Features Biocontrols Inputs
A powerful predator in the greenhouse

Myths and facts about Dicyphus Hesperus, effective in whitefly and spider mite control. 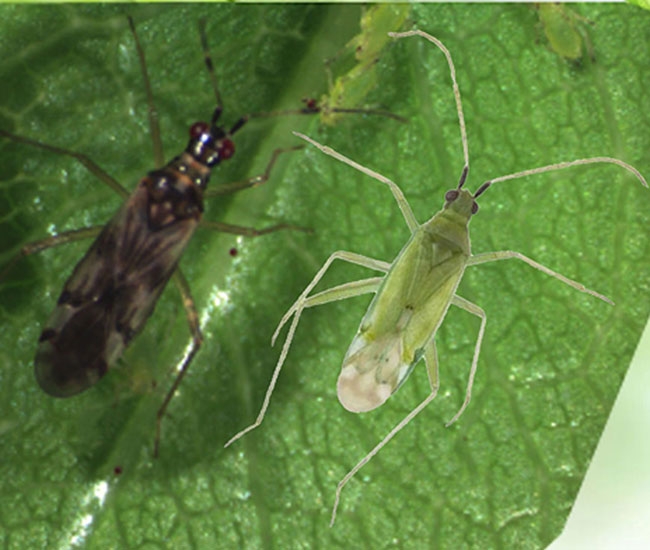 Dicyphus was developed as a biocontrol agent in North America for the same role as the predator Macrolophus in Europe to control whiteflies on tomato crops. Macrolophus is not native in North America and is not allowed to be imported. Dicyphus, like Macrolophus, belongs to family Miridae and share the same characteristics. These bugs are generalist predators having preference for whiteflies and spider mites. They have also been observed feeding on moth eggs and aphids.

Young bugs of both predators are green. Adults of Dicyphus are blackish with mottled creamy wings, and banded antennae. They have red eyes, and an elongated shape like that of Macrolophus.

The predators lay two to three eggs per day in plant tissues, and pass through four to five nymph stages to become adults. Dicyphus develops from egg to adult in 30 days at 24 C. The prevailing environment and availability of good quality food are key factors for the population development of the predators. Young and the adult bugs get water out of plant sap or dewdrops for their metabolic needs. Long legs and their membranous wings enable the predators to walk efficiently over the glandular trichrome on tomato leaves and fly between the plants. Dicyphus has been demonstrated to be a true biological solution of whiteflies on greenhouse tomato crops.

AVAILABILITY AND DISTRIBUTION TECHNIQUES
With Dicyphus hesperus in buckwheat, the introduction rate for preventive applications is estimated to be one to two adult bugs/m2, noting that establishment takes at least six weeks. Sprinkle material on clean rockwool slabs or on leaves. Spread material thinly (maximum 1 cm thick) to enable easy movement of predatory bugs. A combination of mullein banker plant system with the start of tomato crop in the greenhouse and later the augmentative releases have been admired for the excellent control of whiteflies and spider mites. Curative applications are also very effective to control whiteflies on the tomato crops but higher rates of predators per square metre are required. One pack of 250 Dicyphus adults is good to control a whitefly hot spot covering a 25-50 square metre crop area.

IS MULLEIN PLANT NECESSARY FOR THE ESTABLISHMENT OF DICYPHUS?
It is not always necessary to use mullein plants to support development of Dicyphus populations on tomato crops. It is equally good when applied directly onto the tomato crops just like other natural enemies. The mullein banker plants sprinkled with bugfeed provide a secure breeding habitat to the predators and thus assist in developing its populations before whiteflies invade the crops. Use of the bugfeed loose in feeder cups or hanging cards on tomato plants are found helpful to support the establishment of the predators in the crop preventively.

Monitoring: Examine plants with as little movement of the plant as possible because adults and nymphs move quickly and hide in the plant canopy when such disturbed. On tomatoes, adults and nymphs are often found on the mid-canopy to top leaves feeding upon all stages of whiteflies including the minute eggs.

Does Dicyphus go under diapause? The California strain of Dicyphus that is being mass-produced doesn’t get diapause in the greenhouse conditions, which is very much suitable for year-round use as an effective whitefly biocontrol.

Does Dicyphus damage fruits and plants? Dicyphus, like other bugs of its family, sucks a tiny amount of plant sap or dew drops to meet its need of water for digestion and body metabolism. It has been proved through research that Dicyphus hesperus prefer leaves on fruits to get water and did not cause significant damage to the fruits. Feeding specs can be seen on the tomato fruit if the predator population exceeds 100 predators per plant and the pest numbers are very low.

Is Dicyphus a good flyer? Yes, Dicyphus nymphs and adults are good searchers just like other members of the miridae family like Macrolophus and Nesidiocorus spp. Nymphs move from plant to plant, whereas adults can fly efficiently in the crop.

Conclusion: Dicyphus hesperus is a voracious predatory bug that appears to have preference for whiteflies, aphids and mites. They have also been observed feeding on moth eggs and potato psyllids. Adult D. hesperus are very good fliers and will move through out large areas to find pests. Nymph stages of D. hesperus can’t fly but are fast walkers and will move swiftly up and down, and between the plants which are in contact with each other.

When using 25 mullein banker plants, release five bugs/banker plant for six weeks at the start of the crop, following by three augmentative releases directly on to the crop at the rate of 0.15 bugs /m2 weekly or biweekly depending upon the whitefly population. Supplementary use of BugFeed is useful to boost predator populations on the banker plants during the starter phase of first six weeks. When the whiteflies are detected on a tomato crop, the best strategy of whitefly control is to release Dicyphus in batches of 100 adults per spot directly into the infested areas; releases should be continued weekly for three weeks.

Dr. Abida Nasreen is director of research and development with GrowLiv Ltd., www.growliv.com.
Print this page