P. Ravensbergen & Sons (and grandsons) marked the milestone in style with an open house that attracted guests from as far away as the Netherlands. “I am sure my grandparents couldn’t have envisioned what the business would look like today after 50 years.” 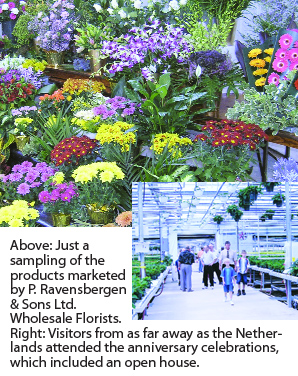 There have been a lot of changes with P. Ravensbergen & Sons Ltd. since the company was founded 50 years ago, including new technologies and a shift in crop focus. But two constants have remained unchanged over that half-century: a dedication to both hard work and to the family’s strong Christian faith.

The Niagara-based potted plant producer and wholesale marketing company hosted an anniversary open house in September to celebrate the milestone, welcoming hundreds of guests and colleagues from as far away as the Netherlands.
General manager William Ravensbergen thanked the guests for attending, noting that “over the years, many improvements and expansions have occurred to the point we are at now. This is something very much to be thankful for. I am sure my grandparents couldn’t have envisioned what the business would look like today after 50 years.”

The company was established in 1956 when Peter and Sophia Ravensbergen, recent immigrants from Rijnsburg in the Netherlands, purchased eight acres of land just west of Smithville, Ontario.

Rijnsburg was, and remains, a major flower-producing centre. Peter had grown tulips there before setting out with Sophia and their seven children for Canada in 1951. They would be blessed with three more children following the move to Canada.

Peter began the tulip business as a part-time venture while working off the farm. He forced bulbs in pint-sized raspberry containers behind the family’s wood stove. The bulbs were sold door-to-door in nearby St. Catharines, with $35 in sales considered a banner day.

With only a pickaxe and shovel as tools, the family dug footings for a 20' x 27' barn, their first farm building. They then constructed a modest 20' x 50' greenhouse, or at least the frame for it, since the bank was not forthcoming that year with a $250 loan to pay for the glass. The following year, with the glass finally in place, they only had enough plants to fill half the greenhouse.

At the same time, tulips were still being planted in the fields. There were about three acres in production.

The business began to grow. Peter was confident enough to quit his full-time job at National Steel Car in Hamilton to devote his full attention to the farm. Gladiolus was soon added to the crop mix. The farm generated only $700 in sales that first year.

The work was hard and labour intensive. Harvesting the tulip bulbs was done with hand trowels. (How busy was the family during this time each year? Eldest son Gerry had to schedule his wedding date around the bulb harvest!)

A mold problem in 1968 led to the end of the tulips. By about 1970, the family had gotten out of field-grown flowers entirely, devoting their attention to potted crops, beginning with mums. Peter had by this time been joined by four sons in the company – Gerry, Rolie, Peter Jr., and Jacob – and they encouraged their father to make the switch.

Since then, the company has experienced steady growth. It encompasses five acres of greenhouses, plus two acres of fall outdoor production.

Today, of the four brothers, only Jake remains actively involved in the business. Peter Jr. passed away in 1986. Rolie and Gerry have both retired.

One reason for the company’s success is that the family has always embraced leading technologies.

The initial soft coal furnace had been hand-fed before a hopper was added. (As an example of some of the early hardships, the family once lost a crop due to a heating system downdraft.) Over time, of course, natural gas boilers were installed.

Prompted by rising fuel prices, a biomass system was installed this fall. They were able to secure a reliable supply of wood chips at a good price. The natural gas boilers will be used as backup.

The initial structures, all glass, were only about four feet tall under the gutter. Since then, additions have grown progressively taller. The most recent expansion, completed in 2005, featured 15-foot-tall poly houses.

Watering was all done by hand initially, before a spaghetti system was installed in the 1960s. This was followed in the early 1990s by a switch to subirrigation, which meant significant savings in labour, along with improvements in crop consistency. There are no more dry pots; they’re all getting the same nutritional attention.

Subirrigation also makes recirculation much easier. Except for the propagation house, everything else is recycled. This has meant reduced fertilizer costs and less impact on the environment.

The move to shipping carts in 1987 also meant significant labour savings. Prior to that, trucks were all loaded by hand, a tedious and time-consuming process.

The market, which used to be local in nature, has become more global, given the rising number of imported flowers.

How the company markets plants is changing. Depending on the time of year and the crop, about 30-35 per cent of their sales are channelled through the Ontario Food Terminal in Toronto. It would have been double that a decade ago. Their fleet of 10 trucks transports plants to customers within about a 600-mile radius of Niagara, as far away as Indianapolis and Chicago.

The company has also benefited from the skills and hard work of great employees, both past and present. “We believe our staff is second to none,” said William.

The family has always enjoyed a willingness to co-operate and work together. “We have faced some problems throughout the years, when the challenges would have seemed to be insurmountable,” said William. “But we were always able to sit down and work things out and keep things going in the right direction. Our Christian faith has given us the strength to deal with those situations.”

The company will continue to grow, he said. “Our hope for the future is to continue to operate as we have in the past, taking advantage of new business opportunities as they arise.”