June 19, 2014, Brantford, Ont. — A pair of major floriculture crops were
in the spotlight during the yesterday’s Greenhouse Canada Grower Day.

June 19, 2014, Brantford, Ont. — A pair of major floriculture crops were in the spotlight during the yesterday’s Greenhouse Canada Grower Day.

Preparing for poinsettias and alternatives for impatiens were two of the talks in the 18th annual event that features seminars and a trade show. “Covering the Bases” was this year’s theme. 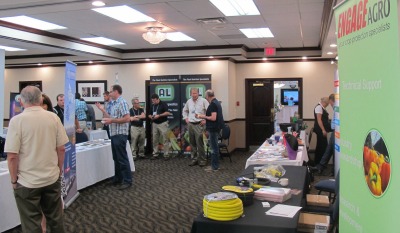 THE LATEST ON POINSETTIA PRODUCTION

Gary Vollmer, global product and technical manager for Ball FloraPlant and Selecta North America, said growers should be looking for ways to drive value back into poinsettias.

Starting off on the right foot means implementing an effective cleanup strategy.

“Disinfest all surfaces in cutting handling areas and propagation areas,” and ensure workers follow strict hand sanitation measures. Footbaths are essential at all entrances to the propagation area.

It’s important to open boxes of unrooted cuttings as soon as they arrive, and keep them cool. “Avoid allowing the cuttings to get hot during handling.”

As the crop matures, high temperatures are the most common challenges facing growers.

When it comes to pinching, don’t leave too many leaves. “One of the most common challenges we see is leaving too many branches,” said Vollmer. “This can cause wider plants and smaller bracts.”

He said the growing environment just prior to the pinch and through to two weeks after the pinch is important. “High humidity is needed to develop the branching evenly.”

Most varieties will begin flower induction in response to shorter light periods, generally from Sept. 10 to Sept. 25. Light pollution must be avoided at night, or it will definitely affect the plants.

Vollmer is quite impressed with the commitment and success of Niagara growers using biologicals to control poinsettia pests, noting most crops in the region are grown pesticide-free.

FERTILIZING: GIVE THE PLANT ONLY WHAT IT NEEDS

Niagara College professor Bill MacDonald touted the effectiveness of fertilizers that include mycorrhizae. This rootzone beneficial fungus is in a symbiotic relationship with roots; mycorrhizae obtain sugars from the plant, and the plant obtains nutrients from the mycorrhizae.

He quoted a study by Plenchette, et al., 2005, in the Canadian Journal of Plant Science, 85:31-40, that concluded: “Mycorrhizal literature is abundant, showing that stimulation of plant growth can be mainly attributed to improved phosphorus nutrition.”

Not many people know about its effectiveness, MacDonald noted, but consumers would be impressed. “We have to educate them and they will be interested in it.” 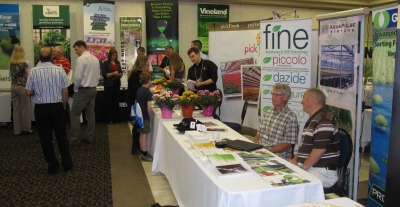 The SOLE (Sustainable Organic Local Edible) movement is growing. “It integrates very well into consumers wanting to grow organically or with less fertilizers.”

Marketing the fact you’re growing with mycorrhizae “could be your competitive edge.”

He noted that a number of soilless mixes include mycorrhizae. However to make sure the spores are viable, “check the best before date.”

MycoActive has a national marketing campaign that’s spreading the word.

A BANKER’S VIEW OF THE GREENHOUSE SECTOR
George Klosler, the Farm Credit Canada district director in Guelph, said communication is the essential to a solid relationship with lenders.

“Like any solid relationship, making sure that the lines of communication are always open between lenders and borrowers is key,” said Klosler.

“That means when things are going well with your business, and more importantly, when they’re not going as well. The earlier you get your lender involved, the better chance you have to come up with a shared plan of attack to make sure the good times return as soon as possible.”

Businesses need a number of tools to help ensure their success. A detailed balance sheet is one example. “You need to be aware of what you own and what you owe.”

GROWER/OWNER PANEL: ARE WE ON THE SAME PAGE?

Danielle Galange, a 2011 graduate of the Niagara College Greenhouse Technician program, is a plug grower at Jeffery’s Greenhouses in St. Catharines. She emphasized the importance of a “team mentality” in helping things run smoothly.

“Lean how to use your team to discuss areas of risk and pass on information,” she said. “Good communication is essential.”

Ted Oorsprong of Northend Gardens said companies are looking for employees “with a passion for the job” and who are committed to learning new things.

New growers should have a minimum of two-years of post-secondary education “or equivalent work experience in the horticultural field.”

Computer skills are essential, along with a basic knowledge of Excel for effective record-keeping.

Effective communication skills are needed to keep everyone in the loop on crop planning and crop timing.

Dr. Michael Brownbridge of the Vineland Research and Innovation Centre outlined some recent innovations in biocontrol.

He noted that a single biocontrol rarely provides satisfactory control on its own. What is needed is a “strategic selection” of several biocontrols, “combined with innovative approaches to enhance their effectiveness.”

He used the example of a thrips IPM program that might involve nematodes, BotaniGard, predatory mites, orius banker plants, trap plants/mass trapping/lures, and pesticides if needed.

In a recent VRIC survey, an impressive 69 per cent of growers used biocontrols throughout their mum and poinsettia crops.

In the survey, the most common reasons for not using biocontrols included low pest pressures, the cost, the perceived lack of efficacy, the lag time until control was obtained, and a lack of knowledge on how best to use them.

The VRIC team is working to post the latest IPM information on the GreenhouseIPM website maintained by Flowers Canada Growers.

John Van de Vegte, project manager of robotics and automation at Vineland, updated some of the projects now underway.

Robotics and automation are important to horticulture since labour represents about 30 per cent of production costs. “The smart use of technology can be used to reduce production costs and improve quality.”

He added that the involvement of growers throughout the technology development process is critical. Much of the trialling work and fine-tuning is conducted in commercial greenhouses.

Vineland has a number of technology partners in the private sector, and works closely with Engineering Technology co-op students from nearby Niagara College.

Projects currently underway include planting and packaging systems in the ornamental sector. Packaging projects in the greenhouse vegetable sector are also being considered.

FLOWERS CANADA ONTARIO: WORKING FOR YOU

He began with an overview of the size of the industry. Canadian floriculture generates some $1.4 billion in farmgate sales, with Ontario accounting for slightly more than half of the total ($736 million). It is the seventh largest agricultural crop in Canada, and Ontario is the third largest floriculture producer in North America.

Flowers Canada Ontario is the official trade association representing greenhouse growers in the province with more than 20,000 square feet of production space. It’s been serving members for 49 years. 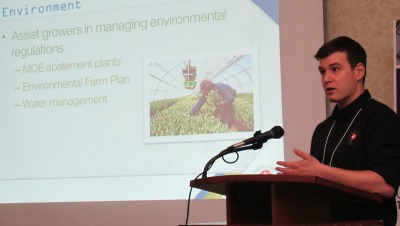 Among FCO’s priorities are:

• Crop management programs, including registration of new pesticides and biocontrols, along with information sharing, i.e., GreenhouseIPM.org and regular workshops.

• Human resources, including close ties with a number of labour management associations (FARMS is an example), and health and safety programs.

• Marketing, including a retailer guide and the popular pickOntario program.

Among major events, FCO hosts an annual pest management conference the day before the Canadian Greenhouse Conference. This year it will be held Oct. 7 at the Scotiabank Convention Centre in Niagara Falls.

Also popular is the Members’ Savings Symposium. The next one will be held in January 2015.

FCO also hosts night school programs, which in the past have covered such topics as workplace stress and pest management. The topics are suggested by growers.

Numerous social and networking opportunities are hosted, such as the annual general meeting (January 2015), and the Cecil Delworth Foundation Golf Tournament (June 25).

Amy Briggs-Macha, a member of the Syngenta Flowers technical services team, outlined ways to minimize the risk of downy mildew in growing impatiens, along with suggestions on crop alternatives.

It’s a tough challenge, she said. “Impatiens walleriana are popular plants at retail and in the landscape.” 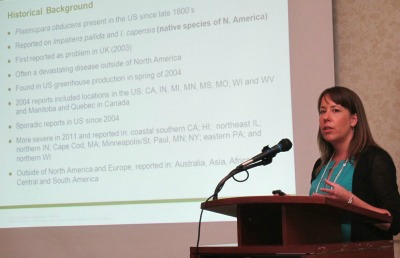 Briggs-Macha says key disease management tactics include sanitation, scouting and cultural practices. “Use a rotation of effective fungicides with different modes of action in a preventive program.”

Foliar sprays and periodic drenches to the growing media to maximize efficacy are also recommended, as is a drench treatment prior to shipment with fungicides demonstrated to minimize risk of early infection in landscapes.

Among cultural controls, use only disease-free propagation material and segregate vegetatively propagated impatiens from seed-propagated impatiens. Maintain moderate humidity levels and avoid extended periods with moisture on the foliage. Scout the crop frequently.

“Think outside the box,” she concluded. “Experiment and consider non-traditional alternatives.”