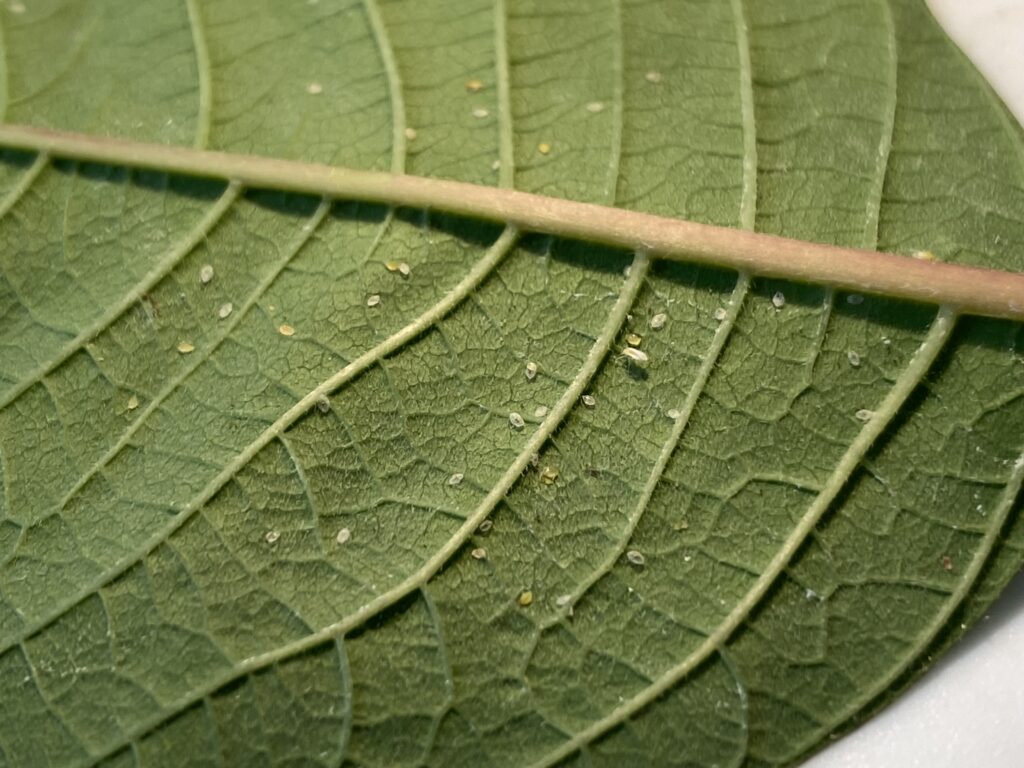 Whitefly pressure was much, much higher than recent years for poinsettia growers in Ontario this past season.

During a discussion at the Sawaya Gardens’ poinsettia trial open house in Waterford, Ont. last November, a number of growers attested to high whitefly (Bemisia tabaci) pressure during various times this past season. Some found them in earlier weeks, others in later shipments.

For Jeffery’s Greenhouses in the Niagara region of Ont., they observed at least five times as much whitefly pressure as they did in previous years while still on the rooting bench, early on in propagation. Shipments to their greenhouse were extremely spotty – some turned out to be highly infested while others were completely clean. Turning over and scouring each cutting tray, they threw out a few hundred cuttings, shared head grower Albert Grimm. Based on their initial observations from weeks 30 to 32, they ramped up their biocontrol program accordingly and spent twice as much as previous years to curb a potentially devastating whitefly problem later on in the season. 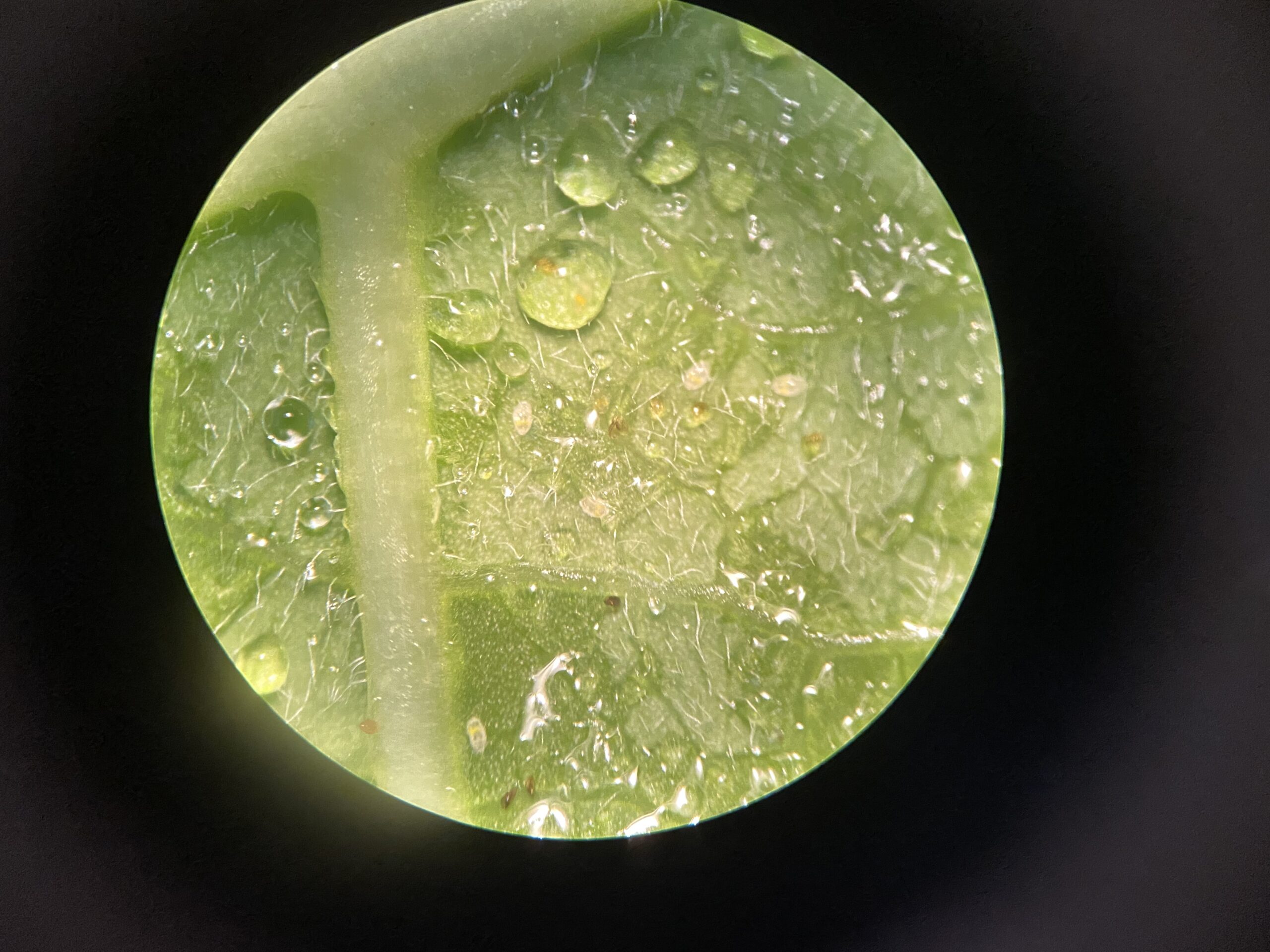 Whitefly Nymphs (1st instar) one week after sticking. These nymphs are not visible, yet, without a magnifier. For this reason, Jeffery’s does not start scouting the leaves until around 14-18 days after sticking. Photo credit: A. Grimm

From experience, Short has found that biological control methods help keep the whitefly from spreading to different varieties in the greenhouse. Furthermore, these practices can help skew the proportion of the whitefly population towards the B-type rather than the Q-type species of Bemisia, where the latter is resistant to most insecticidal sprays. Starting with a biological control program early on would help improve the efficacy of sprays in the fall for a final clean-up of poinsettias, if needed.

A number of poinsettia cuttings suppliers were also present, giving growers an overview of their pest management strategies used in their offshore facilities. They continuously monitor for whitefly on plants, with many relying on chemical-based inputs to keep them clean.

At Dümmen Orange however, technical support specialist Rick Rabb explained that the supplier has implemented biological control on their poinsettia, vastly changing up their approach to pest management. In 2015, the company introduced their GreenGuard program, which builds on foundational IPM principles, monitoring pests regularly and using non-chemical methods when possible. They use spot sprays along with bio-friendly pesticides throughout the timeline of the crop up until harvest.

“We’re making great progress on our biological control,” he said, pointing to not only the poinsettias, but other crops as well, including their spring annuals.

Over the past six years, Dümmen Orange had reduced their chemical inputs by 80 per cent. This past year marked the first entire season where their poinsettia in Ethiopia were entirely grown under the GreenGuard program, and their farm in El Salvador will soon follow. They use predatory mites Amblyseius swirskii or Transeius montdorensis to target whitefly eggs, parasitic wasps Encarsia formosa and Eretmocerus eremicus to manage whitefly larvae, as well as entomopathogenic fungi Beauveria bassiana and Lecanicillium muscarium to manage both whitefly adults and larvae.

For growers who come across infested shipments, one key suggestion was to let the supplier know as quickly as possible. “If we can identify the bench, we can either treat that bench or take it out of production,” said Gary Vollmer, Selecta One’s technical support manager. Using the crop ID tags that arrive with each shipment, his team would be able to trace the contents back to the original house and bench.

As for the 150 different varieties trialled at Sawaya Gardens, plants were propagated by Linwell Gardens then sent to trial organizer Melhem Sawaya. The greenhouse consultant and owner of Focus Greenhouse Management decided not to use chemical pesticides and growth regulators. The result? Very clean plants – save for one or two varieties in white, a colour that has historically attracted more whitefly than others. 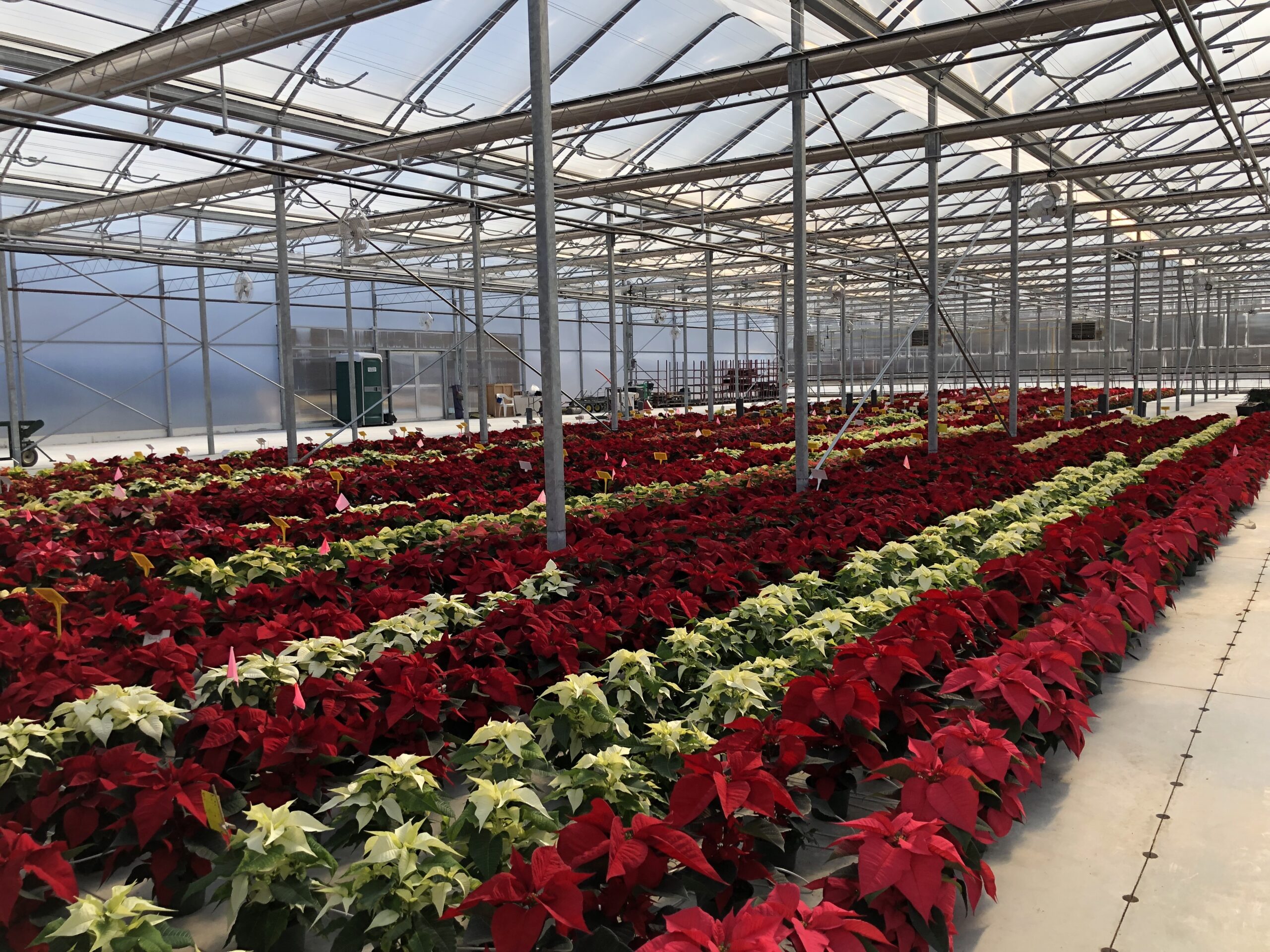 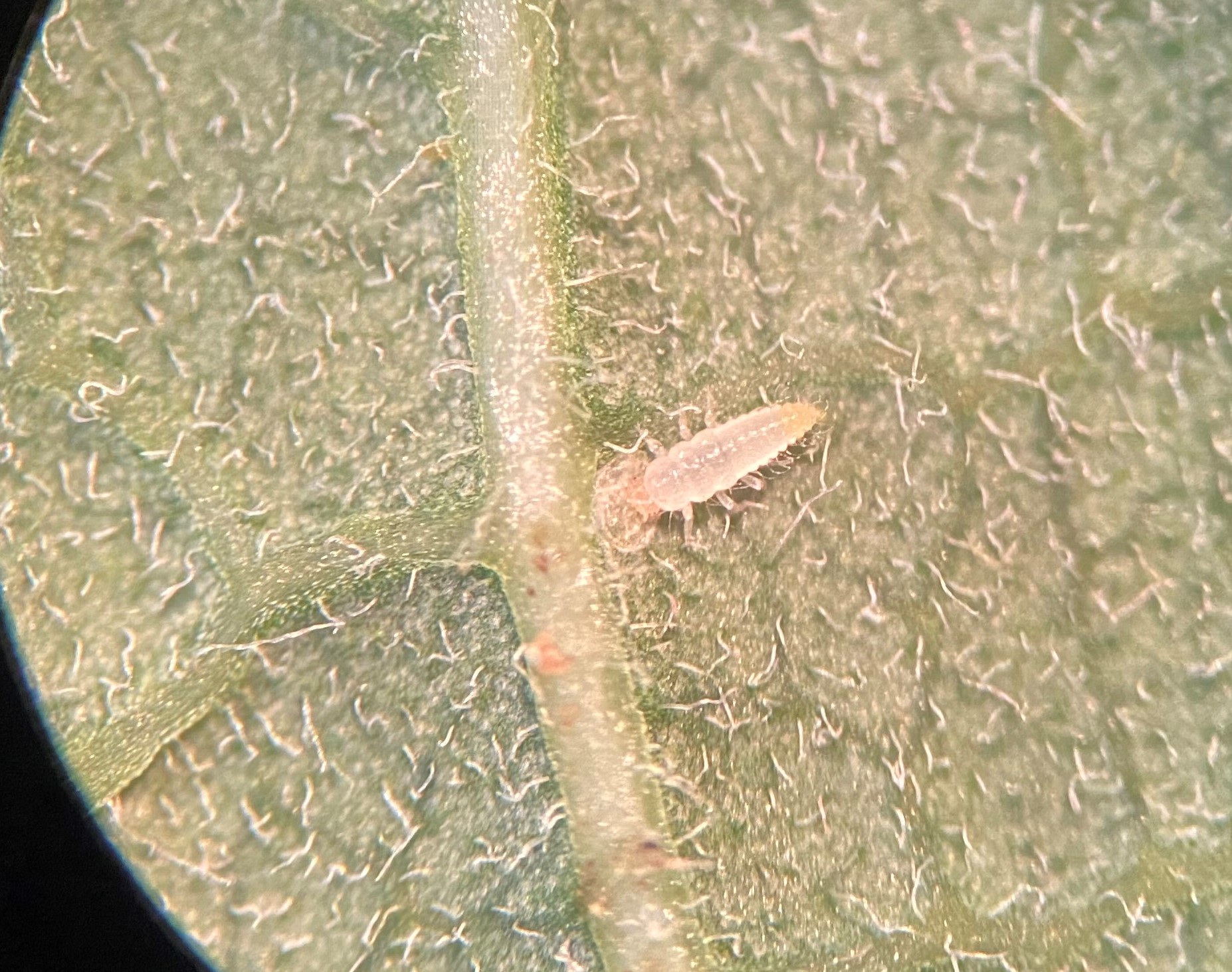 The absence of reproduction in Delphastus is normal, even though the system is doing its job. As Ron Valentin, director of technical business at BioWorks explained, “Delphastus needs to eat 160 whitefly eggs per day to start reproducing.”

While both wasps will feed on both the greenhouse whitefly and Bemisia, Valentin says that parasitism on the latter really requires Eretmocerus. “[With] Encarsia, maximal parasitism on Bemisia is less than 17%,” he says, which is not considered “control.” 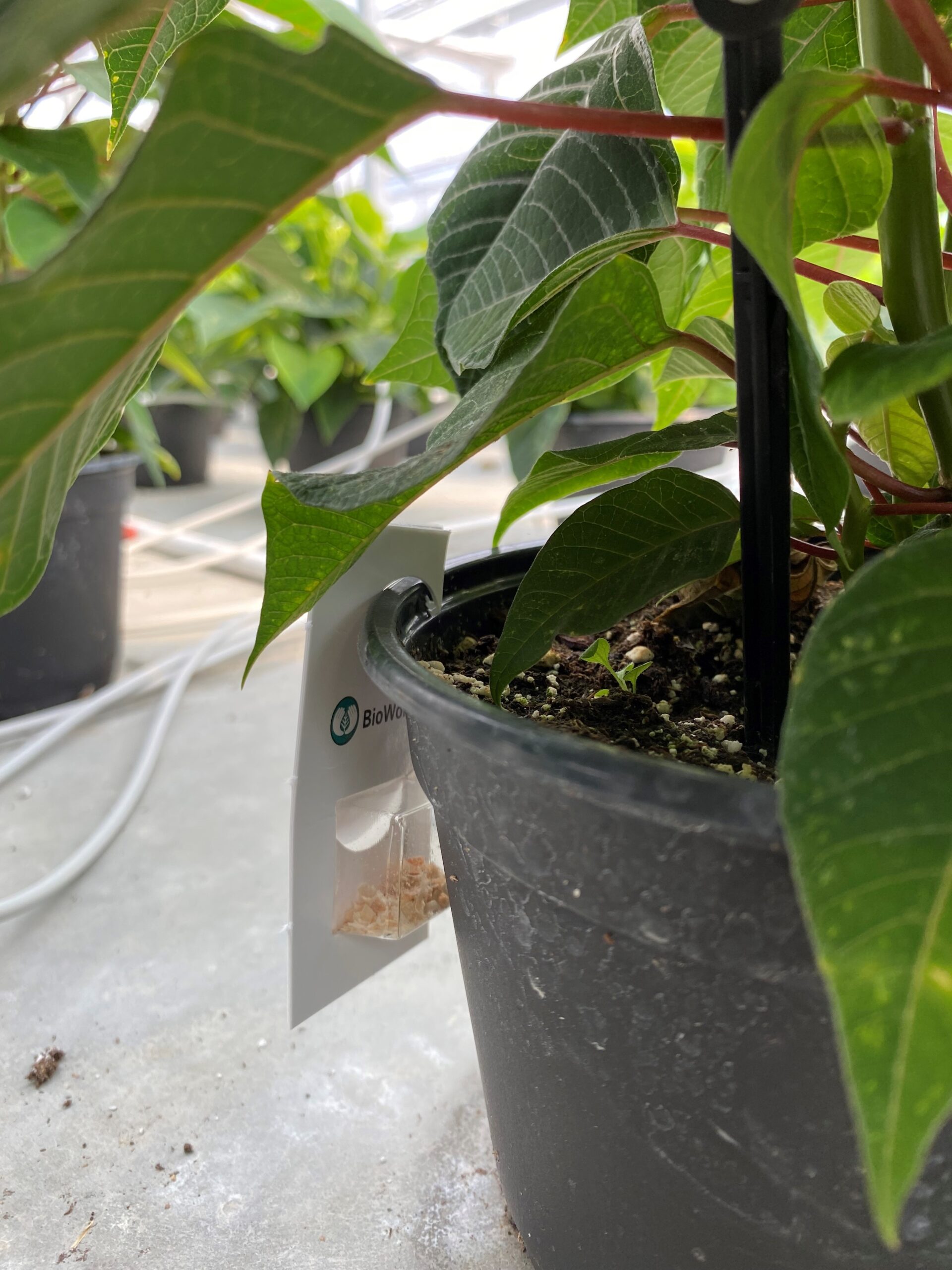 Using BotaniGard at the label rate in a 0.5% (v/v) solution of insecticidal soap, he said, “probably eliminates around 70 to 75 per cent of whiteflies through one dip.” Based on studies in other ornamental crops, he speculated that insecticidal soap may also help reduce any chemical residues lingering on the cuttings. “Knocking your whitefly population back early helps your biocontrol program succeed later on.” Horticultural oils like Suffoil-X– at a 0.1 to 0.25% rate, significantly lower than the recommended spray rate –  are another suitable option.

For a combination treatment of Kopa and Botanigard against whitefly on unrooted cuttings, Vineland recommends 0.5% Kopa + 1.25g/L BotaniGard WP. Rates may need to be adjusted based on crop sensitivity.

For more, see dipping rates developed by Vineland here, a video of Vineland researchers performing the procedure here, as well as Jandricic’s updated article on how, when and why to dip here.

So far, Ference insecticide (cyantraniliprole) seems to be the only pesticide that continues to be effective against the Bemisia whitefly. The product was registered for greenhouse ornamental use in Canada back in 2020.