A survey of some garden centre operators across Canada has revealed that poinsettia sales were flat this past Christmas season while demand for other seasonal items such as boughs and cut greens were up. 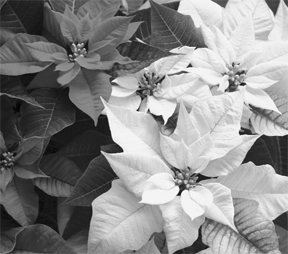 A survey of some garden centre operators across Canada has revealed that poinsettia sales were flat this past Christmas season while demand for other seasonal items such as boughs and cut greens were up.

Karl Stenson, vice-president of Sheridan Nurseries, for example, reports that retails of poinsettias were down a bit at Sheridan Nurseries’ dozen Toronto-area outlets but the decrease was offset by an increase in poinsettias sold for fundraisers. On the other hand, demand for other Christmas items – such as boughs and centrepieces – was up 18 per cent.
“It seems that people were looking for something a little different this year,” Stenson says. “A real problem is that so many big box stores are selling poinsettias. In order to differentiate ourselves from that kind of competition, we add boughs and branches to our bouquets.”

In Quebec, there was a shortage of poinsettia plants this Christmas season. Michel Senecal, the provincial floriculture crop advisor, reports that a number of growers cut their production this year because of poor sales a couple of seasons back. “The market is cyclical,” he says.
On the west coast, John Zaplatynsky of GardenWorks also notes that poinsettia sales were soft this past Christmas season.

“We think there has been a shift to more cut greens, boughs and arranged baskets,”
Zaplatynsky says.  “There was a real glut of poinsettias on the market here. Some growers went out on a limb and picked up the cuttings of growers who went down the drain during the summer. Prices went through the floor. They were selling for as low as 80 cents at the flower auction in Burnaby two weeks before Christmas.”

In Calgary, Janette Eby, Golden Acres Garden Centre’s tropical manager reports that poinsettia sales were down slightly this past season while the demand for cut greens was up. She attributes the drop in poinsettia sales to more competition from big box stores. She notes that customers are beginning to shop for poinsettias earlier in the season.

“We have started selling poinsettias in mid-November, because more customers are buying earlier. People seem to be using the plants for deco-ration.”

Don Fryfogel of Schreimer’s Home and Garden Showplace in Winnipeg reports that his poinsettia retail sales were also down a bit although he wasn’t sure why that was. “We normally produce about 10,000 plants,” he says.

Schreimer’s is one of southern Manitoba’s largest garden centres. In Saskatoon, Dutch Growers Garden Centre’s Elsa Belyk reports her poinsettia sales were also flat. She has a complaint about the white poinsettias she has been bringing in for the last couple of seasons. She points out that the edges are turning brown very quickly and customers are complaining.
“I hope they come out with a variety of white poinsettias that doesn’t get so upset being in a box too long,” she says.

John Zaplatynsky and Janette Eby both note that while customers early in the season are more open to buying new varieties and different coloured poinsettias, once December rolls around red takes over. Michel Senecal reports that red poinsettias account for 80 per cent of sales in Quebec.