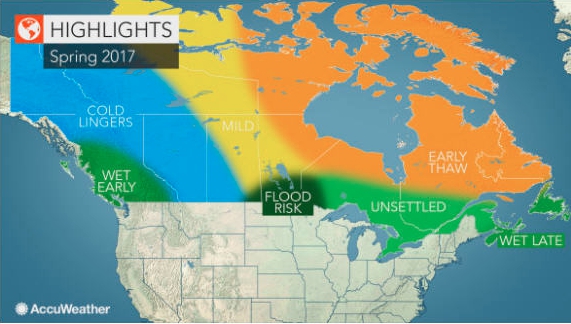 Feb. 16, 2017 – AccuWeather reports the cold and stormy weather pattern that has dominated western Canada this winter will continue into the spring, providing excellent conditions for ski resorts across the region.

Meanwhile, wet and cloudy weather will take hold around the Great Lakes and in some of Canada’s largest cities before being replaced by warmer, more spring-like conditions.

The active weather pattern that has persisted across western Canada throughout much of the winter will continue to deliver rain and snow to the region into the spring.

“The first half of the spring is expected to remain chilly and wet across British Columbia with additional opportunities for heavy snowfall in the mountains through April,” AccuWeather Canadian weather expert Brett Anderson said.

Some of the stronger storms that move into the region could bring heavy rain and strong wind gusts near the coast and metres of snow to the high elevations of the Canadian Rockies.

While these storms may bring major disruptions to travel and daily routines, the snow that falls over the mountains will be beneficial for ski resorts across the region.

Even though the frequency of storms is expected to decrease during the second half of spring, the snowpack built up in the mountains should result in a longer-than-normal ski season.

RAIN, SNOWMELT TO CAUSE FLOOD RISK IN EASTERN PRAIRIES

The changing of the seasons will bring the risk of flooding across part of the Canadian Prairies, especially as temperatures rise later in the season.

“A combination of above-normal winter snowfall, unusually high river levels and the potential for ice jams will lead to a major flood risk in low-lying areas near rivers and streams from southeastern Saskatchewan into portions of northwestern Ontario,” Anderson said.

Winnipeg and Regina are among those that could be at risk for spring flooding.

A wetter-than-normal spring can exacerbate flooding issues in this region.

Much of Ontario and Quebec will have to wait until the second half of the season for true spring warmth to take hold.

Spring will get off to a rather cloudy, chilly and damp start across southern and central Ontario and southern Quebec, Anderson said.
This includes Toronto, Hamilton, London, Ottawa, Montreal and Quebec City.

However, a shift in the weather pattern will eventually usher in warmer air, marking the end of dreary days experienced during first part of the season.

“There will be a significant turnaround to much warmer weather during April with the potential for some early summer-like warmth in May,” Anderson said.

While the weather gradually turns warmer and drier around the Great Lakes and across the St. Lawrence River Valley, Atlantic Canada could endure stormy weather in April and May.

“A wetter pattern may set up over coastal Atlantic Canada later in the spring with below-normal temperatures,” Anderson said.