Features Water and irrigation
Planning for more resourceful water use

Ensuring water security both in and outside of the greenhouse.

Water is absolutely essential for us and the planet we live on.

In Canada every province and territory has a program for water governance. Agriculture is a major user of freshwater resources and within it, horticulture and greenhouses are at the forefront of conscious water use.

According to UNESCO, “Freshwater is the most important resource for humankind, cross-cutting all social, economic and environmental activities to achieve water security, we must protect vulnerable water systems, mitigate the impacts of water-related hazards such as floods and droughts, safeguard access to water functions and services and manage water resources in an integrated and equitable manner”.

It’s important to be aware of the water-related challenges that are developing and the ways in which we should handle our water resources. While it is essential to reduce water use and safeguard our water systems, it’s also important to ensure water quality for healthy crops at the greenhouse level. In fact, when growers approach me about building a greenhouse, my first suggestion is to buy a property with access to good quality water. Water management and water security – both from a farm level and from a regional or global level –  are absolutely essential.

The idea for this article started from a request by a greenhouse vegetable grower who also happened to have a field market garden. They asked whether I could take a look at a few pictures of their cucumbers, tomatoes and peppers which seemed to be showing symptoms of nutrient deficiency or possible toxicity. I asked them to send the photos, along with information on fertilizers being used and any recent lab analyses of raw water and leach. 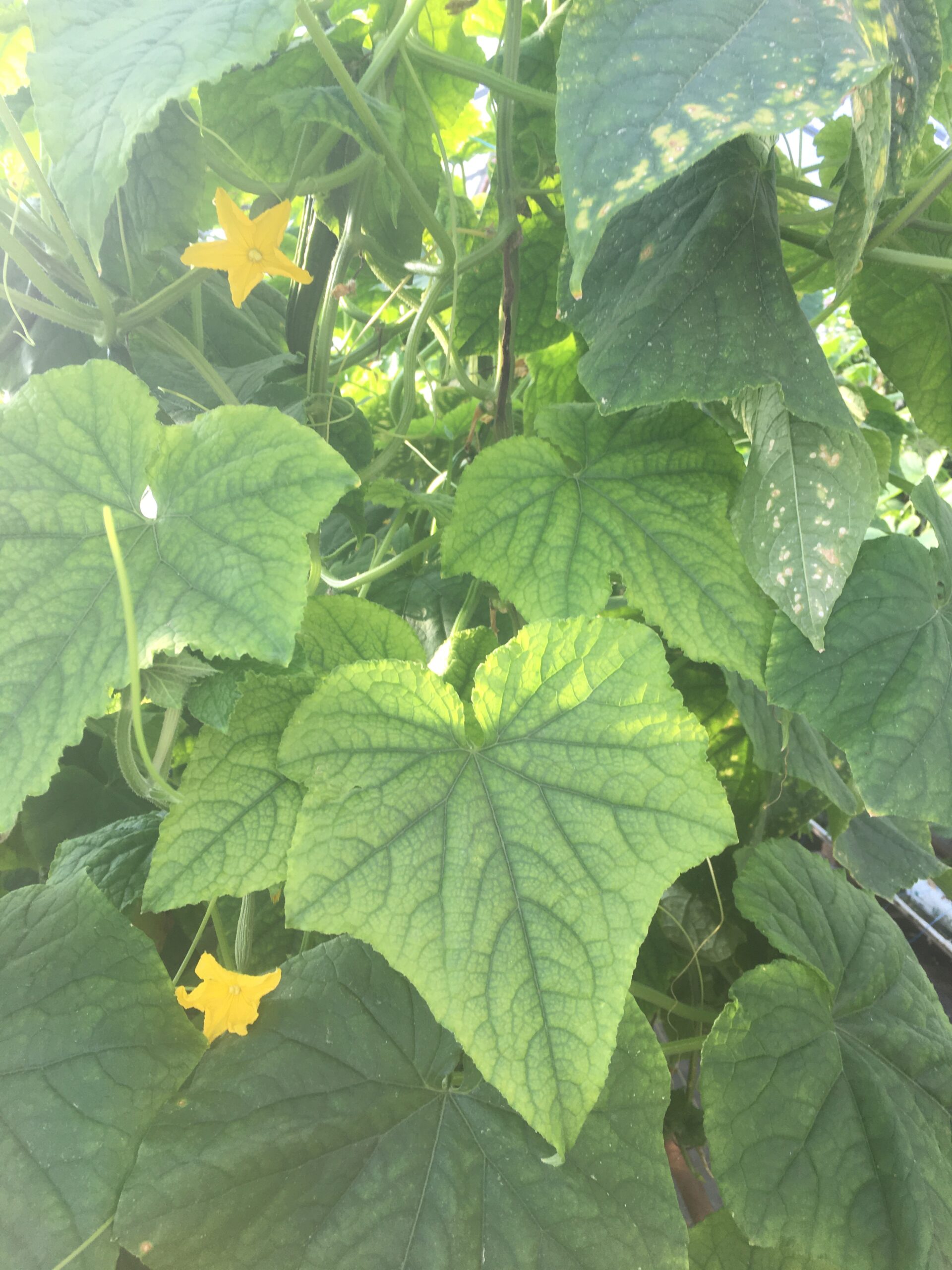 A grower submitted a photo of this cucumber showing some type of deficiency.

A picture of cucumber leaves came in and it was a simple diagnosis: Iron deficiency caused by either not enough iron in the fertilizer program, which is rare, or their pH going over 6.4 in a soilless growing medium, which was coir in this case. Tomatoes showed blotchy ripening of fruit, leaves curling and magnesium deficiency on lower leaves. Peppers showed lots of leaf curling, poor fruit sizing and some blossom end rot.  Now the question was, what to do to correct the problems? 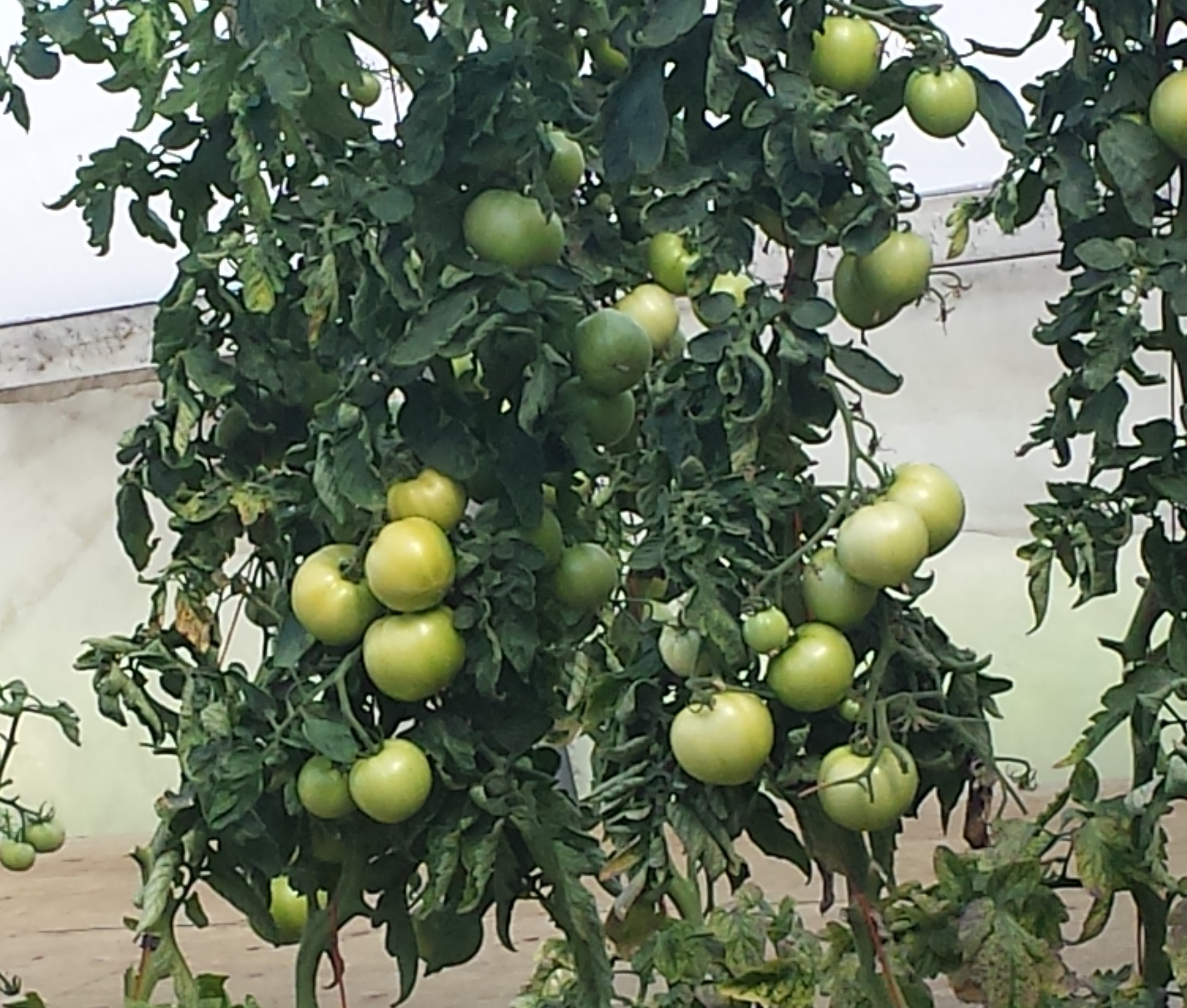 A look at the fertilizer program showed that all of those nutrients were in order. The ratios of nitrogen to potassium, calcium to magnesium, phosphorus to zinc, and iron to manganese were within acceptable levels. But when I looked at the actual nutrient solution analysis, sodium and sulfates levels were above the desired ranges. My immediate questions were why and where did this sodium come from?

The grower’s own water supply had been low, so they searched for water from other farmers in the area who had dug outs or ponds. Most of the farmers indicated that, due to drought conditions, they did not have enough water to share. Finally the grower had found one farmer who was willing to share water. The water was trucked in, and it had high sodium levels of over 300 mg/L. As it turned out, this farmer was putting waste water from reverse osmosis (RO) into his dug out. Thus, the entire water supply became contaminated with high sodium.

The decision to truck water from an unknown source without first testing it proved to be a costly mistake. The greenhouse grower’s own dugout is now contaminated with high sodium. Sodium destroys the drainage in growing media, resulting in waterlogging and drops in oxygen levels. Under those conditions, roots are no longer able to absorb many of the nutrients and iron is at the top of the list. I asked the grower to consider installing an RO system. It’s a relatively expensive option, and the grower is currently assessing their financial resources.

As operators and growers, how can we ensure greenhouse water security?

First, plan your water use based on the crop’s needs and other uses like fogging and misting. This is usually done when planning a greenhouse build or expansion.

A good example of this is another case, where a grower wanted to expand but their existing water supply was not adequate for the expansion. Well water had higher sodium, so the possibility of an RO unit was discussed. This time, the biggest challenge was not the cost, but in how the waste water would be disposed of.

Calculations determined that the removal of 300 mg/L of sodium from a total of one million litres/year would come to 300 million milligrams. That translated into 300 kg of sodium. This calculation helped the grower plan suitable ways and means for handling the high sodium waste water. Putting it back into the water supply was definitely not an option, particularly for dugouts or cisterns in the greenhouse.

For the time being, the grower is using water from another dugout with low sodium, regularly monitoring sodium accumulation in the growing medium and leach water while making adjustments with higher potassium feed. Sodium is not an essential element for growth but plants are non-selective, so by keeping higher potassium than sodium, one can minimize the effect of sodium. However, sodium still has to be managed in the growing medium and in the leach water.

As for water sources, I know most greenhouse growers collect rain or snow melt water, then put it into storage tanks. That is a good step for ensuring water security, however, lots of water and or nutrient solution is typically used for leaching through root zones. While this practice is intended to reduce salt levels in the growing medium, I think we are using excessive leaching and thus leading to wasted water. Many growers collect that leach and recycle it, combining one-third leach with two-thirds fresh solution.

Table 1. Feed and leach data on a tomato crop

Table 1 shows an example of a situation where overdrain was not helping in bringing down the EC in the root zone of a younger tomato crop grown under supplemental light. One can see that in spite of significant leaching, the EC of the rockwool growing medium did not come down. In my opinion, the practice of heavy leaching is not conducive to water and nutrient conservation. Adjust the amount of water to reflect the amount of light available inside the greenhouse to meet the evaporative needs of the plants. The general formula still holds true in most cases: For each one joule of light, apply 3 ml/m2. So for each 100 joules, apply 300 ml/m2 and for each 1000 joules apply 3L/m2.

One key area to take note of is potential water contamination. If contaminated by herbicides, this poses a serious danger to water security. The entire water reservoir can be rendered unfit for use. I have seen situations where millions of litres of pond water were contaminated by long lasting herbicides, and the cause was only discovered when plants started showing symptoms. Grower suffered serious economic losses. By the time charcoal filters were installed, it was too late.

As a preventative measure, growers should have their water analyzed for herbicides before use and also set up bioassays for herbicide presence. This includes growing sensitive plants like tomatoes or germinating lentils. Always establish controls where distilled water is used for comparing symptoms.

There are many other aspects of water management that feed into water security of the greenhouse, including water use efficiency, recycling of waste water and planning for future use. Note that some production technologies claim that plants grown in their system use 95 to 99 per cent less water but make the comparison to field production or leave out mention of what they’re comparing to.

In summary, water security should be taken seriously. Greenhouse grower are already at the forefront of using technologies to manage water and my hope is that they will continue to do so from every angle.