Some 20 growers have already signed on with a two-year commitment to this marketing venture, with funding available to deck out 20 more vehicles.

”This is going to give Pick Ontario a lot more exposure,” explains Ted Oorsprong of Northend Gardens, “and will mean growers will be much more actively involved.” 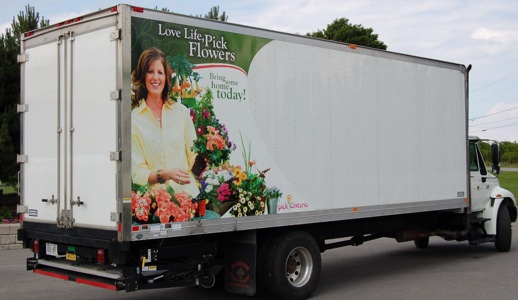 Funding is available for one truck per company, though additional vehicles can be included at the firm’s own expense. And it’s anticipated many will consider such an investment. ”It’s a source of pride in their industry,” Oorsprong explained,” and a great way for growers to get involved. It’s the industry working for the industry, and this is going to help everyone.”

These moving billboards will be quite noticeable throughout Ontario and well into other markets. “Our trucks are on the road every day and traveling considerable distances, so this is going to give us great exposure. People are going to see it (the Pick Ontario message) everywhere.”

The PickOntario campaign was launched in 2007 and has received support through The Ontario Greenhouse Alliance (TOGA) from the Ontario Rural Economic Development Program, the Agricultural Adaptation Fund, and OMAFRA. Information on how growers can get involved is on the campaign web site at www.pickontario.ca. They must be a member, or an affiliate, of Flowers Canada Ontario.

There are over 250 floriculture producers in Ontario who employ more than 20,000 employees and generate farm gate sales worth $774 million, with a total economic impact of $1.64 billion on the Ontario economy.