Thrips parvispinus outbreaks have become more frequent in ornamental crops in the Netherlands. 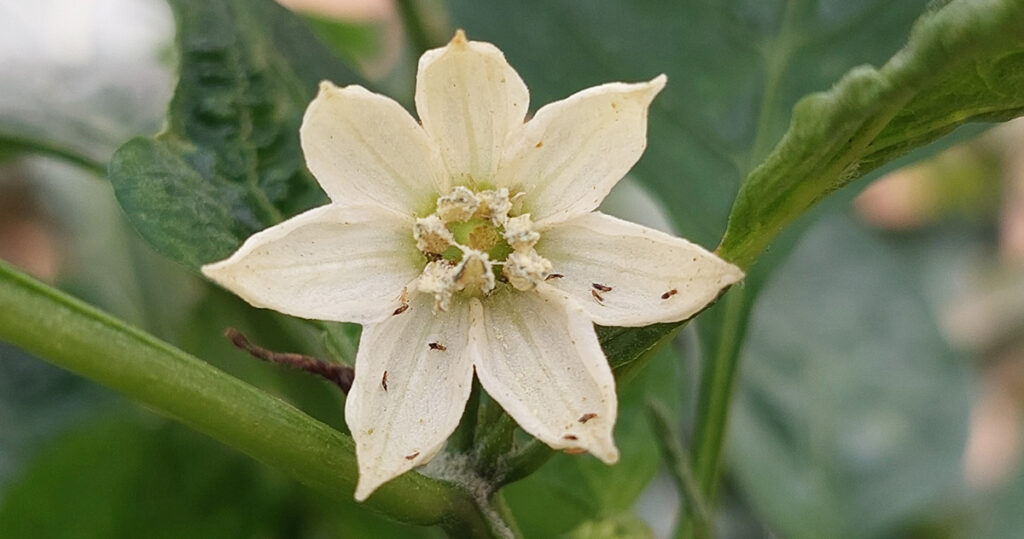 According to a new report published by Biobest, pepper growers in Northern Europe need to remain vigilant for a potentially damaging new thrips pest species.

“Over the past 4-5 years, Thrips parvispinus outbreaks have become more frequent in ornamental crops in the Netherlands,” said Koen Merkus, IPM and Pollination Specialist at Biobest. “They have generally been found in tropical foliage plants, hiding in new, rolled-up leaves – making them difficult to target with sprays.

“The predatory mites, which form the backbone of effective WFT control strategies, appear to behave differently; they predate less on parvispinus and are so less effective,” mentions Koen. “To compensate, Dutch ornamental growers are employing higher rates of Amblyseius-System (Amblyseius (Neoseiulus) cucumeris) to slow down pest development.

Generalist predators – such as Orius-System, Macrolophus-System, and Chrysopa-System – perform well on pollen-producing plants, such as peppers, and can feed on parvispinus. However, on pollenless ornamental crops, they do not establish as well. It will be more challenging to develop effective control strategies for ornamentals,” he warns.

To limit damage in pepper crops, Koen advocates growers should aim for timely and correct identification of parvispinus. However, he warns the tiny pest can easily be confused with Echinothrips americanus.

“Echinothrips is dark coloured with a reddish, dark brown neck,” explains Koen. “Parvispinus is subtly different – while also having a black abdomen, its rear and middle thorax segments are yellowish brown while the front segment and head are brown.

With no silver bullet to control this pest, to minimise damage Koen recommends a preventative, rather than curative approach.

“As things stand, we urge pepper growers in Northern Europe to remain highly vigilant and introduce higher rates of predatory mites and Orius-System as soon as the pest is confirmed,” he says.

The Biobest team is working on developing targeted strategies for different regions.