How a former garden centre owner started a medicinal cannabis operation - and continues to grow it. 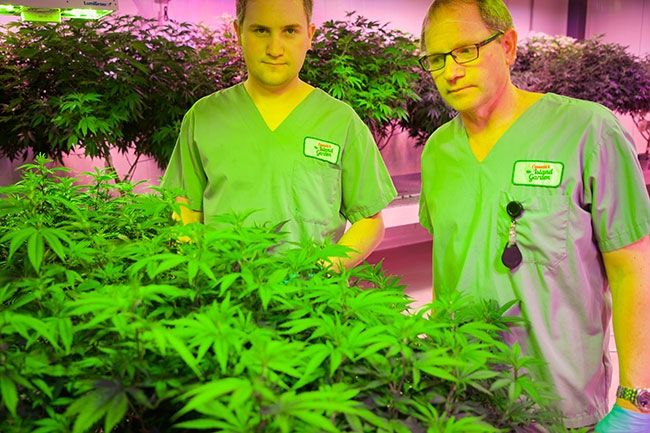 He notes that banks do not want to loan money to marijuana-growing operations. So he had to find other lenders and investors and bring them on board. He was able to bring four Islanders and one Nova Scotian to the table. That’s where the initial start-up money came from to get things off the ground. He had received his letter from Health Canada in January 2014 and had to meet two conditions i.e. pass security clearance for all senior staff and be able to build a building.

Locally, the government had nothing to say about the kind of building that would be erected. Jewell says there was no PEI government money going into this venture, so they were not initially involved. “We had to work with engineers and all aspects of the building were designed to meet HVAC regulations.”

He says “cuttings” are taken from the mother plant, and that mother plant is coming from a national operation that is also licensed to grow medicinal cannabis. These cuttings then spend two weeks to root, two weeks to grow vegetatively, then eight weeks to flower. He indicates that the new cuttings need to be kept very cool, so misting is done every 30 minutes for under a week. Past this stage, the plants themselves grow quite warm between 26 to 28 degrees Celsius. From cutting to finish, “it takes a total of 12 weeks to get to the harvest stage,” says Jewell. “At the end of the day, it’s a plant that has the same basic needs as any other plant.”

He says the cannabis operation sells in 10-gram sizes in plastic bottles similar to what you would find in a pharmacy.  “All clients would be registered with us and have all the medical documents from their doctor … just as they would with a pharmacy,” offers Jewell.

With all Health Canada quality control specifications in place, Jewell says the bottle/vial of medicinal marijuana can be traced back to the plant it came from. “We have a Standing Operation Procedure SAP and if Health Canada wants to see what we’ve done, and are doing on any given day, we have video to back that up.”

“People can vape it, smoke it, or a lot of people can use the oil,” notes Jewell adding, “Some people may have been taking opiates for pain relief and were not doing well on them. But with medical marijuana the quality of life is greatly improved.” He adds that with the oil, some people will drink it in another beverage.

Jewell says his clients/customers for the medical marijuana are from all walks of life with most being Islanders, while others are in the Atlantic region as well as across Canada. All product is delivered by Purolator Courier and is moving faster than the operation can produce it.

With start-up funds in place, and the criteria set out for him, Jewell was all about optimism and broke ground in the spring of 2015, a year before he got his Health Canada license to grow. Jewell says what he is doing now is in line with what he has done his whole life.

He owned and operated Jewell’s Country Market in York, PEI for about 20 years. That business was put on the market when he started the medical marijuana operation and sold last year.

He now points out that he had to deal with politicians provincially regarding his new business, and found there were some local politicians who had personal beliefs, (about growing marijuana).

He applied for the licence in 2015 and admits everything was a challenge, and says, “No one knew, at that time, the regulations were going to change.” By that he means the announcement from Prime Minister Justin Trudeau in the spring of 2017, that recreational marijuana would become legal on July 1, 2018.

While the time frame surrounding that may have moved, the promised legalization prompted Jewell and several others across the country to up the ante and advance from growing medical marijuana to diving into the recreational market.

Again he is looking for investors and says, “There will be no money coming from the province.” Right on the heels of his first high-demand, successful year with the medicinal marijuana, Jewell was approached by an American tobacco company, Alliance One International (AOI) in November 2017, and according to Volker Lauterbach with AOI, he and his colleagues were impressed with what Jewell had built. “The professionalism and quality of the product (impressed us).” says Lauterbach. “CIG’s and Edwin’s values seemed like a great match with what AOI stands for.”

“AOI will be financing the expansions and will have to find the funding through their own means,” says Jewell. He says they will build 160,000 square feet of greenhouse space in 2018, with another 90,000 square feet added next year. There will be a 54,000 square foot supporting warehouse. “In two to three years, our business will grow 25 to 30 times bigger,” he says.

The new expansion will be built to comply with the regulations as laid out by Health Canada. “They will issue a license for us to grow in that expansion once they are satisfied that our new building has met the regulations.”

He notes that the process will be similar to the first building. “However, we now have a successful track record with Health Canada and have proven to them that we are capable.”

These are lofty aspirations for the greenhouse CEO whose beginnings were from a playpen in his parent’s greenhouse. “So I have been working in greenhouses all my life and growing cannabis is not that far removed from growing other plants,” he says

While Lauterbach did not reveal the dollars involved in the deal, where AOI bought 75 per cent of the entire operation, he was quick to point out that, “All parties involved are coming out winning.”

AOI has also purchased 80 per cent of Goldleaf Pharm Inc. in Simcoe, Ontario and Lauterbach notes, “The two investments so far are a great starting point but we remain interested in strengthening our operation if we come across the right opportunity.” He points out that the two operations that AOI has purchased come under the umbrella of Canadian Cultivated Products, which was renamed to FIGR Cannabis Inc., of which he is the president.

In keeping with Jewell’s mindset of hiring all local people, growing his businesses and strengthening PEI’s economy, AOI will hire all local people for both their (Canadian) entities.

“We will create jobs locally and hire all local talent,” notes Lauterbach.

Jewell says it is a $15 an hour job for locals and offers that his current 20 employees will grow to upwards of 100 to 200 when he has the recreational marijuana greenhouse up and running.  Jewell states that CIG is still selling to their medicinal marijuana clients, and will continue to look after them, “As we have done so far.”

He points out that the cannabis they are growing now could be sold to the medicinal market or saved and sold into the recreational market when it opens up. Some of the cannabis grown here has THC and some has not. CIG will be supplying the province with one thousand kilos in the first year (of legalization). “Just so the province can supply the four stores.”

Those four stores Jewell talks about will mean one located in the Island’s capital city, Charlottetown, one in the neighbouring city of Summerside; one in the town of O’Leary in the Prince County area of the province and one in the town of Montague, in Kings County.

“The regulations in Canada have evolved and are evolving. We had no idea that would happen (the legalization) and we see it as an opportunity,” notes Jewell. He points out that cannabis is in all communities so the legalization is a chance to cut out the black market …”To stop illegal activities.”

Edwin Jewell and his son Jordan looking at new cuttings.

Editor’s note: At the time of original print, Bill C-45 had just passed its third reading in the Senate on June 7, 2018.