University of Guelph researchers are finding this method doesn’t work for crops in all growing environments. 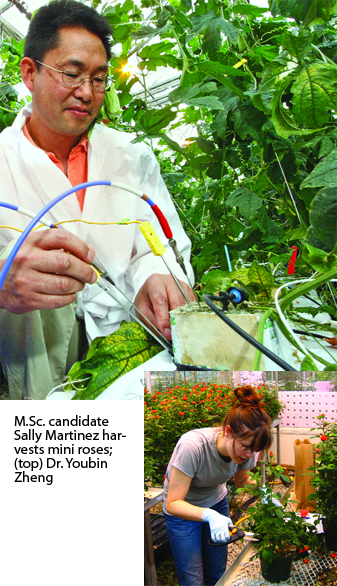 The greenhouse industry has been quick to adopt a new technology that super-saturates irrigation solution with oxygen. It’s thought to increase crop growth and productivity, while reducing pest susceptibility. But, University of Guelph researchers are finding this method doesn’t work for crops in all growing environments.

“Oxygen enhancement doesn’t work in every situation,” says Dr. Youbin Zheng, Department of Environmental Biology. “Growers have to examine their growth media and irrigation methods to see if super saturation will work for them.”

It’s long been known that plant roots need oxygen. Zheng points to the example of plants that get over-watered. Too much water and not enough oxygen means the plants die.

In greenhouse situations, environmental stresses such as high temperature decrease root zone oxygen levels, causing the roots to become weakened. During summers in Ontario, the temperature inside greenhouses can pass 40ºC. From this stress, oxygen in the crop root zone decreases to approximately two parts per million (ppm) when crops are grown in rockwool. This is far below the normal eight- to nine-ppm range needed for plant sustainability, says Zheng.

This situation opens the door for plant pathogens such as Pythium to infect and cause root rot, leading to plant death. Some plant pathogens such as Pythium are often present in the soil and irrigation water. But while healthy plants can fight off the diseases, weakened ones can’t. To give the plants a boost, some growers have been super-saturating irrigation solutions with high oxygen levels.

Zheng wanted to find out if this technology worked. In one study, he examined tomato and mini rose plants grown in solution culture under different oxygen levels for weeks. The plants were then inoculated with Pythium. Zheng found that plants with enhanced oxygen levels between eight and 20 ppm were more resistant to the Pythium. Enhancing beyond 30 ppm of oxygen caused root damage, Zheng found.

In another study, he grew cut roses in coco coir, a medium made from coconut fibres. When irrigation solution oxygen levels were increased as high as 40 ppm, the plant suffered no harm. In fact, as oxygen increased, productivity also increased, resulting in heavier, longer stems with more roses.

But not all of the studies using oxygen enhancement were so successful.

Cucumbers grown in rockwool and mini roses grown in Pro-mix showed no benefits from increased oxygenation. Zheng suggest that something within the growth media and irrigation system was consuming the oxygen so it was inaccessible to the plants. He says further research is needed to tweak enhanced oxygenation to possibly work for these crops and growing media combinations.

If growers have crops growing in solution culture and use enhanced oxygenation, Zheng says there are benefits beyond increased productivity. Because the system uses oxygen removed from the air and dissolves it in water, it’s environmentally friendly. Also, because no chemicals are used, the system is viewed favourably by consumers. It’s a one-time cost, albeit expensive.

In further research, Zheng is bringing science to another issue facing greenhouse growers: finding the optimal irrigation schedule. He says that though technology in Canadian greenhouses is very advanced, many growers currently use a rather low-tech method for measuring water levels – their hands and eyes. Zheng hopes to develop a computer-based sensor system to improve productivity and decrease stress on the crops.

Also involved in the oxygenation research are Prof. Mike Dixon, technician Linping Wang and graduate students Sally Martinez and Johanna Valentine, all of the Department of Environmental Biology.

Additional funding is provided in part through contributions by Canada and the Province of Ontario under the Canada-Ontario Research and Development (CORD) Program, an initiative of the federal-provincial-territorial Agricultural Policy Framework designed to position Canada’s agri-food sector as a world leader. The Agricultural Adaptation Council administers the CORD Program on behalf of the province.

Matt Teeter is a writer with the SPARK (Students Promoting Awareness of Research Knowledge) program at the University of Guelph.