While fruit drop is generally the most obvious sign of infestation, this symptom typically indicates a serious level of infestation; at this point, prevention measures are useless. 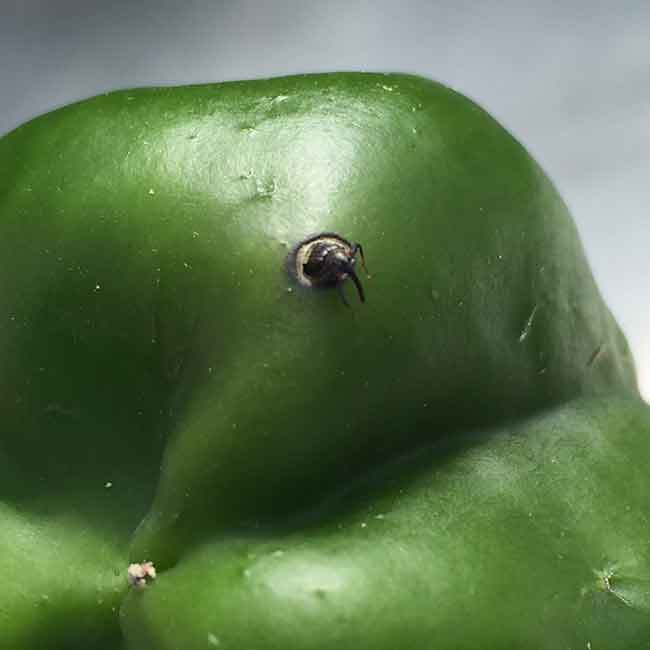 November 2016 – The pepper weevil (Anthoomus eugenii) [Figure 1] is recognized around the world as a serious pest that can have potentially catastrophic consequences for pepper growers. The pepper weevil is so named because its larvae develop only on pepper and eggplant crops, which are members of the Solanaceous plant family.

While adult weevils do feed on other Solanaceous plants, specifically potatoes and tomatoes, there have been no reports of eggs laid on these species. Nightshades and burs act as important over-winter hosts.

We probably don’t need to tell you that pepper weevils cause substantial, measurable amounts of damage in their host plants. While fruit drop is generally the most obvious sign of infestation, this symptom typically indicates a serious level of infestation; at this point, prevention measures are useless.

Adult pepper weevils feast on leaves and blossoms, and both adults and larvae bore into young fruit pods in order to feed on their seeds  [Figure 2] Typically, infested fruit pods become discoloured and abort after withering at the stem and/or calyx  [Figure 3].

In hot enough weather, pepper weevil generation time can be as short as two weeks. Even worse, the punctures they create in peppers open up dangerous holes that both plant and human pathogens can penetrate. As this invasion can result in illness, a pepper weevil infestation is a legitimate food safety issue.

PESTICIDES
Once the pepper weevil has laid its eggs in the pepper, there is no pesticide available that can knock down the population.

The unfortunate reality is that no known pesticide can provide complete control over pepper weevils. Because pepper weevil larvae are cozily protected inside the pepper, sprays and even systemic pesticides are largely ineffective. In many cases, adding pesticides can have detrimental effects on a biocontrol program, which has the unintended result of inviting more thrips outbreaks.

BIOLOGICAL CONTROL
There are a number of known parasitoid species of the pepper weevil. We consider the egg of the pepper weevil the stage most ecologically susceptible to be parasitized; it is deposited close to the surface of the pepper fruit and therefore more accessible to parasitism than later stages, at which point the infestation is located deeper within the interior of the fruit.

Some potentially effective parasitoids include Triaspis eugenii and Urosigalphus species. The former, according to Eugenio Mariscal and his team, has high levels of parasitism (18-40 per cent). Unpublished data from Santiago Suchilquitongo, Oaxaca, indicates that the Urosigalphus species can parasitize almost 30 per cent of the population of the pepper weevil in insecticide-free experimental plots. Both species are solitary parasitoids that attack the egg of their pepper weevil host. The parasitoid develops inside the pepper weevil egg, throughout its early instars, and emerges at the end of the last instar to completely consume the unfortunate host.

The key to effective biocontrol is to employ synergy of multiple different egg-parasitoids and larval parasitoids. No individual parasitoid is enough to give acceptable levels of control.

The key to effective biocontrol is to employ synergy of multiple different egg and larval parasitoids. No individual parasitoid is potent enough to produce acceptable levels of control. Sadly, there is no commercial rearing of the aforementioned parasitoids, so these species are only available in the field. I highly recommend that government research institutions embark upon developing protocols to rearing these parasitoids on a massive scale.

There are some entomopathogenic fungal species that are known to infect pepper weevils. Microbial control could become a viable option that fits well into existing bio-control programs. Crop Defenders Ltd. is investigating microbial species that could prove to be game changers for pepper growers.

BOTANICAL AND OTHER NATURAL CONTROLS
Pyrethrin is the most common botanical compound used to control pepper weevil. Critically, it is acceptable for use on organically certified produce. Pyrethrin is a compound derived from a chrysanthemum flower extract that affects the nervous system of insects. It causes multiple action potentials in the nerve cells by delaying the closing of an ion channel. It is one of the least poisonous insecticides to mammals and birds, but it is highly toxic to fish, tadpoles, aquatic invertebrates, and beneficial insects such as the honeybee.

Products based on azadirachtin, a botanical compound found in neem (Azadirachta indica), could be potential candidates for pepper weevil control in organic pepper and eggplant greenhouses. The PMRA should consider azadirachtin during its next Minor Use Pesticides Program (a meeting where growers, government, and manufacturers generate tools and technologies to address the greatest pest control needs).

NATURAL CONTROL
According to the Ontario Ministry of Agriculture, Food and Rural Affairs, the best management practices are as follows:

Turn up the heat: Maintain greenhouse temperatures higher than 27 C for seven to 10 days after removing all plant matter.

Don’t dump where you eat: Leaving pepper debris (and other Solanaceous plants) around your greenhouse or field effectively invites the weevils to bunker in for the winter.

As soon as the over-wintered weevils smell fresh peppers in your greenhouse, they will move back in.

For readers in Ontario, the Ontario Greenhouse Vegetable Growers (OGVG) has declared that all growers must send all greenhouse organic waste (including vines and culls) to the regional landfill. There, the waste can be buried greater than 30 cm deep to avoid any chance of the weevils emerging the following year. Weevils are great flyers, so be sure that the bins you use to transport the waste are covered.

Be a neat freak: Don’t let weeds or any plant debris sit on the ground in or around the greenhouse. Remove fallen peppers every day.

Stay alert: Pheromone traps can be a great early indicator of pepper weevil issues, so they should be hung as soon as the greenhouse is ready for plants. These traps attract females that can be identified and destroyed.

Act now: Have a game plan prepared, and make sure your staff knows it. If anyone spots pepper weevils in the greenhouse, remove all peppers with egg-
laying spots and exit holes [Figures 4 and 5]. Put the peppers in airtight plastic bags and send them to the landfill.

Keep ’em separated: Studies from New Jersey show that imported peppers are the major cause for the massive spread of pepper weevils throughout North America. The highest risk occurs when packing and production facilities are too close to one another.

Rotate: The next crop following an infested pepper crop should not be Solanaceous (pepper, tomato, or eggplant) plant. The weevil can still survive on these crops. The best practice is to rotate to a different genus, such as cucumber.