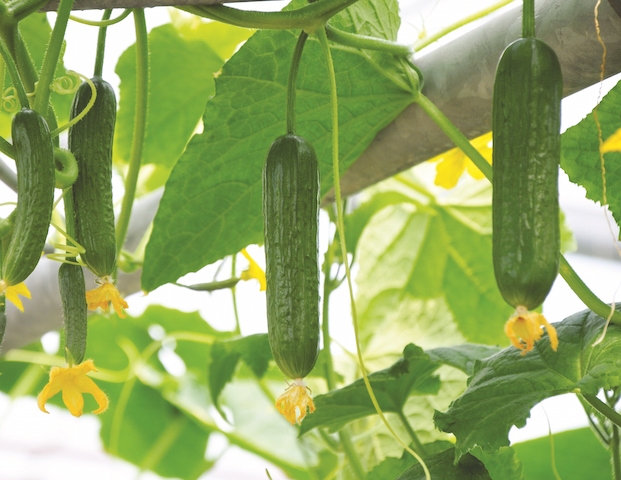 Oct. 10, 2017, Guelph, Ont. – Ontario greenhouse cucumbers are making waves in Asia. Thanks to recent market development ventures in Hong Kong and mainland China, the results are bearing fruit, or cucumbers, to be more specific.

The Asian market is eager to try greenhouse cucumbers and this new-found market is seeing Ontario’s production expand, creating more jobs and a renewed investment into the provincial agri-food industry.

Looking to grow and diversify their markets for greenhouse cucumbers, the Ontario Greenhouse Vegetable Growers (OGVG) identified Asia as a key opportunity.

ONTARIO GROWERS ON TRADE MISSIONS TO THE REGION

Recent economic expansion combined with limited domestic production of cucumbers in Asia sparked the idea for a series of trade missions by Ontario greenhouse growers to explore market opportunities. The market development initiatives took place throughout 2014 and 2015, and the payoffs are just being realized now.

“We are conducting pilot shipments of Ontario greenhouse cucumbers to select Asian markets right now,” says Jacquie Trombley, OGVG’s marketer liaison officer. “The success of these pilot shipments will lead to weekly shipments. Ontario growers are proud of the success of this market development project. The product stood for itself – superior quality and freshness.”

In fact, Ontario growers can deliver fresh cucumbers to Asia within two to three days of picking.

Trombley admits regulations and logistics are the biggest challenges of delivering Ontario greenhouse cucumbers to Asian markets. Another hurdle was getting Asian customers to believe Canadian farmers could grow cucumbers all year round.

It’s understandable: Canada’s climate doesn’t permit cucumbers to grow outside in the winter, but in greenhouses, Ontario growers are producing some of the freshest and tastiest vegetables available worldwide.

The market development groundwork began in 2014 when a group of Ontario representatives traveled to Asia to attend a fruit and vegetable industry trade show. They met product buyers, determined market potential and identified challenges of exporting cucumbers to Asia.

“Very few countries have access selling vegetables to Chinese markets. We learned Canadian cucumbers were grandfathered into their market system, providing us the opportunity to export,” says Trombley.

“Ontario cucumbers look different from what Asian consumers are used to because we grow different varieties. We considered that challenge and hosted our own tradeshow to demonstrate our products,” says Trombley.

The group also provided educational information and technical support at the event as part of their market development support.

The initial market development projects in 2014 and 2015 were funded in part through Growing Forward 2. The project was the first significant step toward expanding Ontario greenhouse vegetable exports overseas. OGVG is building on that success to expand marketing and sales in other Asian markets.

“The Asian market is a key element in the future growth of Ontario’s greenhouse vegetable sector. We are just realizing the benefits of our hard work and look forward to new business relationships, export shipments and growing more Ontario greenhouse cucumbers,” says Trombley.