April 24, 2009, Leamington, Ont. – Kristen Callow is stepping down the
end of this month as general manager of the Ontario Greenhouse Vegetable
Growers association. 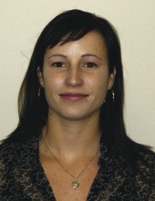 April 24, 2009, Leamington, Ont. – Kristen Callow is stepping down the end of this month as general manager of the Ontario Greenhouse Vegetable Growers association.

In early May, she will become the Weed Management Program Lead – Horticulture within the Agriculture Development Branch of the Ontario Ministry of Agriculture, Food and Rural Affairs. She will work out of OMAFRA’s Ridgetown offices.

OGVG chairperson Len Roozen praised Callow’s leadership and dedication, noting that she has worked "tirelessly to advance the interests of Ontario’s greenhouse growers. Kristen has been the eyes, ears and voice of the organization for over four years."

Under her stewardship, said Roozen, the OGVG has implemented many important new initiatives to foster the growth of the sector, "including, but certainly not limited to, a ground-breaking food safety program and maximizing the effectiveness of our research programs.”

Roozen said Callow “is highly regarded across the sector, the province and the country for her work,” adding that the OGVG membership, the board and her staff "will all miss her enthusiasm and support.”

Callow has a master’s degree in weed science from the University of Manitoba and has more than 12 years experience in the agriculture industry. Before working with the OGVG, she served as a vegetable crop specialist with OMAFRA, leading the development, coordination and implementation of various programs related to vegetables in Ontario. She is a past recipient of the Deputy Minister's Award.

She previously spent several years in the private sector with Dow AgroSciences, coordinating and implementing its research trials in support of new product registrations.

Callow said the Ontario greenhouse vegetable industry has a lot of challenges, but is continuing to show some growth, though not at the pace of a few years ago. It’s mainly medium-sized operations getting larger to gain economies of scale, she noted. The biggest challenge is the increasing competition from low-cost producing areas, such as Mexico.

The OGVG and colleagues in other regions recently formed a subcommittee within the Canadian Horticulture Council. “There are a lot of positive things happening, but it will mean working more closely together to overcome some of the major issues,” said Callow. “Our hope is we can attract more attention federally. Our industry has such a huge economic impact throughout Canada.”

Related
FROM THE EDITOR: August 2007
AgCanada grant to BC veg sector
The Champagne Cocktail Tomato wins ‘Best Overall’
Tomatoes: the shape of things to come?