Why transpiration and humidity can impact a crop’s nutrient intake. 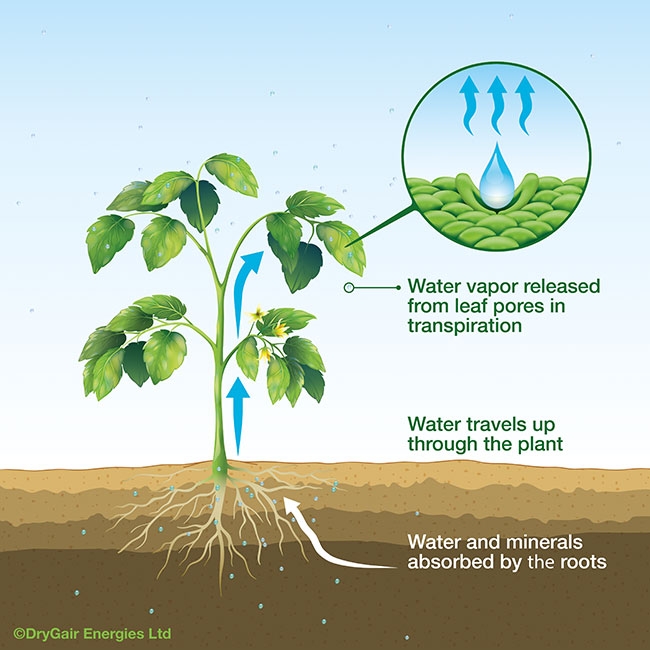 As water is removed from the leaves via transpiration, the flow pulls water up through the plant, carrying nutrients along with it.

Plants are living, breathing and producing organisms. Just like any other living creature, they require nutrients with which they maintain their physiological processes and continue to develop.

These crucial compounds are transported around the plant through complex piping systems. Understanding the factors that affect these systems can enhance the well-being of a crop, producing larger, higher quality yields.

In nature, the plant’s equivalent of food is found in the ground with the most basic building blocks being nitrogen, phosphorous, potassium, calcium, sulphur, magnesium, oxygen, hydrogen and carbon. These compounds are taken in along with the water absorbed by the roots, with the exception of carbon, which is absorbed by leaves as carbon dioxide in the air, as part of the plant’s respiratory system.

Nutrients are transported by water moving through the plant, from root to leaf, bringing them to the plant cells in which they are needed. The hollow tubes transporting the nutrient-rich water are called “xylem”, a type of vascular tissue.

Upward Flow Through the Xylem
Water molecules are connected by a bond known as a “hydrogen bond”. This type of bond strongly connects the separate water molecules into one body of water. The resulting cohesion means that once water starts to flow, the rest follows, even when seemingly defying gravity.

In order to initiate the flow of water through the xylem, there needs to be an initial force. This is called the “xylem pull”. When water evaporates from the leaves, it causes the rest of the water to be pulled through the xylem. If evaporation were to stop, the pull would stop, nutrients would cease to arrive at their destinations and the plant would no longer be able to continue development.

Therefore, evaporation from the leaves is a key part of plant development. Transpiration is made possible through two forces. The first, being the sun, or an alternative light source, causes the stomata found on the leaves to open up, thus allowing water to evaporate. The second force is what determines the transfer rate of water to the air – the relative humidity of the air surrounding the leaf.

What is “Relative Humidity”?
Relative humidity is a measurement of saturation with regards to water vapour in the air. When relative humidity reaches 100 per cent, the air is completely filled with all the water molecules it is able to hold. This is a basic physical property of air, and not one which is lost on growers, most of whom are well aware of the effects of humidity on their crops.

Due to the constant transpiration performed by plants, the air immediately surrounding a plant is very humid. This is known as the “boundary layer”. In a greenhouse setting, where there are many plants in an enclosed space, the boundary layers overlap, and without proper management, relative humidity may quickly reach 100 per cent.

When the air reaches complete saturation, it cannot contain any more water molecules, which means water no longer evaporates from the plant’s stomata and the xylem pull is broken. When water ceases to flow upwards through the plant, the nutrients cease to arrive where they are needed as well. If this situation lasts long enough, the plant may die. But even if the relative humidity level is later reduced, plants are affected by the lapse, eventually leading to a smaller, lower quality product. This is especially true when it comes to fruits and vegetables, which require larger amounts of nutrients to properly develop.

With all things taken into consideration, it appears that humidity in the growing space is a serious factor affecting the well-being of the plant and the quality of the product.

Treating Humidity on a Large Scale
There are two fundamental methods for lowering relative humidity. The first approach is to deal with humidity through heating. As warmer air has the capacity to contain larger quantities of water molecules, heating the air effectively lowers the relative humidity, the air’s saturation level. But heating the air does not actually remove water, it only raises the threshold known as the “dew point”. Saturation will inevitably be reached. Another flaw in this method is that heating may also take a toll on the plants themselves, which require a specific optimum range of temperatures in order to develop properly.

The second approach involves the actual removal of water. The traditional method of humidity reduction is based on a combination of heating and ventilation. On one hand, ventilation reduces the overall water vapour found in the space, while heating increases the air’s vapour capacity. This method is relatively inefficient, and not always effective. Maintaining an optimal temperature is crucial for the plants regardless of humidity, and there isn’t always room to adjust in order to deal with humidity as well. Additionally, when air is heated, energy is invested into it, and throwing it out due to excess moisture can be extremely wasteful.

Modern agriculture is more conscious of efficiency, especially when it leads to higher quality outputs, while reducing costs. Along with a better understanding of the greenhouse ecosystem, a new generation of humidity reduction technologies have taken the forefront. Dehumidifying systems can actively remove water vapour from the growing space, thus reducing the relative humidity and stimulating nutrient transport in the plants, without resorting to heat.

Designing a greenhouse system in which temperature and humidity are dealt with separately, also gives growers much greater control over the climate in their facility. Allowing for optimal humidity levels to be achieved alongside comfortable temperatures, without compromise, helps ensure plant health and optimal development.

As water is removed from the leaves via transpiration, the flow pulls water up through the plant, carrying nutrients along with it.

Rom Meir is the content writer for DryGair, a company specializing in dehumidification technology for greenhouses, drygair.com.