Although many growers have successfully transitioned from chemical to biological control, greater access to resources and tools can improve efficiency and cost-effectiveness. 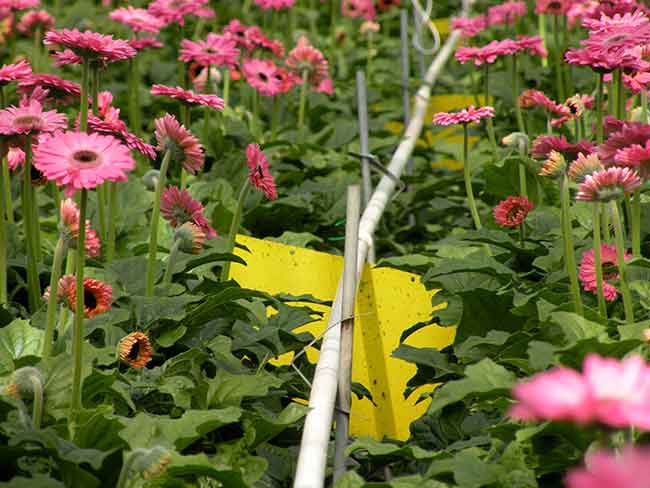 A broad cross-section of greenhouses across the province were surveyed.

Sept. 2015 – In the spring of 2014, we took a snapshot of the status of biocontrol use in Ontario greenhouses and the pest management challenges facing growers.

An online version was first sent out to growers and was followed up a month later with a phone call. We received 97 responses from ornamental growers in 18 regional municipalities, representing 22 per cent of the total ornamental acreage in Ontario, and 22 responses from vegetable growers in nine regional municipalities, representing 33 per cent of total vegetable greenhouse acreage in Ontario.

Biocontrol Use: The majority of growers surveyed (69 per cent) use some form of biocontrol. Three quarters of these used biocontrol agents (BCAs) regularly, while the remainder used BCAs only at certain times, typically at the start of production.

Biocontrol Use – Pests vs. Diseases: All biocontrol users were using BCAs for insect and mite pests, whereas less than half used them for disease control.

Biggest Disease Challenge: Many growers did not consider diseases to be a major issue; 37 per cent of respondents stated that they did not experience any notable disease problems due to implementation of effective prevention strategies.

VEGETABLE GROWERS
Tomatoes, cucumbers and peppers are the major crops grown in Ontario greenhouses; nearly all of those interviewed grew one or more of these crops. Greenhouse size ranged from less than 10 acres to 150 acres.

Biocontrol Use: All surveyed vegetable growers used BCAs in their greenhouses. The majority either used biocontrol exclusively, or used pesticides only when necessary. The rest integrated the use of biocontrols with chemical pesticides.

Biocontrol Use – Pests vs. Diseases: All growers used BCAs to manage insect and mite pests; less than half used biocontrol to manage diseases.

Biocontrol Agents Used: Again, predatory mites were the most common BCAs used, followed by parasitoids. None of the respondents used fungal biopesticides.

Biggest Pest Challenge: Thrips, spider mites, aphids and whitefly were again considered the greatest challenge to control. Thrips were the most common problem faced by cucumber and pepper growers, whereas whitefly topped the list for tomato growers. Several growers commented that thrips were a relatively new problem and that spider mites have become more difficult to manage.

Biggest Disease Challenge: Powdery mildew was the biggest challenge for tomato and pepper growers, accounting for 30 per cent of all responses.

A broad cross-section of greenhouses across the province were surveyed.

CONCLUSION
Use of BCAs by vegetable and ornamental growers has increased substantially over the last decade. All vegetable growers surveyed are now using biocontrol, whereas in 2001 over 90 per cent of tomato and pepper growers and only 50 per cent of cucumber growers used this strategy. Biocontrol use among ornamental growers has more than doubled in the same period, increasing from 26 per cent to 69 per cent.

Thrips remain the driving force behind biocontrol use, particularly for ornamental growers. They are a pervasive threat and growers have to be proactive to stay ahead. With resistance a constant issue, and increased incidence in new crops, research to define more effective use practices for BCAs and their integration into IPM strategies is crucial to allow growers to keep pace with this ever-evolving pest.

SURVEY FINDS SOME GROWERS NOT CONFIDENT IN BIOCONTROL EFFICACY
A common reason given for not using biocontrol was a perceived lack of efficacy. This may be largely due to inexperience on how to effectively implement biocontrol in an IPM strategy. Biocontrol cannot be used the same way as chemical pesticides, requiring a preventative versus reactive approach to achieve success.

Although many growers have successfully transitioned from chemical to biological control, greater access to resources and tools can improve efficiency and cost-effectiveness.

Ornamental production in Ontario is diverse, and some of the current biocontrol practices are not always ideally suited for all production methods. With targeted research to optimize biocontrol and develop solutions for the unique challenges faced by Canadian greenhouse growers, combined with improved access to new educational resources, the future for biological control in Canada looks bright.

AUTHOR’S NOTE
Our sincere thanks to the 97 ornamental growers and 22 vegetable growers who generously took time out of their busy days to respond to the survey.

Your responses will ensure that our future research delivers the tools that you need to succeed!

The authors are researchers at the Vineland Research and Innovation Centre.

Related
Inside View: February 2008
New age biologicals
Pirate Bug tag-team is double-trouble for thrips
Why bees are such super pollinators