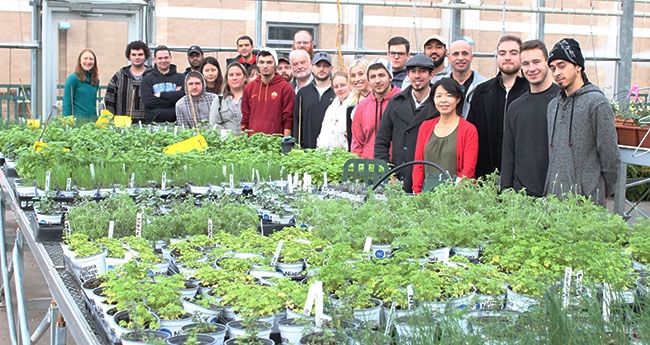 Dec. 11, 2017, Niagara-on-the-Lake, Ont. – Students in the Niagara College horticultural technician program have been demonstrating innovation and enthusiasm for the greenhouse industry by producing alternative greenhouse crops on campus.

In a course-based research project during the fall 2016 semester, students evaluated culinary potted herbs grown in a new organic growing substrate, and a conventional peat-perlite substrate.

During the Greenhouse Production Science course, students grew crops including sweet basil, Spanish Eyes lavender, parsley, sage and chives in 10 cm-diameter pots at the Niagara-on-the-Lake Campus greenhouse. Many students had no previous experience growing plants in a greenhouse, and were intrigued with growing culinary potted herb plants in organic and conventional substrates.

As a control, a conventional water-soluble fertilizer at 200 ppm N was used for the plants grown in the conventional substrate. Students evaluated pH and electrical conductivity (EC) three times during the semester and alternated fertilization with application of tap water, to ensure appropriate pH and EC levels. After 10-12 weeks of growth, shoot dry weight was measured for five representative organic- and conventionally grown plants per crop.

Throughout the ten-week production period, organic plants were taller (seven to 23 cm) than conventional (four to 14 cm) plants, and the average growing substrate EC for the organic substrate was slightly higher (1.9 mS/cm) than for the conventional substrate (1.3 mS/cm).

At the end of the production period, the organic plants had green foliage with no nutrient deficiency or toxicity symptoms visible.

Shoot dry weight was greater for plants in the organic substrate (2.5 g) compared to the conventional substrate
(1.7 g), which may have occurred due to the higher irrigation (fertigation and tap water) use by plants in the organic substrate. For the 75 plants grown under each production system, students applied an average of twice the irrigation volume to organic plants (2L per pot per week) than the conventional plants (1L per pot per week).

Students commented that the conventional substrate held water longer than the organic substrate under the same environmental conditions.

Despite this early flowering, students considered the organic plants more attractive than conventional plants due to a more compact habit and a canopy with greater leaf density. However, some yellow leaves were observed on organic plants, indicating nutrient deficiencies. At the end of the production period, a greater average above-ground dry weight was measured for Spanish Eyes lavender plants grown in the organic substrate (1.94 g), compared to the conventional substrate (0.88 g).

IN SUMMARY
Further research with organic herb production is needed to understand the influence of specific nutrients (e.g., ammonium and nitrate nitrogen) on crop growth patterns and flavour, as well as to develop crop-specific best practices for organic production.

From this course-based research project, students gained experience with greenhouse crop production practices, and learned the value of consistent monitoring to produce a quality crop. In addition, students learned that as demand increases for greenhouse-grown organic culinary potted herbs, understanding the relationship between growing substrate properties and production practices will assist with crop scheduling and healthy plant growth.

These lessons will serve the Niagara College students well as they begin their horticulture careers.

Niagara College will launch a graduate certificate program in commercial cannabis production in 2018. The school is responding to a need for skilled graduates who are knowledgeable in the complex regulations and requirements of an emerging industry.

The program will prepare graduates to work in the licensed production of cannabis, which is used as a therapeutic drug (marijuana), fibre (hemp) and as a source for seed oil (hempseed).

The program is a one-year post-grad program open to students with a diploma or degree from an accredited college or university in agribusiness, agricultural sciences, environmental science/resource studies, horticulture or natural sciences, or an acceptable combination of education and experience.

The program will be located at the Niagara-on-the-Lake campus, which is home to the College’s other agri-business programs, facilities and research projects.

The initial intake for the program is scheduled for Fall 2018. For further program and application information visit www.niagaracollege.ca/ccp.

Mary Jane Clark is a horticulture professor at Niagara College.