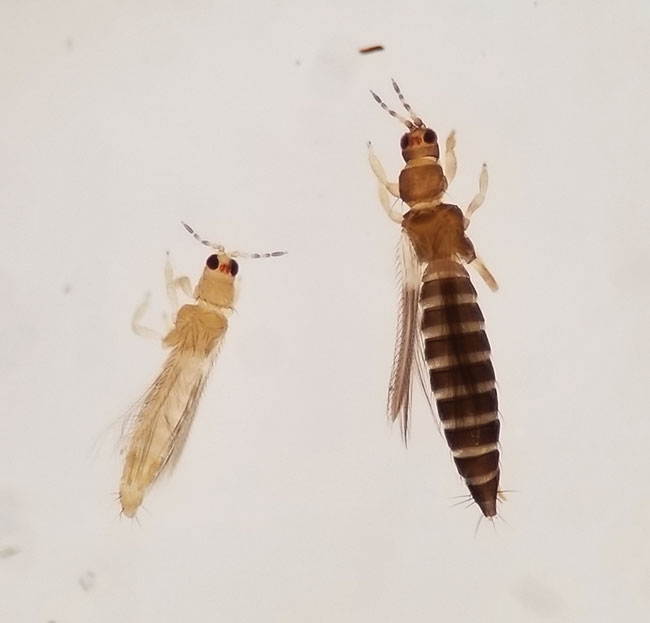 Female T. parvispinus is generally dark coloured (though the head and thorax can be lighter than the abdomen), has bright red ocelli and clear patches at the top of its wings. Male T. parvispinus are yellow, and more closely resemble more common thrips such as onion thrips (T. tabaci). Both males and females are small (females: up to 1mm long)  relative to western flower thrips (up to 2mm). Photo by A. Summerfield.

Increases in global trade, along with decreased use of harsher broad-spectrum pesticides makes it easier for insect species to move around the world. Because of this, it is becoming more common to find usual pests coming in on plant material. This is exactly what happened at two greenhouses this year that discovered they had the tropical thrips species Thrips parvispinus in their crop after spotting unusual damage.

Whenever a new species pops up, it’s important to stay informed and know what to do if it should make an appearance in your greenhouse.

The New Detection
Two isolated incidences of T. parvispinus were intercepted on crops in Niagara and Leamington in the fall of 2021 and the spring of 2022. As this species has been previously detected in Florida and countries in Africa, it is likely that this species came in on imported plant material.

Identifications were confirmed by taxonomists at the Canadian National Collection of Insects, Arachnids and Nematodes (CNC) at Agriculture and Agri-Food Canada (AAFC) in Ottawa, using DNA barcoding. This level of careful identification is necessary for first finds of any new species in a country or region to prevent misidentification.

The Canadian Food Inspection Agency (CFIA) then was notified by CNC-AAFC of the new record; this is required under Canadian regulations so early mitigation and eradication efforts can be taken for new pests to protect the industry, if necessary.

After notification, CFIA determined it was not necessary to take action at this time. This is similar to the first interception of chili thrips (Scirtothrips dorsalis) in Canada in 2018, where CFIA was satisfied as long as appropriate eradication efforts were taken. Thrips parvispinus is also generally considered to be a low pest threat and was taken off the European and Mediterranean Plant Protection Organization (EPPO)’s Alert List in 2001. 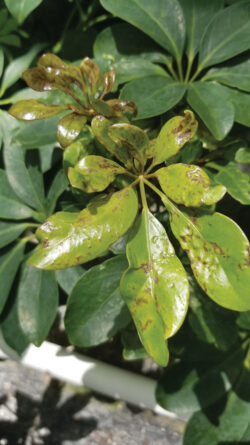 Host plants: Like most thrips, this species can feed on a wide range of host plants. New invasions in Europe and North America have generally been intercepted on tropical plants, such as Mandevilla, Dipladenia, Gardenia, Anthurium, Hoya, Orchids, Ficus, Gerbera and Schefflera. In its native range in Indonesia and Thailand, it is also a pest of many vegetable and fruit crops including peppers (especially chilli), tobacco, eggplant, and strawberry. Therefore, these crops should also be scouted for unusual thrips species or thrips-like damage, especially if grown in the same greenhouse, propagation facility, or garden centre as tropical plants.

Damage: Thrips parvipsinus leaves feeding scars on foliage and sometimes fruit. However, this damage can appear much darker than the usual “silvering” we are used to with western flower thrips. Along with heavy deformation of new growth, they cause extensive brown scarring on foliage of tropical plants. Their damage may be mistaken for extreme broad mite damage. Feeding seems concentrated on new growth.

Risk of establishing in Canada: As a tropical species, it cannot survive winters outdoors in Canada, but could become resident within greenhouses if eradication measures are not taken.

What To Do if You Suspect T. parvispinus Is on Your Farm:
Remember – if you hear hoofbeats, don’t assume it’s zebras! If you see a dark coloured thrips in your crop, it’s most likely you actually have a thrips species that is already common in Ontario (see Figure 3).

To help you determine if you do have a zebra in your greenhouse, the newest edition of OMAFRA/VRIC’s Thrips Identification Key for Growers now includes this species (you can find this key on the ONFloriculture.com blog). If you’ve gone through this key and think you might have T. parvispinus, have the identification confirmed by an OMAFRA specialist, or send them directly to the CNC lab in Ottawa. Unfortunately, T. parvispinus looks very similar to a species called Japanese flower thrips (T. setosus). These two species can only be properly distinguished using a compound microscope at 400x magnification, and most consultants won’t have access to this.

After confirming the identification, work with an OMAFRA specialist or IPM consultant to determine the appropriate course of action to control this pest.

Control Options for T. Parvispinus
Biosecurity measures are designed to prevent, minimize and control the introduction and spread of plant pests at the farm level. (For more information on developing a biosecurity plan, check out the Floriculture Sector Biosecurity Guide on CFIA’s website). Scouting your incoming plant material for pests is a key part of practising biosecurity, and is especially important for plant material coming from parts of the U.S. (e.g. Florida) and other countries where T. parvispinus has already been detected.

Growers may also want to consider implementing dipping programs for tropical cuttings in soaps, oils or BotaniGard, similar to chrysanthemum/poinsettia cuttings, to lower the risk of bringing in tropical thrips species. However, different plant species and varieties should first be tested for phytotoxicity before full-scale dipping procedures are implemented.

If you find T. parvispinus on your farm, there are some control strategies you can implement. However, little research on this species has been published, so it’s important to know that best management practices to control T. parvispinus are still being developed. OMAFRA is currently gathering information from other countries, and we are hoping to speak with growers who may have encountered this pest to gather more information on what works best.

As we’ve learned with onion thrips (Thrips tabaci) and Echinothrips, the biocontrol strategies that work for western flower thrips may not be as effective on other thrips. Anecdotally, however, T. parvispinus populations seem to be suppressed in tropical plants with high rates of predatory mites (think Cucumeris and/or the new Canadian predator, Anystis), but this needs further testing to determine the level of control. Anecdotal reports from pepper crops also suggest that a combination of predatory mites and Orius provide good control.

Other options for cooler-grown crops (such as tropical plants grown over the winter months) could be the predatory bug Dicyphus and the predatory mite Limonicus, both of which operate better at lower temperatures than other natural enemies. 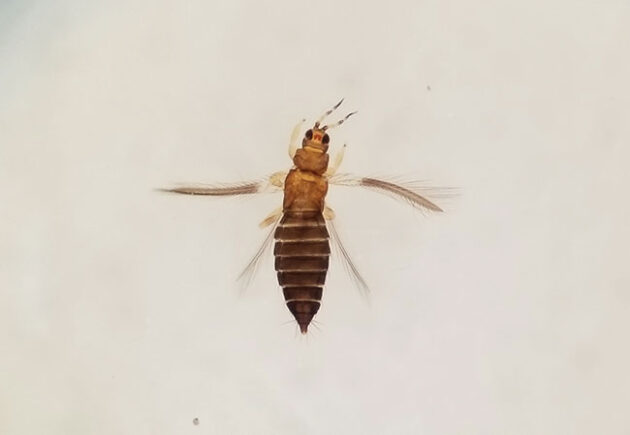 Eradication with pesticides should be attempted before shipping plants to the U.S.

On the pesticide front, one laboratory study indicated that T. parvispinus are susceptible to Success (Spinosad), but not to the neonicitinoid Tristar (acetamiprid). This study has been confirmed in the field – the operation with the first incidence of T. parvispinus was able to get on top of the issue with several drenches of Success before shipping.

Drenching Success, rather than spraying it, can be less harsh on your predatory mite population, allowing them to work in concert.  You may want to consider tank-mixing Success with another pesticides that suppresses thrips feeding (to help stop damage ASAP), such as Beleaf or Ference. Both of these pesticides are also soft on predatory mites, but are unlikely to fully control thrips populations on their own.

Other pesticides that generally show good efficacy for thrips other than western flower thrips include Pylon, Avid, Kontos and Orthene. However, these pesticides are notoriously hard on biocontrol agents, and have moderate-to-long (3 to 12 week) residual times. Because of this, they should be applied in a separate area to prevent long-term effects on biocontrol in the growing compartment, or only on crops where biocontrol is not regularly used.

Because this species is on the USDA-APHIS “Pests of Concern” list, eradication with pesticides should always be attempted before shipping plants to the U.S. Scouting should be done before and after applications to make sure pesticides were effective.

If you think you might have T. parvispinus on your farm, please contact Sarah Jandricic at sarah.jandricic@ontario.ca.

Sarah Jandricic is the Greenhouse Floriculture IPM Specialist for OMAFRA. Ashley Summerfield is the Senior Research Technician in the Biocontrol Lab at the Vineland Research and Innovation Centre, and recently completed her M.Sc. from the University of Guelph on the biocontrol of onion thrips.