Perennial breeding isn’t just about appealing to the consumer anymore, but the greenhouse grower as well. 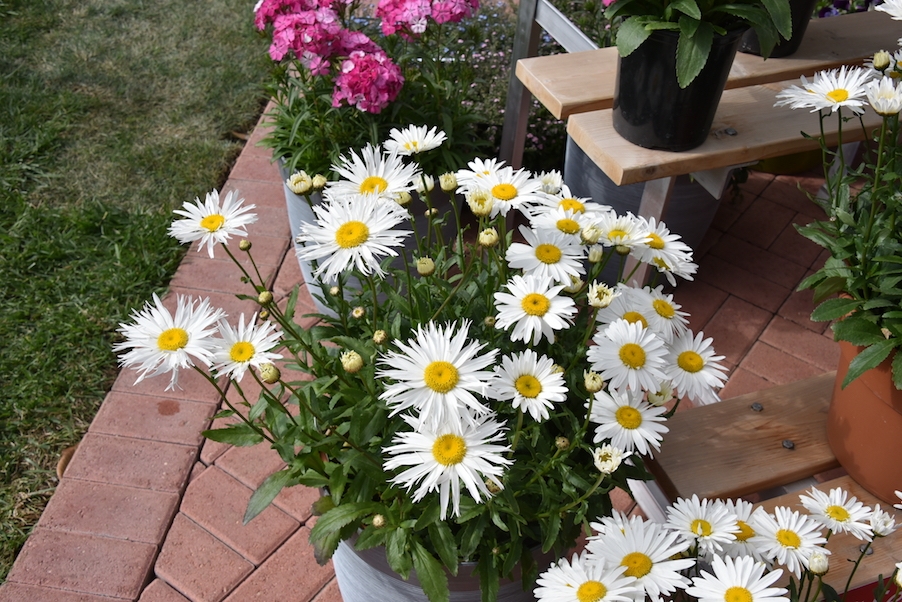 At the California Spring Trials earlier this year, several new perennial varieties leapt out at me. In particular, I looked for varieties with unusual or extended bloom periods to lengthen their life on the greenhouse bench.

Some didn’t require vernalization, while others had a photoperiod/daylength-neutral response that didn’t need short or long days to encourage new blooms. And of course, I paid particular attention to those hardy to USDA Zone 5. Here were my top 10.

1. Leucanthemum Betsy
Betsy is a new vegetatively propagated leucanthemum. It should generate blooms constantly throughout the growing season as a result of it being daylength neutral. The flower is large, ranging from five to eight inches in diameter. The mature plant height can be approximately 20 inches. Hardy to USDA Zone 4. GreenFuse Botanicals.

2. Leucanthemum Madonna
Madonna Shasta daisies will bloom from seed in the first year without a vernalization treatment. The plants produced from Madonna seed are expected to be very uniform in habit, but in any given seed lot, a small percentage of plants may produce petals with lacey edges. This cultivar is reported to show resistance to bacterial infection. Hardy to USDA Zone 3. Kieft Seed.

4. Veronica Moody Blues Dark Pink
Veronica hybrida ‘Balmoodink’ Moody Blues Dark Pink is a new colour for this series of compact spiked speedwell. It can reach heights of 14 inches in the garden. No vernalization is required to initiate bloom, so it will flower in its first year and continuously produce blooms in a cyclical pattern throughout the growing season until frost. Hardy to USDA Zone 4b. Darwin Perennials.

5. Achillea Firefly
The Achillea Firefly series of yarrow currently has four colours: amethyst, diamond (white), peach and sunshine (yellow). It has a relatively tall, but sturdy, growth habit that ranges from 18 to 36 inches depending upon colour. It will bloom most of the summer. Hardy to USDA Zone 3. Proven Winners.

6. Allium Serendipity
Allium ‘Serendipity’ is an ornamental onion that can reach heights of 20 inches when in bloom. It has purple flowers, blue-green foliage and a compact habit producing a tufted ornamental grass texture that is attractive even when not in bloom. Hardy to USDA Zone 4. Proven Winners.

8. Phlox Flame Pro
This is a subseries of the popular Flame series of phlox. The grower currently has five colours to work with and can expect them to be very well-matched in plant habit, flowering requirements and timing. This series will bloom two weeks earlier than Flame and will have an extremely long bloom window. Hardy to USDA Zone 3. Dümmen Orange.

9. Aubrieta Rock On
This series of rock cress is marketed under the Fleur De Rock banner along with other rock garden genera such as Delosperma, Iberis and Saxifraga. The Rock On series is available in blue and pink colours. This compact, evergreen alpine will bloom early in the spring but have an extended bloom period. It is hardy to USDA Zone 4. Dümmen Orange.

10. Iberis Snowdrift
This compact candytuft cultivar is unique in having a late flowering time, blooming as much as four weeks later than other commercially available early cultivars of Iberis sempervirens. This characteristic makes it useful for extending the candytuft season for garden centre benches. Hardy to USDA Zone 4. ThinkPlants.

Acknowledgements: Thank you to Greenhouse Canada magazine and Ball Horticultural company for their financial and logistical support on this trip. Travelling by bus with Ball Hort, we were hosted by a number of breeders who shared much information with us. For more coverage of CAST 2019, check out new edibles as well as new disease-resistant and environmentally resilient plants.

Rodger Tschanz is manager of the Guelph Garden Trials at the University of Guelph. He can be reached at rtschanz@uoguelph.ca.