Outside of their ability to eat prey, scientists are now realizing that the mere presence of predators or parasitoids can affect pests in a strong way. 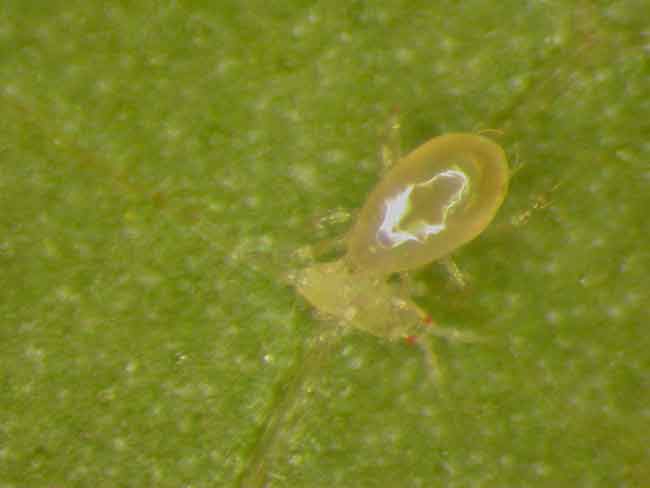 Sept. 2015 – This feature will look at new insights into how biological control really works, and where they can take us.

I can hear your thoughts now – “what do you mean how biological control really works? I know how it works.”

Well, I thought I did too.

The theory and practise of biological control is essentially built on consumption. We release predators we know will kill and eat our target prey. Or, we release parasitoids that lay their eggs inside certain pests, consuming their host as they develop. And, if we release enough of the right kind of predator or parasitoid, they will eat enough to suppress or control pests in the greenhouse.

In actuality, this is a simplified version of the story. The real version is more complex, but far more interesting.

Outside of their ability to eat prey, scientists are now realizing that the mere presence of predators or parasitoids can affect pests in a strong way.

Failed attacks from predators, their hunting behaviours, or even their chemical cues can leave prey feeling constantly “intimidated” or “harassed.” This can negatively impact pests by causing them to eat less, or eat lower quality food, in order to stay out of a predator’s way. Or, it can cause them to lay eggs in less favourable locations as a way to protect their young. It can even stunt the development of insect pests, or make them more susceptible to sickness (from entomopathogenic fungi, for example).

NON-CONSUMPTIVE EFFECTS OF PREDATORS ON PREY
This ability of predators to negatively affect prey without eating them has been termed “non-consumptive” effects.

Ecologists now think that these non-consumptive effects are just as important – or maybe even more important – than consumption in terms of regulating prey populations in nature. Judging from recent research on the subject, this may also be true when it comes to controlling pests in greenhouses using commercially released natural enemies.

MITES “SCARE” THRIPS INTO EATING LESS
One of the best examples is with predatory mites and western flower thrips. Neoseiulus cucumeris and Amblyseius swirskii kill and eat the small, first larval stage of thrips (referred to as L1s). However, the larger, second-instar thips (L2s) are simply too large for the mites to kill.

But, that doesn’t mean mites don’t help control them.

Research by myself and the Frank Lab at North Carolina State University has shown that though N. cucumeris is rarely successful in killing an L2 thrips, they will nonetheless repeatedly attack them – up to 40 times an hour.

The L2 thrips fend off these attacks by either running away, or “slapping” mites in the face with their abdomens (see http://www.youtube.com/watch?v=kQBhQKCyagA). But, this defensive behaviour costs the thrips. Because L2s spend more time fending off attacks, they spend almost 30 per cent less time feeding. In the end, the presence of mites reduced L2 thrips survival by 54-78 per cent, probably because eating less meant these thrips lacked proper nutritional reserves.

As an added bonus, all this interruption of thrips feeding by mites also reduced plant damage by 40 per cent in our tests.

Ongoing research at Cornell University shows that the presence of A. swirskii reduces the number of eggs produced by an adult thrips (from 120 to a mere 40 over their life time). The presence of mites also reduces adult thrips lifespan (from 20 days to 12-14 days, depending on how long thrips are exposed to mites). And, research from Austria reveals that just the mere presence of predatory mite eggs (eggs!) can also “scare” L1 thrips into eating less, reducing their survival.

You can see that when we add all this up (adult thrips that live for less time, fewer numbers of thrips eggs, fewer surviving L1 and L2 thrips), we get a pretty impressive picture of how mites can ruin a thrips life, without ever needing to take a bite.

“SMELLY” SPIDER MITE PREDATORS REDUCE PEST EGGS
There is also a plethora of information on non-consumptive effects of Phytoseiulus persimilis on spider mites.

As we know, P. persimilis can eat all stages of T. urticae (two-spotted spider mite), even the defenceless eggs. So one strategy T. urticae uses to “defend” its young is simply to hold its eggs inside its body when it senses a predator.

Researchers have demonstrated that, after being exposed to P. persimilis on a leaf for 24 hours, then being transferred to a new, predator-free leaf, spider mites lay 22 per cent fewer eggs. Egg-laying is reduced even though the threat of the predator is gone.

FUTURE DIRECTIONS
It’s true that the above examples are all with biocontrol agents that are generally successful in controlling their target prey (we just may not have fully understood how, until now). But, we might also be able to apply our knowledge of non-consumptive effects to other, more poorly controlled pests.

For example, in a recent blog post (ONFloriculture.wordpress.com), I discussed the difficulty of controlling foxglove aphids with parasitoids. Parasitism rates are often low because foxglove aphid drops off the plant when disturbed.

As it turns out, some creative researchers in B.C. tried to turn this pesky behaviour against the foxglove aphid by combining harassment from parasitoids with sticky bands at the base of plants. If Aphidius ervi failed to parasitize foxglove aphid, and it dropped, the aphid would be trapped and killed by the band instead.

Unfortunately, the sticky bands didn’t really improve control because they also reduced parasitoid numbers. But, it’s a great example of thinking outside of the “consumption box.”

I suggest that maybe it’s time for a bit of a paradigm shift in the industry. If biological control is not entirely predicated on the amount of killing and eating that natural enemies do, but also includes contributions from non-consumptive effects, then we might be able to use existing biocontrol agents in different and creative ways.

So get out into your greenhouse. Make some observations. Try some things. I don’t know about you, but this seems better to me than crossing our fingers and waiting for new biocontrol agents to appear on the market.

Sarah Jandricic is the greenhouse floriculture IPM specialist with the Ontario Ministry of Agriculture, Food and Rural Affairs. • sarah.jandricic@gmail.com