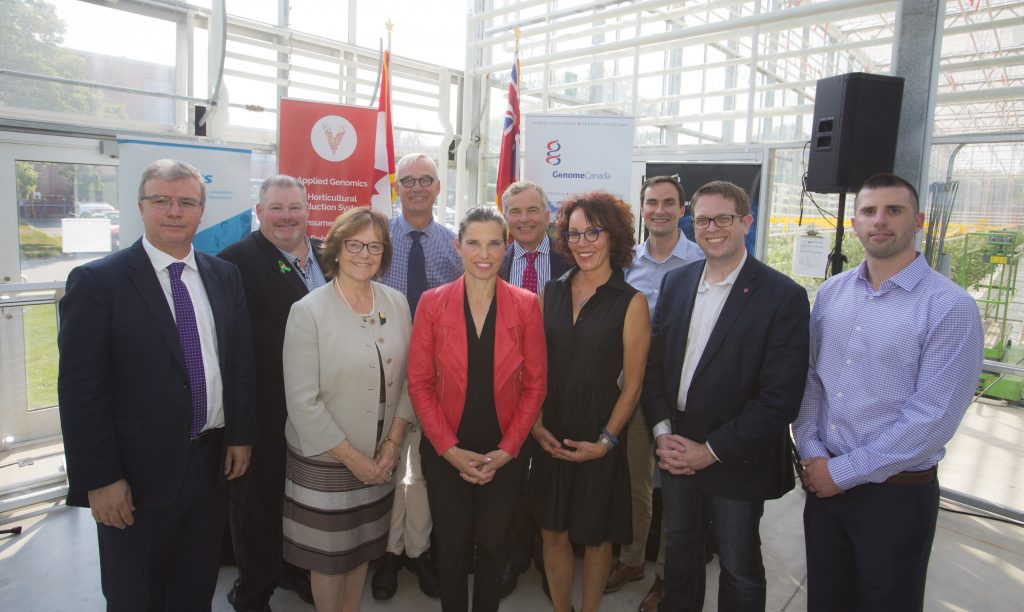 Photo provided by U of T/Ministry of Science and Sport

This month, the Government of Canada announced an investment of over $2 million in genomics research for disease resistance in greenhouse vegetables.

The announcement was made at Vineland Research and Innovation Centre, one of the recipients of this funding. Working with Drs. David Guttman, Darrell Desveaux and Adam Mott from the University of Toronto, the project aims to further the development of research around a family of genes that, when silenced, allow plants to resist multiple bacteria and fungi, protecting greenhouse crops against multiple pathogens.

“The preliminary work has been done exclusively in Arabidopsis,” says Mott. We found that plants in which we have eliminated expression of these proteins are more resistant to both bacterial and oomycete infection in addition to having a more responsive immune system, he explains. So rather than removing the genes from the plant, the expression of those genes is eliminated.

Using random mutagenesis and breeding, the researchers hope to come up with plants that do not express these genes.

The goal is to release new greenhouse vegetable varieties with improved disease resistance within five years of project completion. It’s expected to bring $26 million to the industry and improve Canada’s competitiveness in the sector.

The research project is part of the Genomics Application Partnership Program (GAPP), a program launched in 2013 by the federally-funded, not-for-profit organization Genome Canada. The partnership program seeks to connect researchers with industry to develop new gene-based technologies in health care, agriculture and environmental protection.

“When researchers have the tools and support they need, they are able to work in partnership with industry to develop made-in-Canada solutions that will help drive our economy,” says Kirsty Duncan, Minister of Science and Sport.

With seven new GAPP projects announced, they will receive a total of $21 million – $6.7 million of federal funding and $14.3 million from partners, including provincial governments, industry, and not-for-profit organizations.