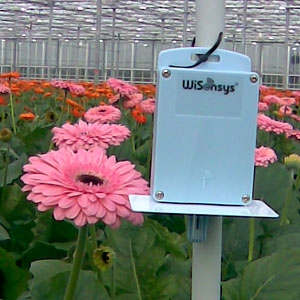 A new sensor net designed to optimize climate control and energy use in greenhouses, is now commercially available (Image from WUR website).

AgriSensys, a new technology able to track temperature and humidity levels in order to optimize the climate throughout a greenhouse and lead to energy savings, is now commercially available from WiSensys.

It was developed in concert with researchers at the Wageningen University and Research Centre (WUR) in The Netherlands.

Wet and cold spots are unwanted in a greenhouse. Horizontal and vertical temperature differences, however, can hardly be avoided as result of greenhouse construction, irradiation, wind, or other natural forces. `Heat drying´ is a common measure to avoid damp spots in the greenhouse. But each degree of extra heating, however, costs up to ten per cent energy.

Accurate information about horizontal and vertical climate differences is required to avoid unnecessary ´heat drying´. In current practice the number of measuring boxes per compartment is usually too low for taking adequate measures. WUR Greenhouse is therefore working on the development of a cheap and practical wireless measuring system. This SmartDust system will much more accurately then has been possible until now collect information about wet and cold spots in the greenhouse. Such a system can lead to energy saving and better crop quality because it gives growers a better tool for reacting to climate differences.

Ten sensors per ha
The wireless measuring system has been tested in practice in the 2008-2009 season. The sensors have been tested in the cultivation of tomato, cucumber, gerbera and Matricaria with a density ranging from 60 to 128 sensors per hectare. The way in which cool-wet spots manifest themselves under different conditions such as day/night, open/closed screen, and seasons has been investigated.
The wireless system was found to perform well and the sensors do under normal conditions serve their purpose. During daytime, however, strong irradiation can still cause inaccuracies and the sensors are less reliable during the night, at air humidities close to 100%. Structural deviations can be detected by averaging the recorded data over a longer period of time – at least one daily period.
The researchers conclude that around ten sensors are required per hectare to make sure that no cold-wet spots are missed. The use of wireless sensors is not only useful for occasional characterisation of the greenhouse but also for permanent monitoring. The obtained information then enables structural modification of the greenhouse or application of specific climate control to homogenise the climate and to achieve further energy savings.

WUR Greenhouse Horticulture is investigating whether cold and warm spots in greenhouses can be identified with wireless RV-T sensors and how such spots are manifesting themselves under different conditions (day/night, season, screens etc.). The study comprised measurements in different seasons with 100 sensors in commercial greenhouses with tomato, cucumber, gerbera and matricaria.

To prevent diseases in the greenhouse growers will usually keep temperatures at the high side to ensure that the wettest and coldest spots in the greenhouse also have an acceptable climate. An uneven distribution of air temperature and humidity may thus lead to a 10% higher energy consumption. Growers are nowadays attempting to homogenise their climate by means of ventilators. Because ventilators are also using energy, it is very important for growers to know whether there are cold spots, where these are, and how effective the ventilators are.

Wireless systems are available and relatively cheap but the suppliers must make the systems more robust and they must be integrated into the climate computer to enable prolonged application in greenhouses. Application of wireless sensors is in any case a good option for incidental characterisation of the greenhouse; renting of a system via a carry-in service seems an obvious solution.

Automatic and on-line control to achieve a more homogeneous climate and a further reduction in energy use is in principle technically no problem. For greenhouse application, however, this is for the time being a bridge too far. This requires further specific research, especially into the possibility of local climate control, e.g. by means of individually controllable ventilators.