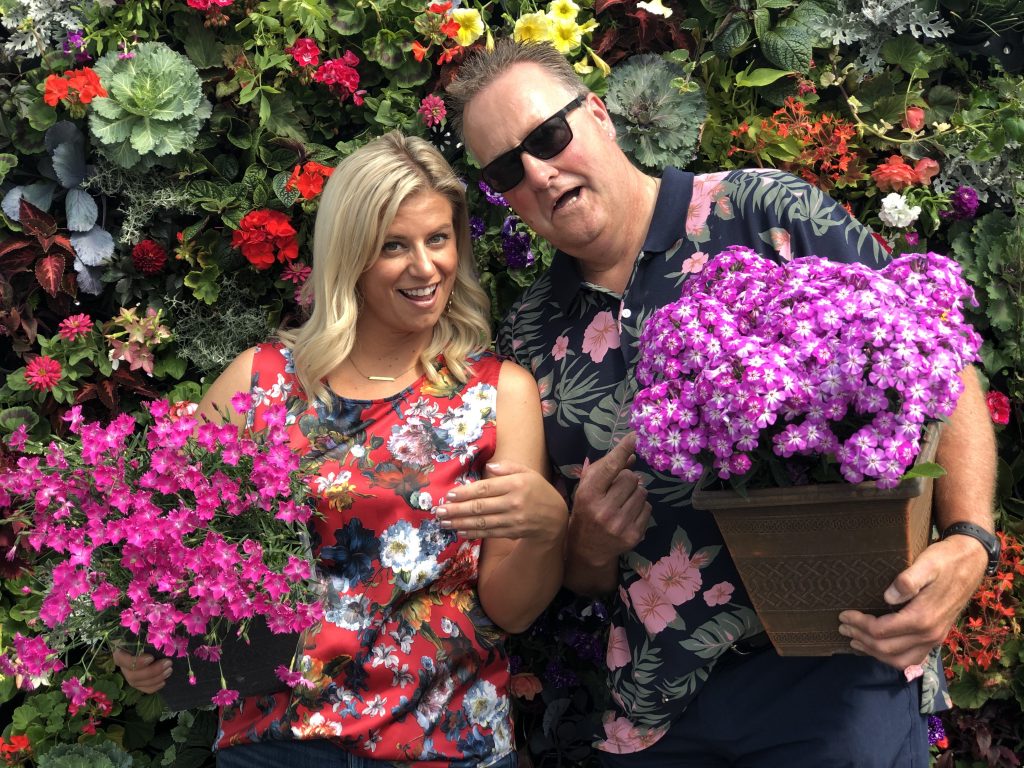 Growers Deb Foisy and Michiel Verheul pose with some of their favourite selections from New Blooms. All photos provided by: D. Foisy and M. Verheul

The New Blooms show in Alberta was held at Deb’s Greenhouse in Sturgeon County from July 17 to 18. The first day saw 65 growers split between morning and afternoon sessions, while the second day catered towards municipalities and garden clubs. As visits were limited to two hours due to COVID restrictions, the event drew fewer attendees compared to previous years, but organizers say the energy and atmosphere were on point.

They were excited to mingle with others in one of the few, or only live gatherings for ornamental growers this year, says Michiel Verheul. The owner and operator of High Q Greenhouses in Sturgeon County, Alta., Verheul is a young plant supplier who cultivated the cuttings for display, Debbie Foisy, owner of Deb’s Greenhouse set up the venue for the event. Growers were able to purchase the displayed plants, as well as place their orders for select varieties with Verheul for the upcoming season.

Differing from previous years, trialled varieties were all sourced from Dümmen Orange North America as selected by Chris Berg. The brainchild behind New Blooms two years ago, Berg was appointed marketing director for Dümmen Orange NA late last year and has since integrated the event into Dümmen’s marketing efforts.

To gauge the popularity of the new varieties among growers, organizers asked attendees to take selfies with their favourites.

The SuperSemp succulent series was one of the most popular, by far. “My jaw dropped when I saw them,” says Foisy. Targeting the unwavering popularity of succulents among consumers, the series boasts a multitude of shapes and colours, with some rosettes reaching eight inches in diameter.

Varieties with fun, creative names such as ‘Petunia Nice Guys’ and ‘Hummingbird’s Lunch Cuphea’ can also capture attention, says Verheul, who adds a few to his catalogue every year.

With Alberta’s lower temperatures, growers tend to lean towards cooler crops such as Petunias, Osteospermum and Calibrachoa. Some of the warmth-loving crops didn’t perform as well. “For instance, New Guinea impatiens don’t bloom profusely early in the season,” Verheul says, and as a result, have few flowers by the time New Blooms takes place in August. “That’s the whole idea of New Blooms. It’s to grow it and show it – the way that it grew and the way that it will grow for you, so you know what choices to make when it comes to offerings for your customers.”

The small compact form of Delosperma Rock was a favourite.

The large, spilling Delosperma Solstice was also a favourite.

Taking the show on the road

Riding on the success of New Blooms in Alberta, Verheul and Foisy packed up their varieties and brought the show to growers in Saskatchewan, creating a second event called the “New Blooms Road Show.”

Of the 100 greenhouses in the province, 50 growers attended the event at Misty Gardens in Humboldt, SK on July 23, split between morning and afternoon sessions.

Paul and Dianne Kneeshaw of Misty Gardens did an excellent job setting up for the event in Humboldt, says Verheul. Verheul was also one of two guest speakers at the event, sharing his experience with various technology employed at his greenhouse. Jackie Bantle, greenhouse horticulture and facility manager at the University of Saskatchewan, spoke on rare perennials suited for the Canadian Prairies.

New Blooms will return to both provinces in 2021 – July 15 for Alberta and July 22 for Saskatchewan.

All images courtesy of  D. Foisy and M. Verheul.