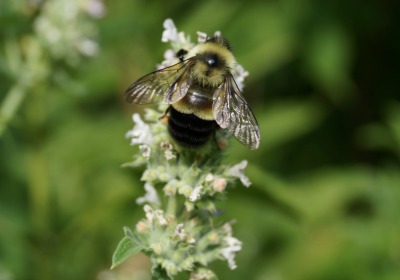 Nov. 26, 2014, Toronto – Ontario Nature, a charitable conservation organization, welcomes Ontario’s plan to achieve an 80 per cent reduction in the use of neonicotinoid pesticides (neonics) by 2017.

The plan responds to growing public concern about the harmful effects of these pesticides, and to the substantial body of evidence implicating neonics in pollinator decline.

Ontario is the first and only province in Canada to propose a dramatic reduction of neonics.

“The 80 per cent reduction target is a bold and necessary step to address the threats that these pesticides pose to human and ecosystem health,” says Dr. Anne Bell, director of conservation and education at Ontario Nature.

Neonics are the most widely used pesticides in the world, and are used extensively on corn and other crops in Ontario. Some types of neonics are considered to be up to 10,000 times more toxic than DDT.

This past summer, an international team of 29 independent scientists reviewed over 800 peer-reviewed scientific studies and concluded that neonics “are a key factor in the decline of bees.”

Ontario Nature, along with partner organizations including the Canadian Association of Physicians for the Environment and the David Suzuki Foundation, has been urging the Ontario government to ban the use of neonics in the province.

“The public interest in seeing neonics eliminated is clear,” says Bell. “Bees and other pollinators are responsible for an estimated one out of three bites of food that people eat. This is worth billions of dollars to the North American economy.

“Pollinators play a critical role in the web of life of which we are a part.”

As far as bees are concerned, that web is unravelling quickly. Half of the bumblebee species in North America are in decline, a trend that holds true in Ontario where several species, once common or widespread, have virtually disappeared in the last 30 years.

“Both the rusty-patched bumblebee and the gypsy cuckoo bumble bee are now listed as endangered, and the American bumble bee is likely to follow soon,” says Bell.