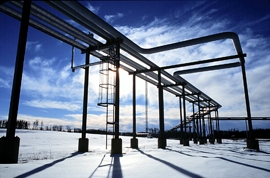 The recent injection of 20 Bcf (billion cubic feet) of natural gas into storage continues to show that the supply/demand ratio is out of balance – often a signal for a price shift, says Michelle Vieira, sales, operations and member relations manager at Guelph, Ontario-based Ag Energy Co-Operative.

“The bulls have been waiting for a more definite market to allow for a rush on prices; however, with over 400 Bcf more than last year in storage, the bulls will have to wait,” she says. “Ag Energy is concerned that this trend has been consistent since the end of winter and may actually produce those higher prices in the fall/winter.”

Vierra says that there are many market factors to consider. “One of those is storage and the comparison between history and current trends. The next three weeks call for injection of only 129 Bcf, compared to much higher injections for last year and the five-year average. The storage deficit is not showing an increase in demand, but rather a reduction in supply to market.” (See charts at bottom.)

“This is not to say we have limited supply, but rather points to the question: who wants to sell gas at less than $2 US/MMBtu when you sold for over $2 US/MMbtu in the not-so-distant past? Producers have been reacting to lower prices by shutting down their rigs. Economics say that reduced supply will increase price, if demand is stable.”

“Drilling results for the week were relatively unchanged for the US; however, Canadian drilling is now down significantly from last year, with oil-drilling down 98 rigs, or 30.9 per cent, and gas-drilling down 67 rigs, or 45.6 per cent. Before spring break-up, Canadian drilling was similar to last year, but did not bounce back as it usually does.”

“In the past, hot weather and hurricanes in the Gulf during the summer often signalled higher prices.   That may still be true; however, we are not seeing those conditions at this time. The temperature forecasts since last week for the remainder of the month have been for cool weather; however, this does not raise the forecast injections to seasonal averages.”