March 9, 2011, Homestead, FL – How is the world’s first blue phalaenopsis orchid made blue?

While the patented technique is closely guarded, Silver Vase CEO Andrew Bartha did reveal a bit about the hottest new plant on the market.

This method has been perfected after many years of research and testing, using naturally derived elements while remaining environmentally conscious. ‘Blue Mystique’ is not hybridized. This special procedure colours flowers from the inside in a lovely spectrum of blue. 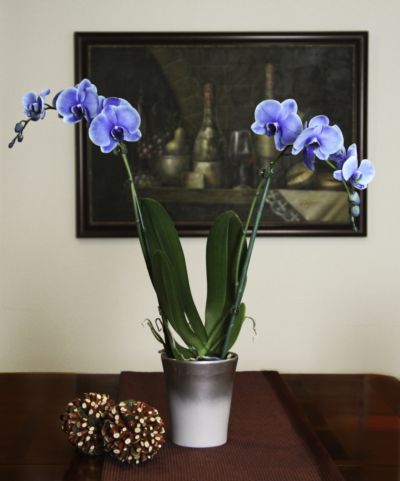 That is the case with buds on the current stem: they will open to beautiful and softly fading light blue flowers. The reason for this is that the buds were closed at the time of treatment.

As the circle of life continues and the healthy orchid grows, a new stem will probably bring white flowers, though it is too early to know for sure.

“Orchid lovers, customers and consumers of all types tell Silver Vase that part of the beauty of ‘Blue Mystique’ is its wide range of blue tones,” said Bartha. “We’ve heard it described as electric, azure, sapphire, royal and the sky, butterflies and even the blue water around Hawaii.”

ABOUT SILVER VASE, INC.
Silver Vase, Inc. brought year-round availability of phalaenopsis orchids to the United States. Founded in 1988, the company is known as one of the most innovative potted plant growers in North America, revolutionizing the industry through many distribution and packaging changes. It’s fully robotized and environmentally friendly greenhouse operation produces more than two million units from nearly one million square feet of climate-controlled facilities.

Silver Vase operates its own distribution network, serving a broad range of customers, and is the largest U.S. partner to Dutch breeder Floricultura.