Old or new, gardeners are choosing varieties for their bold beauty and tasty yields. 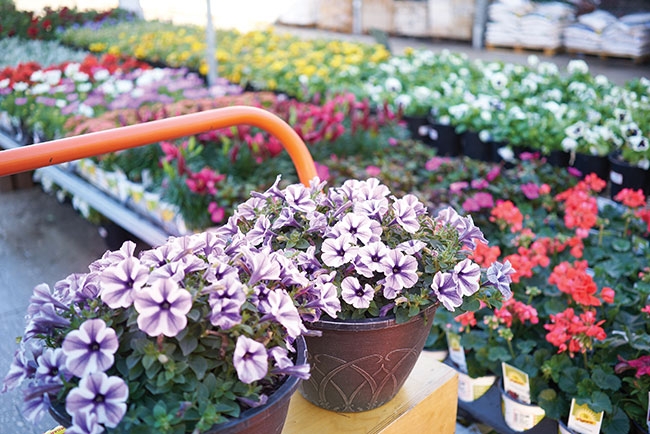 Whether it’s fashion, food products, gardening or other aspects of life, consumer tastes change. To find out what’s hot this year, what will be in demand for the next, and most importantly, how to best sell it, we checked in with some leading experts from coast to coast.

“We’re always focused on bad weather having a huge impact on sales, and it will certainly delay them, but we also have to focus on the bigger picture of changing consumer buying habits,” notes Mark Cullen, the national spokesperson for Home Hardware’s lawn and garden division. “I think peak buying season, as we used to know it, has already become more spread out, and that will continue. The Boomers were taught by their parents that we have to start our garden as soon as possible and stop planting by Father’s Day. But there are a lot of younger customers who, for a variety of reasons, plant a bit later. I think there’s a strong opportunity to service these post-Father’s Day customers.”

Cullen believes there are strong sales opportunities into mid-July if stores make sure to stock good-quality plants in full bloom. Later in the growing season, says Cullen, customers tend to prefer larger plants instead of smaller ones so they can achieve an immediate impact in their gardens.

Brian Minter’s attitude on peak purchasing season is all about preparation. Because spring weather can be uncertain from year to year, the co-owner of Minter Country Garden in Chilliwack, B.C., says both greenhouse growers and retailers need to be prepared to sell more in potentially more limited timeframes. “Changing weather patterns will determine our selling windows,” he says, “so we need to adapt.”

Choice in size and price
The report Lawn & Garden Shopping in the USA, 2019 indicates that American homeowners expect to purchase most of their lawn and garden products from home improvement centres, and nearly six out of ten respondents plan to spend more on their lawn and garden this year than they did last year. Whether it’s the same for Canadians is anyone’s guess, but Minter focuses on size and price as being important consumer purchasing factors.

He notes that while retailers all seem to be shifting to bigger four- and five-inch specialty plants, not everyone can afford the larger items. Many consumers still prefer the smaller packs as they get more plants for the same cost.

It’s a similar scenario with containers and hanging baskets, for which Minter Country Garden is seeing exponential sales growth. “People want to be able to buy them anytime and spruce up their homes when company is about to arrive,” Minter explains. “But we need to provide a range of price points for these, from $30 to $100, and not just expensive showpieces.”

Herbs, vegetables and flowers in bloom
Millennials and urban gardeners are still gardening for both food and environmental reasons, notes Cullen, so the popularity of herbs and pollinator plants, including native varieties, will continue. Many herbs such as sage, rosemary, mint and basil take up very little space and are very productive.

Herb sales at their garden centre are “through the roof,” reports Minter. “Customers want large basil, dill, coriander and other great herbs to add value to their foods,” he says. “Lavender, too, is way out front. It has it all: romance, colour, fragrance, and it’s good for pollinators. We can’t keep it in stock and our major supplier is already sold out.”

At Home Depot Canada, basil is the best-selling herb this year. The chain reports that sales of herbs, vegetables and fruit trees have risen dramatically over the past five years. With 36 varieties sold in Alberta’s Home Depot stores, tomatoes are particularly popular there compared to other provinces.

To boost sales of tomatoes and other vegetable plants, Minter believes it’s now more important than ever to force them into flowering earlier. “We grow 57 varieties of tomatoes, and people want to buy these plants with [fruit] already on them and tons of flowers – we can do that with all those varieties,” he reports. “We are also forcing larger-sized cucumbers, squash, zucchini, peas and beans, and even producing lettuce, kale and celery in larger sizes. Folks want to purchase larger, more advanced plants, especially late in the spring. They don’t want to plant seeds and have to wait.”

By applying the same strategy, Minter’s sales of perennials, such as astilbe and hostas, are also on the rise. “Customers buy it if they see it in bloom,” he observes. There are also great sales opportunities, he notes, for longer-blooming or repeat-blooming perennials, and for more specialty vegetables.

Stan Kochanoff, decades-long owner of Environova Planning Services and Maritime Landscape Services of the Annapolis Valley, Nova Scotia, notes that fruit trees are favoured among many seniors in the area, and also among members of the Lebanese community in Halifax. “Apples, plums, apricots and more, and they want mature trees,” he says. “They will go to orchard owners and ask if they will part with a few trees. Sometimes they will, but the trees are at least $200,” he adds. “People don’t want to wait for little trees to grow.”

In with the old, and the new
In Robert Spencer’s view, consumers are still firmly grounded in traditional plant choices, “especially if they are just getting started,” notes the president of the Alberta Horticultural Association and commercial horticulture specialist at the provincial Ministry of Agriculture & Forestry. “That being said, I think that people will also include a few different things [for interest]…. people are growing unusual or interesting variations of the traditional.”

Home Depot Canada reports that Canadian consumers “are still in love” with traditional favourites such as geraniums and petunias. The firm states that “geraniums are the most popular annual flower nationwide because of their bright blooms, ability to withstand varying temperatures and long-growing season.”

Kochanoff agrees that geraniums are still popular in his area of Nova Scotia, as are small bell petunias. “Ornamental grasses are very trendy here,” he adds. “I know two or three landscape architects in the region, [and] all they use is grasses. There’s also a shrub called rugosa rose that withstands the salt and wind, so it’s very popular by the seashore.”

Denis Flanagan, public relations and membership manager at Landscape Ontario Horticultural Trades Association, agrees that there is still interest in old-fashioned favourites like peonies, and “anything with fragrance” like lilacs and gardenia. Other popular classics include sweet peas, nasturtiums and cosmos, says Minter, and lupins, foxglove and delphiniums for perennials. Because Minter’s team forces many of them into flowering early, Minter reports that “they are like magnets to consumers.” He also expects the relatively new giant perennial hibiscus to sell well again this summer. Although it doesn’t get going until later in the season, it tolerates the summer heat, Minter notes, “and the huge blossoms are a real showstopper.”

Well-loved for its beauty and fragrance, consumer interest in the classic rose is being boosted through Canada’s National Hardy Rose Program. The initiative, led by Vineland Research and Innovation Centre in Vineland, Ont., produces rose varieties that meet consumer preferences – low-maintenance, disease-resistant plants that bloom continuously and are winter- hardy to -40ºC. Named the 49th Parallel Collection, their first rose, Canadian Shield was released in 2017. Their second rose, Chinook Sunrise, was launched earlier this year, and a third rose named Aurora Borealis will be released in 2021.

In Cullen’s view, whether a particular plant has been around for decades or just a short while, the vast majority of gardeners want plants that meet their needs. “New or not, whether it’s an annual or perennial, it needs to suit their purposes,” he says, “whether that’s a long flowering period, cut flower use, pollinator use, colour, drought tolerance and so on, or a combination of these factors.”

The influence of social media
Generally, consumer purchases are guided by many factors, but for plants, Spencer believes they are more likely to follow the suggestions of other people they know. As with other spheres, the influence of social media can be strong. Personally, Spencer notes, “I know that seeing pictures of new or interesting things on Instagram makes me consider planting them, or at least raises my awareness of the possibilities.”

As a business strategy, Minter places a large emphasis on identifying and connecting with social media influencers. Minter’s team ships them new ‘showstoppers’ and makes themselves available as expert consultants when possible. In particular, Minter believes that online image sharing of novelties such as ‘Angel Wings’ senecio and ‘Canary Wings’ begonia have helped to drive up sales. “There are lots of really cool things out there now,” he notes. “More Canadian growers and retailers need to go to the IPM show in Germany in January to see what’s new and coming.”

Minter also thinks it’s absolutely critical that retailers are aware of what the major seed breeders are promoting on social media, billboards, TV and magazines – and to make sure that these plants are on hand. He stresses the importance of always having stock, especially the most popular varieties, available at the right time. “We should never be out of white impatiens and white alyssum, for example.


Related
Looking back towards the future: State of the industry
Consumers drawn to the unusual at garden trials
Social media strategies to promote your garden centre
Adapting to the evolving needs of today’s consumers