Oct. 11, 2010, Amsterdam – CleanGrow introduced its new multi-ion
measurement system capable of analyzing up to six ions simultaneously
during this week’s Horti Fair in the Netherlands.

Oct. 11, 2010, Amsterdam – CleanGrow introduced its new multi-ion measurement system capable of analyzing up to six ions simultaneously during this week’s Horti Fair in the Netherlands. 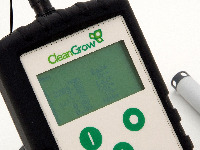 The product combines a carbon nanotube-based sensor with a multi-ion meter for on-site measurements and real-time feedback. Currently optimized for horticultural applications, the easy-to-use instrument is also a natural fit for other applications where existing sensor technology falls short of meeting complex measuring requirements. For growers, it offers a “lab-in-hand” solution – a quick and affordable way to maintain the proper nutrient balance required for better yield, improved flavour and colour, greater disease resistance and longer shelf life. Early users include research institutes and commercial vegetable greenhouses.

The new CleanGrow product is one of 10 shortlisted by Horti Fair for this year's prestigious Innovation Award.

Controlling the concentration of nutrients in liquids is a vital step in the fertigation process. Today, nutrient levels are tested daily, most commonly by measuring pH and EC, and samples are often sent to offsite labs for analysis. This traditional testing protocol is time-consuming and costly, and delays access to information on potential yield-threatening nutrient levels. Moreover, with testing largely limited to pH and EC levels, growers receive only a crude representation of nutrient levels. The CleanGrow solution offers a new class of technology that greatly broadens the range of testing options.

According to Professor Heiner Lieth, a crop ecology expert at the University of California, Davis, “there are numerous opportunities in soilless horticulture for advances in ‘precision agriculture.’ The development of advanced sensor technologies, in conjunction with simultaneous control and optimization of moisture and nutrients, for example, has the potential to drive production to efficiencies never seen before, resulting in improved yields and a superior product.” 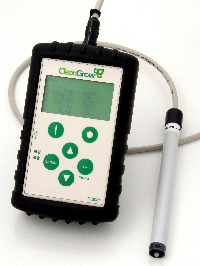 CleanGrow executives will be on hand at Horti Fair at stand 04.0226 in the House of Technology. Also at Horti Fair, Lieth will discuss the new CleanGrow product at a talk titled, “Decision support tools for managing plant nutrition within plants and rootzones in soilless culture” on Oct. 12 at 17:00.

The CleanGrow multi-ion sensor is available in two probe configurations. One is capable of measuring up to six essential ions simultaneously while the other can measure up to four. The standard six-ion probe can measure ammonium, calcium, chloride, potassium, sodium and nitrate. The four-ion probe measures ammonium, calcium, chloride and potassium.

Probes can be ordered to measure a combination of up to six of a wide range of ions. These include: ammonium, barium, bromide, cadmium, calcium, cyanide, chloride, copper, fluoride, iodide, nitrate, nitrite, perchlorate, pH, potassium, silver, sodium and sulphide. CleanGrow also offers a single-ion sensor.

The multi-ion sensor is reliable over a wide range of ion concentrations (0.05 to 60,000 ppm, depending on the ion) and across a broad temperature range (5 to 50ºC). The probe is only 180 mm long and no more than 16 mm wide. The meter weighs just 500 grams and is totally portable with a battery life of 100 hours of continuous use. Set-up and calibration are easily accomplished using the accompanying menu-driven PC software and by following the step-by-step instructions on the hand-held device. The user can easily set acceptable tracking and measurement ranges, and expanded reporting capabilities make it easy to review and compare past data.