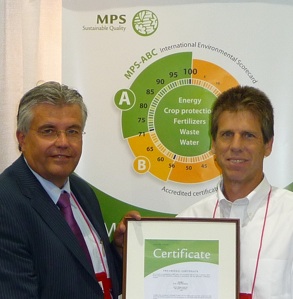 MPS-ABC certification earned by U.S. grower
The MPS certification program has been active in
more than 50 countries, and there is now growing interest in North
America.

July 17, 2009 — The MPS certification program has long been active in more than 50 countries, and there is now growing interest in North America.

“The MPS-ABC certificate is a valuable management tool,” said company president Doug Cole. “It works like a rating scale, indicating the level of sustainability of your operations. The certificate has fully proven its value in the market. Thousands of MPS-ABC certified flowers are sold worldwide every day.”

Cole said North American interest in sustainability measures “is remarkable and still growing. “I expect that many other U.S. growers will have their companies certified for MPS-ABC as well.”


Related
Growing In The Green: June 2007
THE FUTURE OF AQUAPONICS LOOKS BRIGHT AT BROOKS
GROWING IN THE GREEN: January 2008
Container-mania