This technique could reduce nitrogen use in chrysanthemum production by 75 per cent. 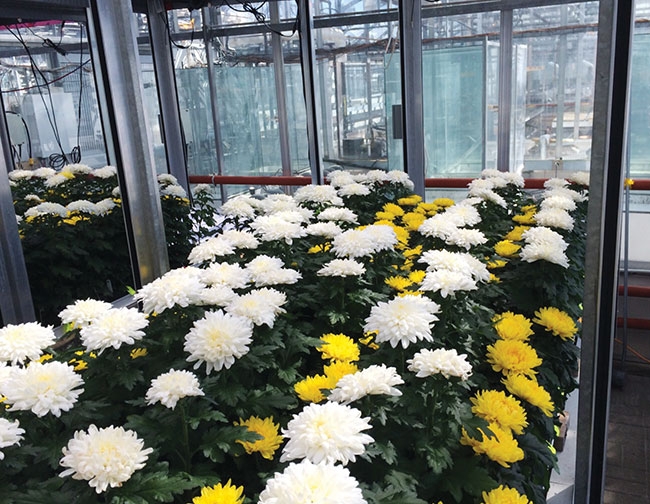 There is increasing interest in Canada and globally in improving nutrient management in floricultural operations. Typically, this involves the constant delivery of lower levels of nutrients during the crop cycle, resulting in the production of plants with quality acceptable to both growers and consumers.

Approximately six years ago, we began to develop a novel and innovative approach in which a constant low level of nutrients is delivered during vegetative growth only, and this low level is optimized so that reproductive growth is satisfied mainly by the use of these previously-acquired nutrients, rather than direct root supply. We chose sub-irrigated chrysanthemum, a popular potted plant, as our model system. To date, we have conducted research greenhouse trials on nitrogen (N) delivery, measuring yields, assessing plant nutrient status using visual diagnosis, and determining the balance of N inputs and outputs in various plant parts as a function of crop development. By applying this method, we found that the delivery of N over the crop cycle can be reduced by as much as 75 per cent compared to current industry standards. If these trends hold true for other plant nutrients, our strategy could transform the production of chrysanthemums in particular, and potentially pave the road for the low-input production of other floricultural crops.

Chrysanthemum is one of the most common potted greenhouse floricultural crops in Ontario, as well as Canada. Current commercial guidelines for greenhouse-grown potted chrysanthemums suggest at least two options for supplying fertilizer-N over the crop cycle: continuous feeding during both vegetative and reproductive growth stages with relatively high levels of N (250-400 ppm N); and, feeding during the vegetative growth stage with relatively high levels of N, followed by a declining step-wise gradient during the reproductive stage, which culminates with only water in the final 10 per cent of the growth cycle.

N removal during the reproductive stage
In our initial study published in 2014, we used an ebb-and-flow bench sub-irrigation system. Plants of the cultivar ‘Yellow Favour’ were individually grown in a naturally-lit research greenhouse using four-inch pots containing a 50/50 peat:perlite mixture adjusted to pH 5.4. They were disbudded, resulting in single-stemmed flowering plants (i.e., the shoot). Approximating the industry standard, 260 ppm N was supplied to all plants during the five-week vegetative growth stage. Then, six separate N treatments (lacking all other nutrients) were tested on different groups of plants during the reproductive stage until the flowers were fully opened (approximately five weeks later): 260 ppm N; 260 ppm N with water on alternate days; simple removal of the N supply; and 220, 175 or 130 ppm N.

Dry matter yield and total N of the shoot (including flowers, stems, petioles and leaves) were not significantly affected by the N treatments. However, the N usage index (i.e., shoot dry matter x (shoot dry matter:shoot N content)), an indicator of N use efficiency, was significantly increased only with the complete removal of N during the reproductive stage (Fig. 2), and there were no symptoms of N deficiency on the lower leaves of these plants. This finding suggests that interruption of the N supply, as well as other nutrients, promotes sufficient movement of stored N from previously-developed leaves and stems to satisfy flower development. By removing N during the reproductive phase, the N supply was reduced by 50 per cent over the crop cycle without adverse effects on yields and visual characteristics of the plant and flower.

N reduction during the vegetative stage
In our subsequent study published in 2017, we used an ebb-and-flow trough sub-irrigation system with disbudded plants of the cultivars ‘Olympia’ and ‘Covington’ (Fig. 1). Each trough represented one of three N levels, ranging from 260 ppm to 130 ppm N, which were supplied during vegetative growth only. In all cases, N supplies and other nutrients were removed during reproductive growth.

We found no visual symptoms of N deficiency with any treatment, regardless of cultivar (Fig. 3). There was no effect of treatment on total dry matter yields, N contents of the plants, and the movement of N from the stem and leaves to flowers during reproductive development. However, another indicator of N use efficiency, N uptake efficiency (i.e., shoot N content:N supply), was significantly increased with decreasing N levels (Fig. 4). This suggests that the N supply could be reduced by 50 per cent during vegetative growth, compared to industry guidelines, without negative effects on plant and flower quality.

Next steps
To date, we have shown that the combination of two delivery strategies, N removal during reproductive growth and constant low N during vegetative growth, produces high quality chrysanthemum plants and flowers, while reducing their N requirements to approximately 25 per cent of the current industry standards over the course of the crop cycle. Our strategy for delivering nutrients to sub-irrigated chrysanthemums is highly original, benefitting from the plant’s inherent ability to redistribute most nutrients during reproductive growth and/or nutrient stress, and to efficiently absorb nutrients during a relatively low nutrient supply. Ongoing research is expanding our survey of the macronutrients, as well as the micronutrients, under research greenhouse conditions. Future research will seek to validate this optimized nutrient delivery strategy with both sub-irrigated and drip-irrigated chrysanthemums in a commercial greenhouse setting. If successful, this would reduce nutrient usage, the volume of concentrated nutrient-rich solution for management, and environmental contamination, leading to the possible development of new fertilizer formulations.

Chrysanthemum growers will benefit the most from this particular research, but it may be possible to expand the fertility recommendations to other ornamental crops, and to indoor recirculation/hydroponic systems for vegetables and cannabis. Furthermore, our novel nutrient delivery strategy could result in plants with a more favourable nutrient balance, and potentially lead to improved pest resistance and post-harvest shelf life.

Acknowledgements: This research was funded by the Canadian Ornamental Horticulture Research & Innovation Cluster and Agriculture & Agri-Food Canada under the Growing Forward 2 Program, as well as the Cecil Delworth Foundation. Thanks to Specialties Robert Legault Inc. for providing custom pot mix.

For more details, see the articles, “Impact of various combinations of nitrate and chloride on nitrogen remobilization in potted chrysanthemum grown in a subirrigation system” and “Optimizing supply and timing of nitrogen application for subirrigated potted chrysanthemums”, which are published in the Canadian Journal of Plant Science.

Barry J. Shelp, PhD, and William J. Sutton are professor emeritus and graduate student, respectively, in the Department of Plant Agriculture at the University of Guelph. Bill MacDonald is a former graduate student at the University of Guelph, and now professor of Horticulture and coordinator of the Commercial Cannabis Production Program at Niagara College. For more information, please contact Dr. Shelp at 518-824-4120 ext. 53089, or bshelp@uoguelph.ca.