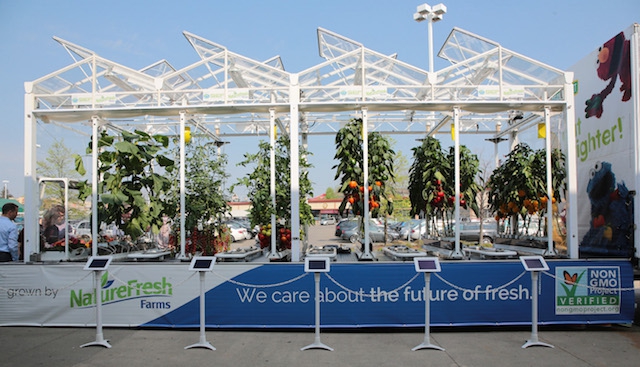 May 15, 2015, Cambridge, Ont. – In an effort to educate consumers on how greenhouse produce is grown, NatureFresh Farms recently unveiled its custom designed mobile “Greenhouse Education Centre” to hundreds of customers at Loblaw Companies owned Zehrs store in Cambridge, Ontario.

“To say the unveiling at Zehrs was a success would be an understatement,” said NatureFresh Farms president Peter Quiring.

“The reception we received was fantastic. Customers throughout the entire day were very keen to learn how we grow, what type of medium we used, how were the plants fed, and if the fruit they saw on the vines in front of them was actually real.”

The Greenhouse Education Centre (GEC) is a custom-built, 38-foot long mobile micro-greenhouse attraction. It was designed and built by NatureFresh Farms’ sister company South Essex Fabricating (which has built more than 1,500 acres of greenhouses – www.southsx.com).

A GREENHOUSE ON WHEELS

The GEC contains a variety of mature, live fruit bearing tomato, bell pepper, and cucumber plants. Positioned as a living greenhouse on wheels, the GEC’s purpose is to educate consumers on how their produce is grown, from seed to cultivation.

Custom designed growing cassettes with a clear Lexan tray filled with recyclable coconut husks reveal the type of growing medium the plants are thriving in.

The GEC is equipped with a unique heating, venting, and irrigation system that resembles what a greenhouse would be built with.

Additionally, a live bumblebee eco-system is part of the display showing how bees pollinate live plants and travel back to their hive with the nectar & pollen extracted from the flowers.

“For the last few years we have taken a micro version of our greenhouse to both trade and consumer related shows and events with great success,” Quiring explained.

“We saw an opportunity to take the lead and educate people on how we grow greenhouse produce at NatureFresh, right from seed to picking ripe fruit off the plant. What really captivates people is that when they see the greenhouse, they see how simple the growing process really is.”

A HIT WITH SHOPPERS

Consumers are impressed with the display.

“Our customers really enjoyed the Greenhouse Education Centre today, it helped them understand how greenhouse produce is grown,” said the store’s produce manager.

“They got to talk to the growers directly which really never happens.”

In addition to the GEC outside the store, NatureFresh had an attractive display of eatbrighter!™ themed packaging in store for purchase.
Produce clerks were especially busy throughout the day replenishing the horseshoe-like display with more tomatoes, peppers and cucumbers.

“Our idea of taking a greenhouse in to the city (#GreenInTheCity), direct to the consumer, is to not only educate but help people make informed decisions going forward,” said Chris Veillon, director of marketing with NatureFresh Farms.

Part of the company’s brand position for the GEC involves using the PMA endorsed eatbrighter! movement messaging to encourage customers of all ages to make healthier choices.

The back door of the GEC trailer is a full graphic promoting eatbrighter! with images of Cookie Monster holding bell peppers, Big Bird with tomatoes, and Elmo with cucumbers. NatureFresh is in the process of developing a variety of traditional and interactive materials to distribute at future events.

“I really liked learning about the bees and how they pollinate the flowers, to see them in that huge box was pretty cool,” said Matthew, age 10, from Cambridge.

The Greenhouse Education Centre will be on tour throughout North America this year with key stops at select retailers, schools and consumer events.