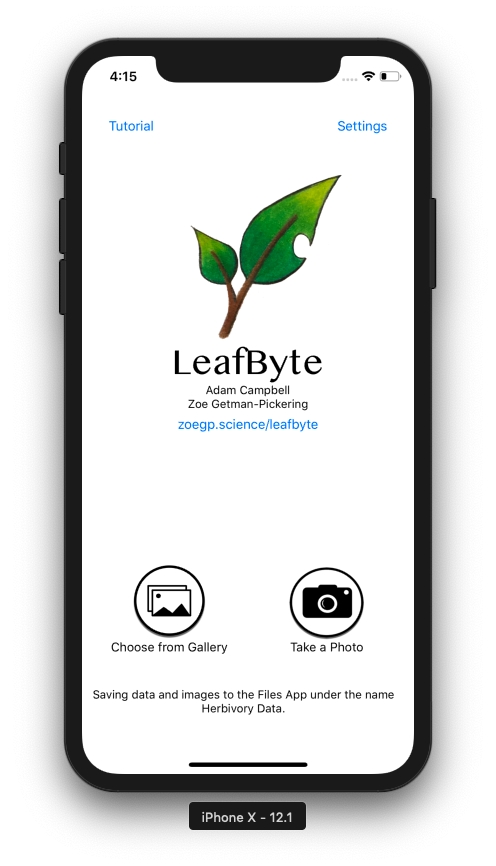 A free, open-source mobile app now lets everyone from plant researchers to gardeners and farmers know exactly how much damage insect pests cause when they chomp on leaves.

LeafByte – built primarily by current and former Cornell graduate and undergraduate entomology students – lets users take a photo of a damaged leaf and quickly receive accurate data on how much of the leaf pests have eaten.

The app, available for iPhone users, can analyze an image in an average of 25 seconds. Existing programs for tabulating herbivory provide incomplete data, can take five to six minutes per leaf, or can cost up to $10,000 for a device.

“Many labs in the fields of ecology and entomology and plant breeding measure leaf area consumed by insects to compare how well-defended the plant is against herbivores, to compare the viability of different plant cultivars, and to compare insect preference and performance,” said Zoe Getman-Pickering, one of the app’s creators and a doctoral student in the lab of Jennifer Thaler, professor of entomology, and of ecology and evolutionary biology.

The app was invented for research purposes in Thaler’s lab, to measure plant resistance to Colorado potato beetles and caterpillars and to gauge the efficacy of using predatory stink bugs or fungus to counter the beetles. The group had been using other leaf-reading software, but found it complicated and time-consuming: It took up to six minutes per leaf, a drawback when analyzing hundreds of samples.

To use LeafByte, users must draw or print out a piece of paper from the LeafByte site with four dots in a square. The square must be large enough to contain the entire leaf. One side of the square must be measured and entered into the app to provide scale. When the photo is entered, the app will automatically calculate total leaf area, and leaf area and percentage consumed.

The app benefits gardeners interested in tracking the enxtent of damage to their vegetables, and farmers who use integrated pest management programs and must monitor their crops for damage that signals it is necessary to apply a pesticide. The app does not identify the pests that cause the damage. Researchers could also potentially use it to measure fungi growth on petri dishes or butterfly wings that are bitten by birds, for example.

“Our app has a number of features that improve on previous methods of measuring herbivory,” Getman-Pickering said. LeafByte automatically saves data in a convenient spreadsheet to an iPhone or Google Drive. It can read and record barcodes that are frequently used by plant breeders to track different cultivars. Since it works with a photo, leaves may be left untouched on the plant. It can be used with either a dark or light background to provide contrast. Finally, LeafByte corrects for skew when leaf photos are taken at an angle.

The app was launched for iPhone in January and is available in the App Store. Getman-Pickering and colleagues are waiting to see if there is enough interest to create an Android version.