What makes consumers choose certain pre-mixed planters over others? Contrasts in colour and texture seem to be key. 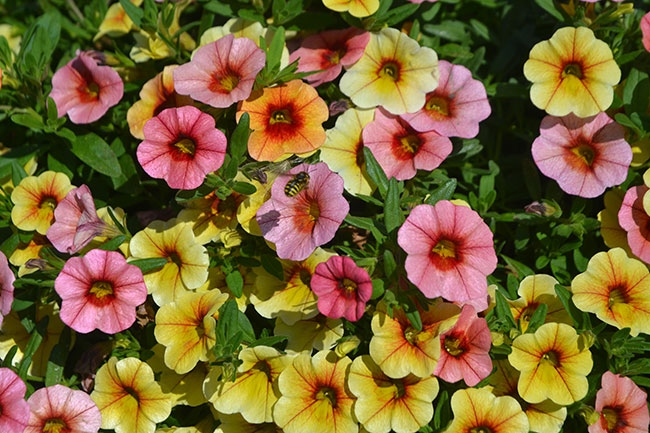 The pastels in this ‘Trixi Batting Eye’ combination give off a soft look. Photo: R. Tschanz

Pre-made mixed planters have been gaining popularity over the past couple of years. But what makes an attractive mix? Researchers at the University of Guelph and Vineland Research and Innovation Centre saw an opportunity to gain a better understanding of consumer preferences for container plants.

Volunteers attending a public outdoor event at the University of Guelph on June 2017 were asked to create their own planter by selecting three plants from among 21 common annual container plants. 312 attendees, most of them young women between the ages of 18 and 25, gave their feedback.

Among the plants presented to participants, a clear winner emerged, with 40 per cent of the participant-made planters containing a pink Hypoestes. Overall colour was the main driver for selection and pink plants tended to be selected the most while red plants tended to be selected the least. Examination of the plant genus in the most and least selected plants confirmed the importance of colour as no one genus was consistently in the top or bottom categories. For example, pink zinnias were among the most selected and red zinnias among the least.

Another way to categorize container plants is in terms of the role they play in the container: they can be categorized as “fillers”, “thrillers” or “spillers”. Fillers are plants mainly used as foliage backdrops, thrillers are plants with striking features and spillers are plants that trail over the side of the pot, adding dimension. The most popular combination in this study included two plants classified as thrillers and one filler. It is possible that consumers selected thrillers more often simply because they are more eye-catching. Among the younger demographic, which buys plants less often, a “showy” option might also encourage purchase.

Preliminary findings from the current study point to two trends for this younger consumer group: the first being a preference for pink-themed containers and the second, a higher ratio of thrillers to other categories in a container.

A question remains, did participants choose those plants because they felt they blended well or because they genuinely liked the plants they selected? In order to answer this question a follow-up study was conducted at the Annual Plant Trials open house in Guelph, Ontario in August 2017. Feedback was collected from 97 volunteers, most of them aged 51 or above.

This time, volunteers were shown a subset of the same 21 annual plants from the previous study and asked to select their most and least preferred individual plants. The result? Despite the older demographic and different question format, the same plant, a pink Hypoestes, came out on top. Unlike the previous study, plants with red flowers and foliage also made an appearance among the top selected plants. The results suggest that consumers first select their favourite plant, in this case a pink Hypoestes, and then continue by adding plants that compliment their first selection.

The pastels in this ‘Trixi Batting Eye’ combination give off a soft look.

Next, the participants were shown commercial pre-mixed planters and asked to select their most preferred and least preferred mix. Here, more than any one colour, contrast was found to drive preference for pre-mixed planters. Contrast can be achieved by a large difference between the colours and textures of a planter. Texture, in the context of this study, was defined as the degree to which plants have distinctly different shapes and architecture. Texture and colour contrast can be enhanced by the vibrancy of each colour, the number of “thrillers” per planter, and creating patches of single colours within the planter as opposed to plants of different colours intermingled throughout. Mixed planters with a high degree of contrast were found to be the most preferred, while mixed planters with the least amount of contrast were the least preferred. The mixed colour planter, which was the most preferred, had distinct areas of vibrant red, yellow and purple flowers, while the least preferred planter had muted yellow and white flowers which were intermingled throughout. The top performing planters also had a higher ratio of larger flowers that could be considered “thrillers” to smaller flowers which could be considered “fillers”. It is interesting to note that red flowers were present in the most preferred planter.

Although the general trend favoured high contrast planters, there was one exception. One of the most preferred planters had very little contrast in terms of both texture and colour. The planter in question consisted of pastel yellow, orange and pink flowers, all of the same variety. This very low amount of contrast gave the planter what many consumers described as a “soft” look. To investigate whether an interaction between colour and texture exists, a follow-up study is planned for the summer of 2018. The basis of this study will be to determine whether high colour contrast planters must also have a high level of texture contrast to be acceptable to consumers, as well as whether planters with low colour contrast can be equally as acceptable as long as they have a low level of texture contrast.

Based on the results of the current study it’s recommended that pre-mixed planters contain a high level of contrast in colour and texture. Contrast is enhanced by:

This research was funded in part by the OMAFRA-University of Guelph Partnership Program.

Amy Jenkins, MSc. is a research technician, Dr. Alexandra Grygorczyk is a research scientist and Dr. Amy Bowen is the research director of Consumer Insights at Vineland Research and Innovation Centre. Rodger Tschanz is the ornamental trial garden manager at the University of Guelph.