March 1, 2013, Coldwater, MI — Meijer has something customers have been
missing: fresh, vine-ripened Michigan-grown tomatoes year-round, even in
the middle of winter, thanks to Mastronardi Produce’s state-of-the-art
hydroponic greenhouse in Coldwater.

March 1, 2013, Coldwater, MI —Meijer has something customers have been missing: fresh, vine-ripened Michigan-grown tomatoes year-round, even in the middle of winter, thanks to Mastronardi Produce’s state-of-the-art hydroponic greenhouse in Coldwater.

“Meijer has a longstanding commitment to buying locally-grown produce when available as long as the quality meets our high standards,” said Jerry Suter , vice president of fresh for the Grand Rapids, Mich.-based retailer. 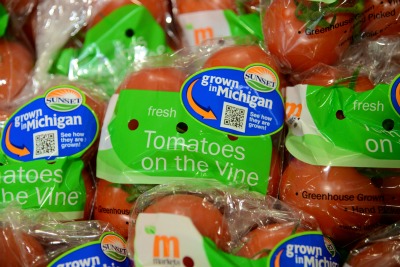 “This is really unique and exciting because Meijer customers can purchase locally grown tomatoes in the winter, which is well beyond Michigan’s traditional tomato growing season.”

Michigan tomatoes typically grow from late July to October, but the technology at the Coldwater greenhouse allows for fresh, high quality fruit regardless of outdoor conditions.

The Coldwater greenhouse is the first of its kind in the Midwest, utilizing unique grow lights, water filtration systems and alternative energy sources that create an internal climate that ensures optimal growing conditions 12 months a year.

“Meijer is one of our oldest customers in the U.S. and has been a great partner for over 40 years. We have collaborated on many new items and projects like this. We talked a few years back about our idea of the Coldwater greenhouse project and Meijer was on board before we built.”

Meijer has purchased from local growers since the company’s inception, but the retailer’s effort to buy local has expanded over the past five years as the focus on local became more important to customers. 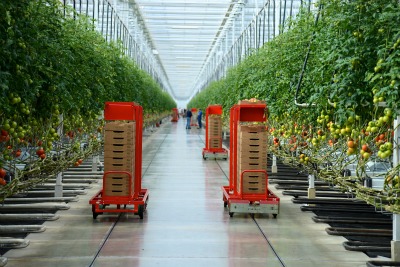 Meijer is currently the largest purchaser of local produce in the markets it serves and locally-grown produce accounts for 30 per cent of all produce sold at Meijer stores during the peak season.

A recent survey of Meijer shoppers found that 51 per cent said that supporting local farmers is the biggest benefit of buying local produce at the grocery store.

Nationally, 48 per cent of shoppers report looking for locally-sourced products when shopping, according to the Food Marketing Institute’s U.S. Grocery Shopper Trends Report.

Meijer works with more than 100 local growers and businesses – up 25 per cent over the past five years – within its five-state footprint, representing an economic impact of more than $80 million annually.

By purchasing local, Meijer is able to cut fuel consumption, which is not only good for the environment, but also helps reduce transportation costs and keeps fresh produce prices down for customers.

Meijer began purchasing tomatoes from Mastronardi Produce, which is based in Leamington, more than 40 years ago and was excited about the unique opportunity to give customers Michigan-grown tomatoes in the winter.

The Markets of Meijer tomatoes on the vine grown in the Coldwater greenhouse showcase a sticker on the bag that states “Grown in Michigan.”

The Coldwater facility was completed in December 2011 and features 30 acres of greenhouses. Mastronardi plans to double the acreage over the next two years – providing more locally grown produce for customers.

Click here to view a video highlighting the Michigan-grown tomatoes in the winter. please visit http://youtu.be/PK24WYWOAxU.