“This is a great opportunity for our company to market our gourmet greenhouse vegetables with Disney, one of the most recognized brands in the world,” said executive vice-president Paul Mastronardi.

Mastronardi Produce signed an agreement with Imagination Farms to market greenhouse tomatoes and mini cucumbers throughout North America last year. The first Disney Garden cases will ship from Mastronardi in early April starting with products in packaging that features stars from "High School Musical," one of Disney’s fastest growing and most popular properties.

“We previewed a variety of our Disney Garden prototype packaging and displays at the PMA in Orlando and were met with rave reviews from customers,” said marketing manager Chris Veillon. Under the agreement, Mastronardi will be marketing Pom Pom Toms™ Tomatoes, Greenhouse Grape Tomatoes, and Mini Cucumbers.

THE DISNEY GARDEN
“One of the reasons we have partnered with Mastronardi for the greenhouse category is their demonstrated category leadership through the development of propriety varieties along with their innovative marketing programs,” said Imagination Farms CEO Matthew Caito. “The Disney Garden program is a multi-layered approach to selling more fresh produce and Mastronardi is a company that understands this, along with o 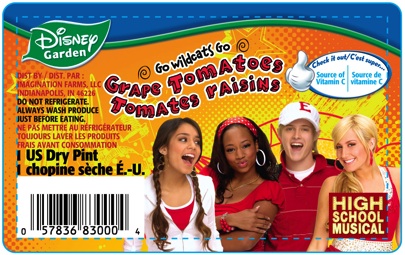 ur other Disney Garden co-packers.”

Mastronardi Produce is one of nearly 30 co-packers who market Disney Garden fresh produce throughout North America with over 300 unique fresh produce items.

Mastronardi Produce/SUNSET® is a pioneer and an industry leader in the gourmet greenhouse industry that grows and markets nationally recognized brands such as Campari® Brand Cocktail Tomato, Splendido™ Grape Tomatoes, and Champagne Cocktail Tomatoes™ under its Sunset® label. The company has been family-owned and employee-managed for more than 50 years.