There are numerous trials and research projects for annuals and
poinsettias carried out each year, but the minor crops – such as
cyclamen – are largely ignored. There’s minimal feedback from cyclamen
growers compared to poinsettias. I would guess there are about five
million cyclamen pots grown each year in southern Ontario. 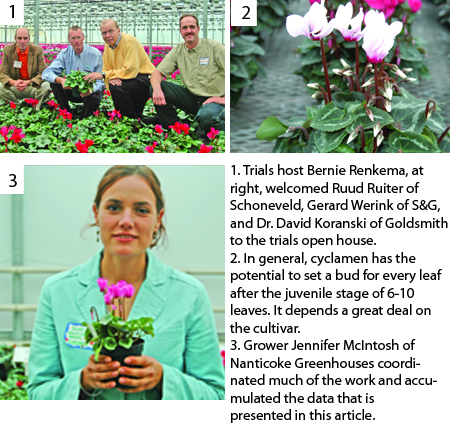 There are numerous trials and research projects for annuals and poinsettias carried out each year, but the minor crops – such as cyclamen – are largely ignored. There’s minimal feedback from cyclamen growers compared to poinsettias. I would guess there are about five million cyclamen pots grown each year in southern Ontario.

Grown properly and with good quality results, cyclamen is like any other crop and will be profitable, provided shrinkage is less than two to three per cent.

In 1981, when I started growing cyclamen at Fernlea Flowers, there were only one or two F1 hybrid series with a few cultivars. Now, there are probably over 300 F1 cultivars! With so much choice available, and with every breeder telling us their variety is the best, hosting a cyclamen trial where the cultivar itself is the only variable is a good idea. I was involved in such a trial in 2005, lasting from March seeding through to the end of October with the accumulation of data.

The purpose of the trial was to find:

• percentage of germination per cultivar

• number of leaves and buds at sales time

All the cyclamen was propagated at Sobkowich Greenhouses in Grimsby, Ontario. The company is a propagator for Proven Winners and other annual seed material. In addition, they grow over 1.5 million cyclamen Ellegaard liners.

The seed was placed in Ellegaard 105s, which means 105 liners in an 11" x 21" flat. This means a density of 65 liners per square foot. This translates to twice the size (with two weeks of extra growth) liner compared to the 125 liner per square foot liner if the 200 flat is used for cheaper liners.

The Ellegaard 105 is proving to be worth the extra room it occupies, which translates into only a few extra pennies compared to the 200 size.

All Ellegaard liners were started in a dark germination chamber with a temperature as close to 16ºC as possible. They were taken out after 21 days and placed on mesh benches, where high humidity was still provided until germination was complete and the seed coat was off the cotyledon.

The trials, from liner to the finish stage, were conducted at Nanticoke Greenhouses in Simcoe, Ontario. They produce mainly 6" cyclamen. Jennifer McIntosh is the grower who coordinated much of the work involved with the trials and accumulated the data that is presented in this article.

The same data and calculations apply to the 6" and 8" sizes.

Here are some observations about the 4" trials. The percentage of germination varies between 60 and 100 per cent. The average for all varieties is 85 per cent.

The flowering dates vary from Oct. 8 to Oct. 31. If your sales specs dictate to have more flowers, then more weeks have to be added.

N.B. The summer of 2005 registered record high temperatures, and such conditions will delay flowering dates. For every day the average temperature is above 32ºC, flowering is delayed by a day. Some cultivars are more heat-resistant than others, but all will suffer from extreme high temperature. Not only is the flowering date delayed, but quality also suffers and disease losses are greater.

The potential for more flowers is greatly improved if we have the optimal weather conditions and can provide the ideal cultural requirements.

The number of leaves in Column 6 is approximately 15-18 less than what is recorded. This was because small, immature leaves were not counted.

In general, cyclamen has the potential to set a bud for every leaf after the juvenile stage of 6-10 leaves. It depends a great deal on the cultivar.

During the open house, Bernie Renkema, owner/president of Nanticoke Greenhouses, led a tour of the facilities. The day included a group discussion and highly informative presentations by Goldsmith, Schoneveld and S&G representatives.

A great deal of work went into the trials: our thanks to Sobkowich Greenhouses, Nanticoke Greenhouses, and the participating breeders.

Cyclamen is a good value crop for the consumer. These kinds of trials show which cultivars will best help us meet market demands, and how we can do so in the most economically effective way.

Melhem Sawaya of Focus Greenhouse Management is a consultant and research coordinator to the horticultural industry. Comments on this or any other article are always welcome by e-mailing him at
focussawaya@kwic.com.