News
Many golden memories for UFG during gala

April 1, 2013, Burnaby, B.C. — It was an evening to celebrate some golden memories for flower growers in this province.

April 1, 2013, Burnaby, B.C. — It was an evening to celebrate some golden memories for flower growers in this province.

The co-op was formed in 1963 when six original members rented a small warehouse in East Vancouver. The flower auction began and over the years has expanded and transformed into the largest live Dutch style flower auction in North America.

For the anniversary, a video was produced that highlighted the history and changes over the years. It showed what would be considered primitive technology in comparison to today’s software and Internet-based selling system.

UFG board chairman John Kerkhoven introduced Brian Minter as emcee for the evening – who in turn introduced the special guests and a few notable growers and buyers in attendance.

There were several provincial MLAs in attendance, including Rob Howard (from Richmond) who brought a congratulatory message from the province. Burnaby Mayor Derek Corrigan also congratulated the organization on behalf of the city.

Gerald and Bert Den Haan, two of the partners of Fraser Nurseries, one of the founding members, attended the festivities, as did Simon Hogewoning, a grower who shipped in 1963 and is still active today.

One of the more memorable moments of the evening was the introduction of Vern Havbo, a buyer since 1963. He declared, though, that the Monday auction after the anniversary would be his last.

The auction gallery was expertly decorated with floral products donated by UFG grower members. The remarkable design work was done by volunteers from the Canadian Professional Floral Designer Association.

UFG staff members Darlene Kump, Olive Gonzalez, Dennis Lawson and Bob Pringle were thanked for their work on the celebration, as was past CEO Tom Mulleder, who helped put together the video.

The video is a historical look at the flower auction over the decades and will shortly be posted to the UFG website. The success of UFG is largely a result of a commitment from its member growers and the continuous upgrading of facilities and technology over the years.

The current auction system, which was developed in-house over the last six years, is fully accessible online and UFG boasts several hundred buyers who access the auction remotely on a regular basis. 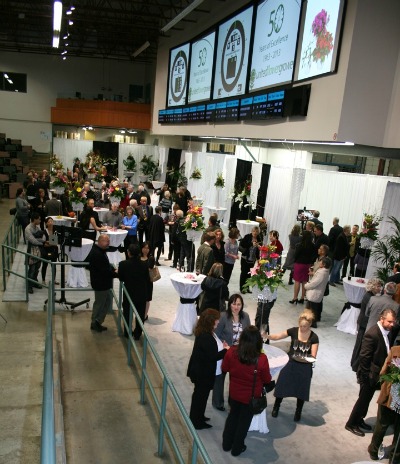