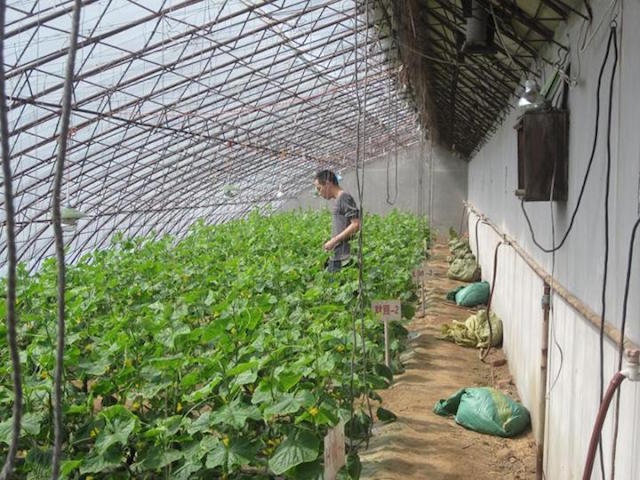 Researchers in China studied the co-application of manures and chemical nitrogen fertilizers in high-input greenhouses. They said the environmental risks may outweigh the benefits. Photo courtesy of Zhi Quan.

Jan. 7, 2016, Shenyang, China — Nitrogen (N) is an essential nutrient for plant growth, and nitrogen fertilization – including the application of manures – is a major management strategy in agriculture across the globe.

However, the overuse and misuse of manures has resulted in the accumulation of surplus N in soil and its eventual migration to soil layers and groundwater.

The authors of a new study found that the environmental risks of manure applications in high-input greenhouse environments may outweigh the benefits, and recommend that the role of manures be re-examined.

The study, published in the November 2015 issue of HortScience, reports on a three-year experiment conducted in greenhouse soil rotationally planted with cucumber or tomato and lettuce with and without manures. Scientists investigated the spatial (vertical) and temporal dynamics of nitrate, extractable organic nitrogen (EON), and total nitrogen in soil, and estimated the leaching-dominated N loss based on N balance in soil.

Results showed that application of manures slowed acidification but accelerated salinization of the fertile greenhouse soil, and did not significantly enhance the above-ground fresh biomass and biomass N in most of the vegetable seasons during the three-year experiment.

The experiments also indicated that high-rate application of manures resulted in high accumulation of not only non-extractable N but also leachable N (including nitrate and EON), consequently intensifying leaching-dominated N loss.

“Our study showed that enhanced accumulation of mobile N induced by excessive manure input could exceed the need of plant uptake but be subject to downward migration and leaching-dominated loss,” the authors wrote.

The researchers recommended that the role of manures in high-input agricultural ecosystems be reexamined to balance the economic benefit and the environmental risks of enhanced nitrogen loss.

The complete study and abstract are available on the ASHS HortScience electronic journal website.