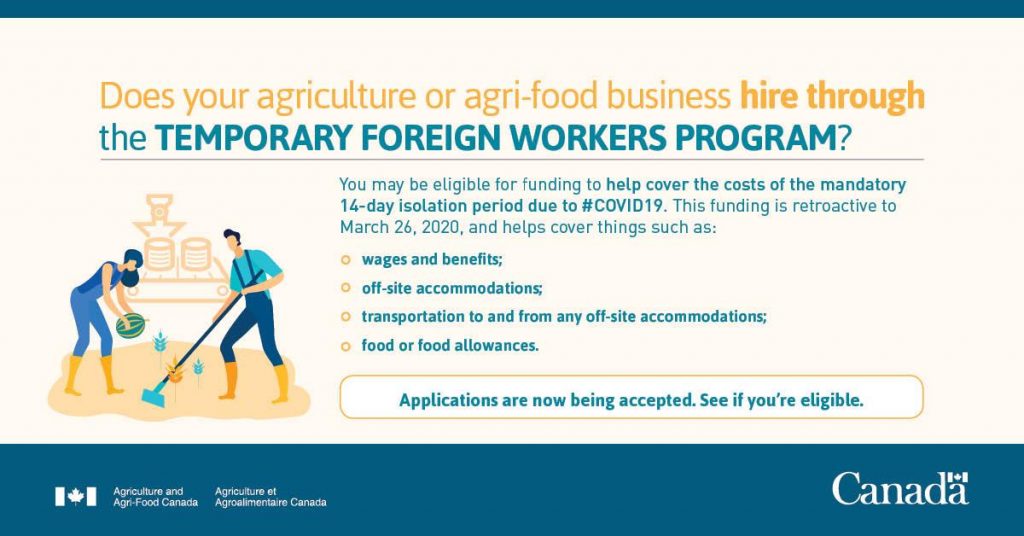 The decision follows Ottawa’s announcement to extend the Quarantine Act to the same date. The Act requires temporary foreign workers to undergo a mandatory 14-day isolation period upon arriving in Canada.

The $50-million Mandatory Isolation Support for Temporary Foreign Workers Program is helping employers in the farming, fish harvesting, and food production and processing sectors with some of the incremental costs incurred to keep these workers safe and healthy during that 14-day period.

Under the Program, the federal government will provide a maximum support of $1,500 for each temporary foreign worker, to employers who are required to isolate workers under the Quarantine Act.

The funding is conditional on employers not being found in violation of the mandatory 14-day isolation protocols or any other public health order.

“Producers and processors across the country rely on experienced migrant workers to ensure a stable, nutritious and affordable food supply for Canadians. This pandemic has put additional strains on growers and processors, and our Government will continue to support them in these challenging times,” says Marie-Claude Bibeau, Minister of Agriculture and Agri-Food.

Eligible costs under the Mandatory Isolation Support for Temporary Foreign Workers Program could include wages, food, benefits, transportation, housing, and other requirements to comply with the protocols under the Quarantine Act. In some cases, an employer’s costs may exceed the $1,500 federal contribution per temporary foreign worker.

Temporary foreign workers play a vital role in the Canadian economy with approximately 50,000 to 60,000 foreign agricultural, food and fish processing workers coming to work in Canada each year, which accounts for more than 60 per cent of all foreign workers entering Canada under the Temporary Foreign Worker Program.