The two-spotted spider mite has known resistance to over 95 active ingredients. 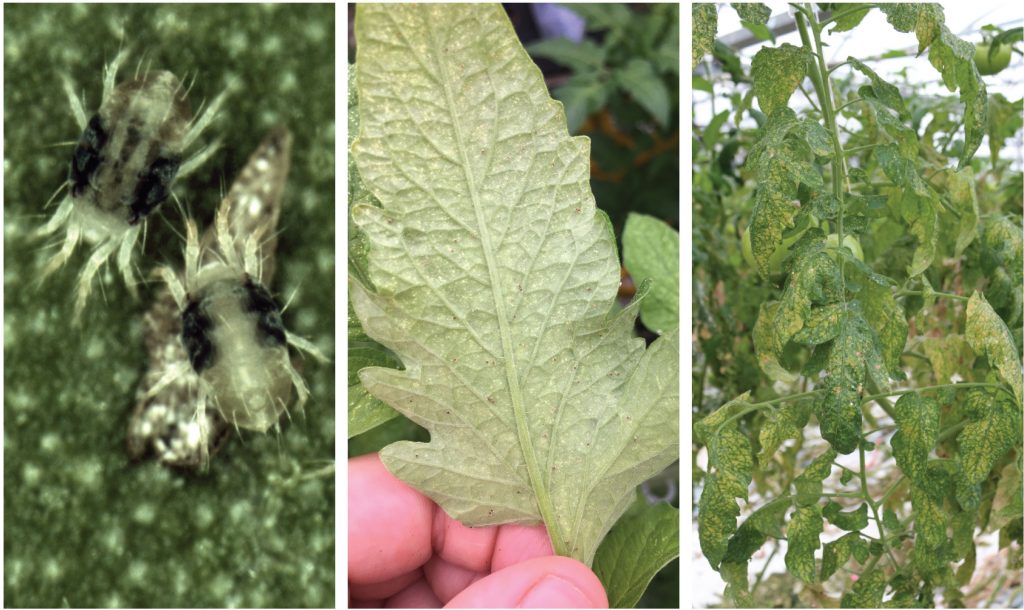 Horticultural crops in Canada, although grown on a smaller acreage than field crops, are of increasing importance to the agricultural economy. Greenhouse tomato production in Ontario contributes over $354 million annually, but insect and spider mite pests reduce the yield of the tomato crop and are the target of many management programs.

Chemical pesticides have been the mainstay of pest management practices, but public perception and environmental concerns have led to restrictions and demands for safer products. One of the most problematic pests, the two-spotted spider mite (TSSM) Tetranychus urticae (Fig.1) is an economically important pest that feeds on more than 150 crops worldwide, including greenhouse tomato. TSSM is also at the top of the list of global pests that are resistant to pesticides, specifically acaricides, the chemical products developed to control spider mites. TSSM have known resistance to over 95 active ingredients.

Agriculture and Agri-Food Canada (AAFC) researchers have studied greenhouse TSSM populations that growers have reported difficulty controlling with acaricides, aiming to confirm the presence of resistance or reduced susceptibility. The results of the surveys can provide the grower and industry with information to develop a resistance management strategy for the next season.

The two main resistance mechanisms in spider mites are increased metabolism and target site mutation. Metabolic resistance is the most common mechanism, and it occurs when internal enzymes in the resistant mites detoxify the acaricides faster than in susceptible mites. Resistant populations may possess enzymes at higher levels, in more efficient forms or with a broad spectrum of activity that can degrade many different acaricides. A gene mutation or gene substitution can lead to alterations at the acaricide target site in the mite. This modification can prevent the acaricide from binding, thereby reducing or eliminating the toxic effect of the acaricide.

The rate of resistance development depends on several factors, including how fast the pest reproduces, migration and host range of the pest, availability of nearby susceptible populations, persistence and specificity of the crop protection product, as well as the rate, timing and number of product applications made. Resistance increases faster in environments such as greenhouses where insects or mites reproduce quickly due to relatively stable temperatures and lighting, with no pressure from natural enemies unless biological controls are present. Greenhouses also provide an environment where there is little or no immigration of susceptible individuals. The term ‘pesticide treadmill’ is commonly applied to situations where continued applications over time cause pests to evolve resistance to the pesticide, and the resistant strain becomes increasingly difficult to control at the labeled rate and frequency. If growers respond with more frequent applications of the pesticide, both the intensity of resistance and the frequency of resistant individuals in the population increase. Problems of control continue to worsen as more product is applied. The overuse of acaricides can not only lead to resistance, but the increasing number of treatments will disrupt other components of the pest management program (ie. biological controls), leading to severe spider mite outbreaks.

Managing resistance
Resistance management refers to preventative actions that reduce or slow the development of resistance. Two components of resistance management are the use of economic thresholds and integrated pest management (IPM) strategies. Growers are always encouraged to consult their crop advisors about the economic thresholds of each target pest prior to spraying pesticides. For example, acaricides should be used only if mites are numerous enough to cause economic losses that exceed the costs of the application. Exceptions would be the use of preventative treatments (ie. Dichlorvos/DDVP for cleanup at the end of the season) for early/late season pests that will usually reach damaging levels as soon as a new crop is started. Applications of acaricides must be timed correctly, typically before populations of TSSM are out of control. The use of spray rates and application intervals recommended by the manufacturer, and in compliance with local agricultural extension regulations, is essential. Apply acaricides carefully, as the margin for error in terms of dose, timing, coverage, etc., takes on even greater significance as resistance increases.

A key element of effective resistance management is the use of alternations, rotations, or sequences of different acaricide classes with different modes of action (MoA). Resistance or cross-resistance could result from repeated use of products with the same chemistry or of related products in the same MoA class, either within the crop cycle or year after year. Cross-resistance is the discovery of resistance to one pesticide in a pest population that had no previous exposure to it, except that the population was already resistant to a second product with the same MoA. There are several classes of acaricides registered in Canada and recommended for use on spider mites in greenhouse tomatoes. A few of these products have been registered for many years, including abamectin and pyridaben (over 20 years), bifenazate, spirodiclofen and acequinocyl (over 10 years), whereas chlorfenapyr and etoxazole were registered within the past five years.

Surveying the situation
Over the past six years, surveys of acaricide susceptibility by AAFC researchers in Ontario greenhouses have indicated that the overuse of the same product, or a related product, were responsible for observed reductions in acaricide susceptibility. For example, where no or few products were applied, bioassays with registered acaricides indicated that TSSM populations remained susceptible to all or most products tested (ON1 and ON3 populations in Fig. 2A). In contrast, in greenhouses that used mainly one or few alternate products repeatedly, more instances of reduced susceptibility or resistance were observed (ON2 and ON4 populations in Fig. 2A). There were also incidences where resistance occurred with products not previously applied in the greenhouse; these were cases where cross-resistance was suspected. Fewer incidences of reduced susceptibility or resistance to acaricides were observed in greenhouses where alternations or products from two or more classes were applied, or spot spraying of mite outbreaks was used (ON5, ON6 and ON7 populations in Fig. 2B). Caution should be taken by growers in selecting and using acaricides and implementing a resistance management plan. 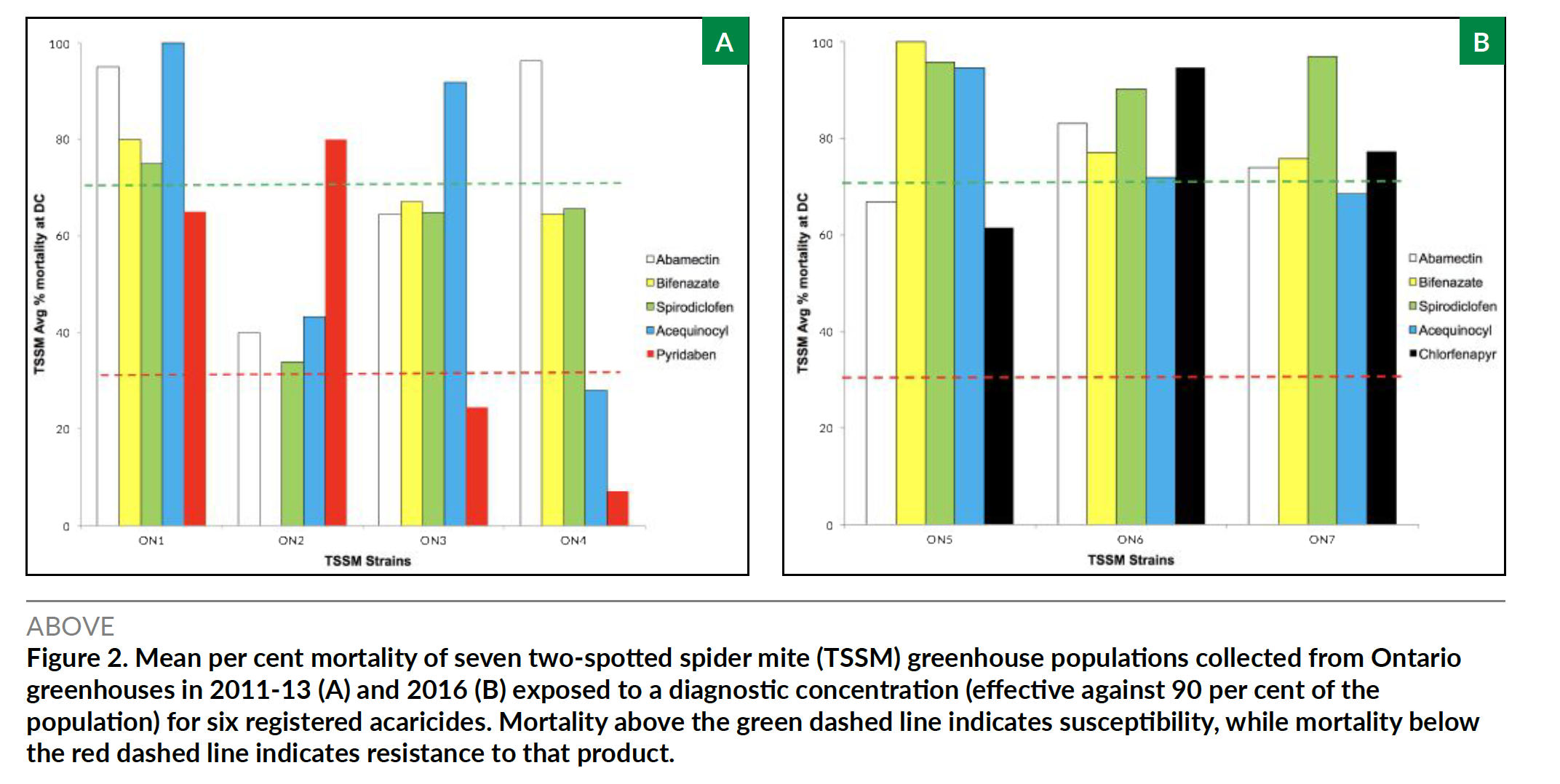 Control strategies
IPM is the incorporation of as many different control strategies as possible, including synthetic pesticides, biopesticides, beneficial insects (predators/parasites), cultural practices, transgenic plants (where allowed), crop rotations, pest-resistant crop varieties and chemical attractants or deterrents. TSSM can be controlled biologically by the predatory mite, Phytoseiulus persimilis. Other predatory mites used against TSSM include strains that are tolerant to high temperatures or pesticides. For example, the predatory mite Amblyseius californicus can reportedly better tolerate dry conditions, while A. fallacis is resistant to some pesticides. Amblyseius andersoni is another predatory mite that has a wide range of temperature tolerances. Many Ontario growers have had good success with these predators.

In sum, acaricide resistance is a growing concern for greenhouse tomato growers who are dependent on foliar acaricide treatments for TSSM control. This reliance has led to resistance in an increasing number of TSSM populations. Timely use of bioassays to detect reduced susceptibility or resistance is an important part of a resistance management program, and the development of molecular diagnostic tools would improve the speed of resistance detection. Other solutions to combat mites are the focus of current research at Western University in London, Ontario. Researchers are developing novel strategies for TSSM control based on genomic and metabolomic platforms. The two-fold approach is to identify new biopesticides from: 1) plant-produced defense metabolites that decrease mite performance and 2) candidate genes that can be targeted by RNA interference (RNAi) for development of next generation RNA-based pesticides. There is a critical need for the development of new and sustainable TSSM control measures, ones with different modes of action relative to existing pesticides, with specificity for TSSM and without impact on beneficial predators and the environment.

Ian Scott, PhD, is a research scientist at Agriculture and Agri-Food Canada. He can be reached at ian.scott2@canada.ca.