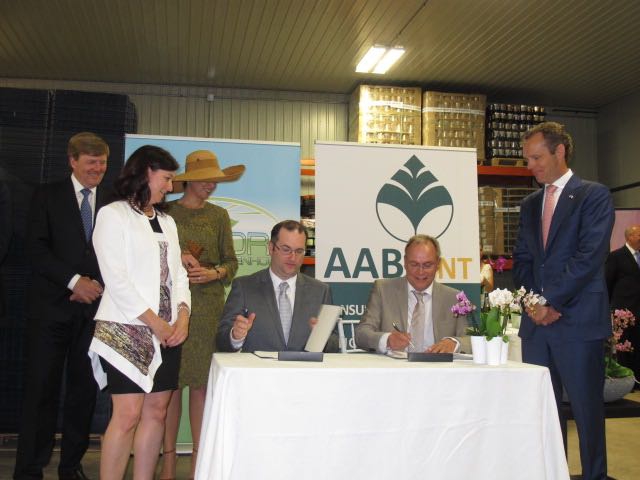 Taking part in the signing ceremony were Caroline Fradet and Eric Dube from Serres Toundra, and Pieter van Velden and Aad Janssen from AAB. Looking on are King Willem-Alexander and Queen Máxima.

May 28, 2015, Beamsville, Ont. – News of a major greenhouse project being developed in Quebec with the guidance of a Dutch consulting firm were announced yesterday during the state visit of King Willem-Alexander and Queen Máxima of the Netherlands.

Representatives of AAB Nederland b.v. signed an agreement with Serres Toundra that involves a call for tenders for the first phase of a greenhouse complex expected to eventually grow to 40 hectares in Saint Felicien, north of Quebec City.

The signing ceremony was held during the Royal Tour of CosMic Plants, a leading North American orchid greenhouse operation.

After having conducted a feasibility study, AAB was granted the contract by Serres Toundra for designing a greenhouse horticulture business that will eventually encompass some 40 hectares of cucumber production.

Heating will be partly supplied by using waste heat from a nearby paper mill.

The greenhouse complex will be erected in four phases. The design also includes a section for propagation.

In addition to bank financing, the project is co-financed by a pension fund and the Quebec government.

Working on behalf of Serres Toundra, AAB will purchase the necessary technology and knowledge production worth $100 million. The majority of these investments (expected to be approximately 90 per cent) will be tendered to Dutch companies.

AAB is a service provider with consultants, engineers and brokers who specialize in horticulture. It will provide construction management of the complete project and employment and management consultancy to Serres Toundra. The cultivation guidance and the supervision of the propagation program have already been outsourced to Dutch companies.

AAB (www.aabnl.nl) has over 30 years of experience and it was founded with the vision of operating as a consultant for the horticultural industry offering expert knowledge, sharing expertise, being decisive and providing solutions-focused advice.
Businesses outside the horticultural sector are also clients of AAB.