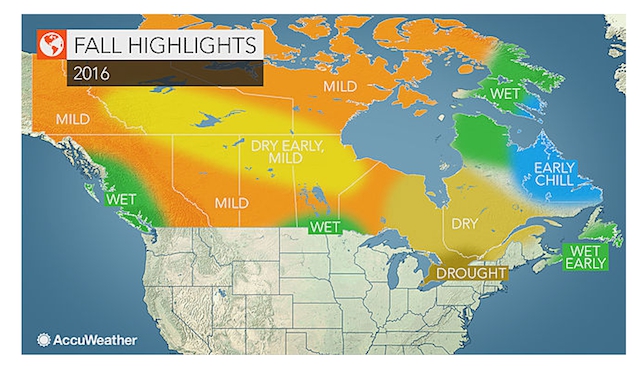 Aug. 22, 2016 – AccuWeather reports those waiting for crisp autumn air to arrive will wait longer than normal this year, as mild conditions dominate much of the country this season.

The upcoming La Niña may also begin to shape the weather pattern across Canada later in the season, helping to send waves of rain along the Pacific coast.

DROUGHT TO DECREASE INTENSITY OF FALL FOLIAGE IN CENTRAL REGIONS

“Rainfall will remain below average for the upcoming season from southwestern Ontario through southern Quebec, including the cities of Windsor, Toronto and Montreal, which means little relief for the drought situation,” AccuWeather senior meteorologist Brett Anderson said.

The drought conditions could have an impact on this year’s fall foliage, affecting when trees across the region begin to shed their leaves and how vibrant the colours will be.

“Lack of rainfall and resulting stress to trees over eastern Canada could result in an early leaf fall this upcoming season, which means some early colour, but not as colourful or sustained as it normally is during peak times later in the season,” Anderson said.

The dry weather across much of Ontario and Quebec will also promote higher-than-normal daytime temperatures, especially early in the season.

Homeowners with pools may be able to keep them open a few weeks later than normal.

While it is warm and dry in southern Ontario and southern Quebec, a different weather pattern is expected farther east.

According to Anderson, Nova Scotia and Newfoundland could experience one or more tropical systems, which would bring spells of wet weather to the provinces. This is especially likely during the first half of the season.

Meanwhile, fall will arrive earlier than normal across Labrador as multiple fronts usher chilly air across the region.

MAINLY DRY AND MILD ACROSS THE PRAIRIES

Not only is a mild and dry season forecast for Ontario and Quebec, but also for many areas across the northern Prairies and into the Rockies.

“Much of central and eastern Canada will experience a warmer fall compared to normal,” Anderson said.

Minimal ice and snow cover in the Arctic will be a contributing factor to the mild weather pattern.

“Sea ice extent over the Arctic regions of Canada is currently running 10 to 30 per cent below normal for this time of year, and we expect this situation to persist into the fall,” Anderson said.

“Lack of snow and ice cover in northern Canada will help keep much of the region warmer to much warmer than normal later in the season as cold air masses from the far north are more easily modified.”

Much of the northern Prairies are also expected to be drier than normal; however, some spells of wet weather are in the forecast for the southern extent of the region.

“Showers and thunderstorms will be common across the southeastern Prairies into the first half of the season,” he said.

This may include some episodes of severe weather in southern portions of Saskatchewan and Manitoba, mainly during the first half of the season.

While most of Canada will experience a warm and dry autumn, a much different weather pattern will unfold along the Pacific coast.

“An active storm track off the Pacific will lead to a wetter fall compared to normal for the western half of British Columbia, including the cities of Vancouver and Victoria,” Anderson said.

The frequency of rain will gradually increase as fall progresses, making the second half of the season wetter than the first.

Although autumn is typically a wetter time of year than the summer months, warm waters in the Pacific Ocean will play a role in the uptick in this season’s wet weather.

“The blob of warm water that has been a dominant factor off the West Coast over the past two years has faded, but water temperatures are still anticipated to average slightly above normal along the West Coast through the upcoming season, which may help enhance rainfall in western British Columbia,” Anderson said.

Additionally, a weak La Niña is forecast to develop. This pattern sometimes translates to wetter weather in areas near the coast.

This La Niña-enhanced rainfall along the coast of the Pacific may continue into the winter months, helping to shape the weather pattern across the country into the start of 2017.