“Sadly, we have just learned that Peter Thiessen has passed away this Valentine's Day – February 14, 2012.  Many of you will remember Pete as an active member of the industry and we all appreciate his years of service and commitment to the floriculture sector.

“A message from the family:

“Gloria, Mark, Janet, Andrew and Krissy Thiessen and family are deeply saddened to deliver the news of the passing of Peter Thiessen, our dearly Loved Husband, Father, and Grandfather who died on Valentines Day February 14, 2012, after a three-month courageous battle with cancer. He was 69 years old and loved his family deeply and had a passion for growing roses. What a fitting day for Dad to pass away on Valentine's Day, Dad’s favourite time of the year as a grower. A keen golfer and passionate farmer, "Farmer Pete" will be sorely missed by his many friends and family.

“Details of the funeral are being finalized and can be found on the Reid Funeral Home website, Leamington location:  www.reidfuneralhome.ca ."

The following story ran in our May 2010 edition, part of our coverage of the annual Flowers Canada Ontario awards program.

Dr. Mike Dixon (at left in photo) of the University of Guelph presented Thiessen with the FCO Research and Innovation Excellence Award. 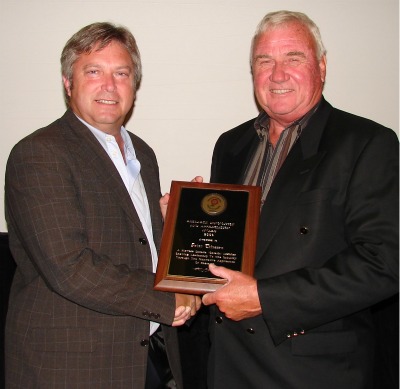 Thiessen has been an industry leader for more than 40 years, said Dr. Dixon.

Thiessen studied at Michigan State in the early 1960s, and was influenced by the work of Dr. Paul Krohn, a leading cut rose researcher. Thiessen also researched the feasibility of extending the cut mum harvest season. After returning home, he planted the family’s first rose crop in 1965. “There began many years of experimentation and funding of research with Dr. Jim Tsujita at the University of Guelph, which, in 1980, resulted in one of the first commercial applications of supplemental lighting of roses at Thiessen Greenhouse Flowers.

The greenhouses grew over the years to total some 75,000 square feet with various cut flowers, though primarily roses. The farm now has extensive apple orchard operations.

“Peter has always been a strong supporter of associations and research all his life,” said Dr. Dixon, including Roses Incorporated, the Joseph Hill Foundation, and the Fred Miller Rose Research Fund.

“He also supported the establishment of new horticulture and greenhouse facilities in the Bovey Complex at the University of Guelph,” said Dr. Dixon, “and has continued to support innovative greenhouse technology development and research at the university.”

Thiessen was a founding member of the Ontario Flower Growers Co-operative and the Inter-Provincial Flower Market in Montreal where he was a board member for several years and one-time president.

“Peter is an example of someone who believes that you get back what you give, and his leadership role in this industry has exemplified his vision to enjoy life to the fullest,” said Dr. Dixon.