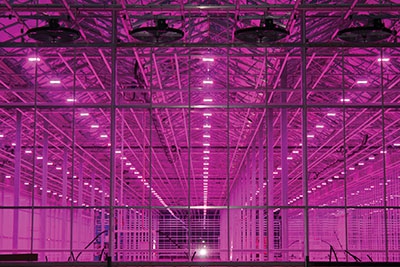 It’s no exaggeration to say that LED lighting is poised to revolutionize greenhouse cultivation.

LEDs are so much more advanced in terms of the significant and numerous benefits they offer over traditional high-pressure sodium and metal halide bulbs. They provide light at just the specific wavelengths that plants need, and are both more powerful and more efficient than traditional lights.

LEDs also produce much less heat, allowing them to be placed close to plants.

The website ReportsNReports is predicting that the global LED light market will reach $3.6 billion by 2020.

LEDs are believed suitable for any crop at any stage of development. Research around the world is ongoing into how flowering and germination patterns, growth, yield and nutritional value of fruits and vegetables are influenced by the various wavelengths of light that LEDs can provide. For example, it’s been shown that boosted amounts of “red” light can increase yield in tomatoes, as well as the vitamin C content of mustard, spinach and green onions.

IMPRESSIVE ENERGY SAVINGS
Many companies and scientists are also researching LED energy savings, and the results are quite impressive.

Paul Gray, vice-president of horticulture lighting solutions at Illumitex, says the company has focused many hours on running calculations, conducting experiments and validating a series of ROI scenarios. “Illumitex LEDs routinely deliver at least 60 per cent energy savings,” Gray notes, “along with payback periods that are less than two years.”

The research and development group at LumiGrow recently wrapped up a trial at the University of Guelph involving Dr. Youbin Zheng, David Llewellyn and Katie Vinson and three gerbera cultivars (“Acapulco,” “Heatwave,” and “Terra Saffier”).

The University of Guelph team will soon start a new round of research using LumiGrow LED lights, determining which treatments of red, blue and white light maximize gerbera crop performance and energy savings.

“In the past, biological control and bee pollination were often not as effective during the winter for various reasons, such as reduced light intensity, light quality and shorter day lengths,” Hao notes.

“The use of supplemental lighting will play a major role in increasing production practices from November to March when quantity and quality of natural light are significantly reduced.”

In controlled environmental chamber trials using HPS and LED lights, preliminary test results show a beneficial impact in increasing the number of some predatory pests, depending on the source of the supplemental lighting.

Hao is also studying how supplemental lighting affects bees and pollination. If lights come on earlier in the day, bees will come out earlier, but things have to be timed just right for the flowers to be open and ensure optimal pollination.

“From our preliminary trials with bumble bees, the use of HPS lights seemed to increase pollination efficiency and resulting fruit yield and quality,” Hao notes.

“Additional laboratory and greenhouse trials need to be conducted to validate these early results in order to develop best management practices for biological control of greenhouse pests and the use of bumble bees for pollination of greenhouse vegetables when produced using supplemental lights.”

COMMERCIAL TRIALS
AMCO of Leamington, Ontario, is one business among many looking at supplemental lighting and year-round production. Company president Fausto Amicone says they are not sure yet if they can compete in the winter months – whether consumers are willing to pay for local produce at that time of year, and at what price level consumer support might diminish.

AMCO is currently engaged in an LED lighting trial with Philips, studying the possibility of putting LEDs in all greenhouses as top and intermediate lighting.

AMCO has 80 acres of hydroponic production of tomatoes, cucumbers, eggplant and peppers, with over 200 employees.

“We are currently qualifying LED lighting with HID lighting and also only LED inter-lighting in our glass greenhouses,” says Amicone, adding that he was “excited about supplemental lighting and the opportunity that it can provide this industry…Unfortunately, we do not have enough data [at this point] to really qualify this opportunity, but I am very optimistic when understanding the results that have been experienced in Holland and England.”

He had actually started the research in early 2010 on tomato seedlings, using 14 different LED arrays with five to 60 lights, but all emitting the exact same colour/wavelength of light. He notes that one LED can produce about one-tenth to one-fifth full sunlight, so if a bunch of LED lights are grouped together at the right wavelength, the equivalent of full sunlight should be able to be achieved.

Lefsrud, along with master’s student Paul Deram and other team members studied tomatoes as well as lettuce and petunias.

With fruiting tomato plants, the researchers tested red:blue intercanopy LEDs and found that the highest production was on the 5:1 ratio of red to blue, but 50 per cent LED and 50 per cent HPS was also very strong.

“We have also tested lettuce and see higher levels of red LED (10:1 or 19:1) was better for lettuce,” Lefsrud says.

“From the lettuce research, we also reported 33 per cent savings in energy when using LED relative to HPS. Other research results are in the same areas (25 to 40 per cent savings).

“I am sure that LEDs are going to replace all other lighting systems in greenhouses, and by bringing the LEDs down to the plant or into the canopy, we can get better usage of the light by the plants,” Lefsrud says.

“Even lighting from below can improve the yield.”

GROWING INTEREST IN LEDS
He believes that direct overhead lighting systems are most likely going to disappear in the coming years.

“The final advantage of the LEDs is that the plant can now be grown throughout the season as the cost of lighting is going down, and can improve both greenhouse as well as fully internal growing systems.”

Gray at Illumitex agrees. “As technology has evolved and prices have come down, more and more greenhouse growers are seeing the benefit of supplemental LED lighting. We get numerous inquiries every day. To keep up with the world’s population boom, growers are going to have to get smarter about how they grow.

“LED’s are part of that future.”