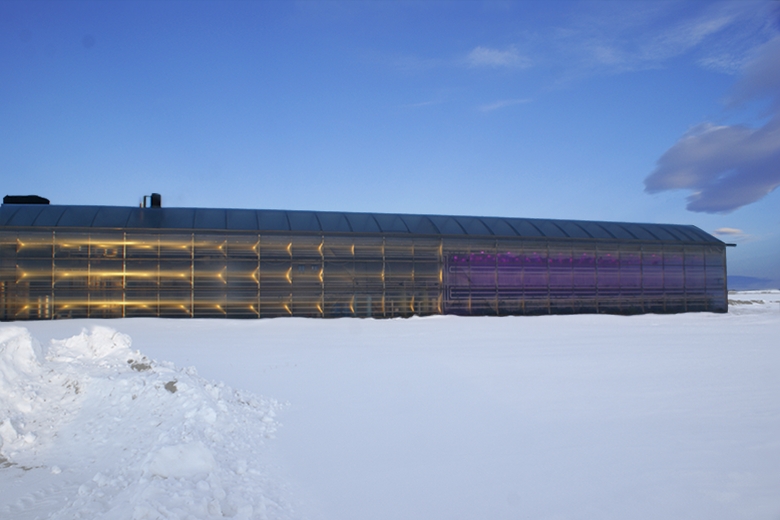 Andrew Mans initially installed high pressure sodium (HPS) lights in the greenhouse, but quickly found that they had a high failure rate.

“You couldn’t ever be sure that your HPS were still working every morning,” the co-owner of Mans Organics said. “Yes, they were under warranty and the bulbs could be replaced. But it was too many headaches when I needed the area to be at 100 per cent.”

A certified-organic, family-owned and operated farm in southern Alberta, Mans was founded in 1994 by Henk and Rita Mans, who ran it using conventional farming practices. As they learned more about the impact that conventional farming has on soil health and the health of end consumers, they decided to go organic and received their organic certification in 2007. In 2012, their son Andrew came back to the farm to join the family business and built the farm’s first 1-acre greenhouse so that they could expand into growing more vegetables year-round. Mans Organics planted and harvested their first crop of tomatoes, cucumbers and peppers in 2013.

Switching from HPS to LEDs
Tired of the HPS lights’ frequent maintenance and unreliability, Andrew began to look in to greenhouse lighting alternatives that had lower failure rates. Andrew was intrigued by the flexibility and variability that LEDs offered, and decided to conduct a trial using LumiGrow Pro 325e fixtures in his propagation area. After a successful propagation trial, he ran an additional trial with his highwire long English cucumber crop. Satisfied with how the plants produced under the LEDs, Andrew put in an order for 70 Pro 650e fixtures to light 2,500 square feet of his tomato production area. He also added LumiGrow smartPAR software so that he could adjust the lights’ spectrum and monitor the estimated energy usage.

Simple Changes with Big Results
Andrew was excited to grow tomatoes under LEDs for the first time. However, his young tomato transplants were less enthusiastic about the low light conditions they were accustomed to being transitioned to supplemental lighting at full capacity. Their leaves began to show early signs of stress and leaf damage. Using smartPAR’s view mode, Andrew was easily able to check on the plants leaf colour and caught the issue early.

Reaching out to LumiGrow for assistance, their support team identified the issue and helped Andrew put together a plan to ease the plants transition into higher yield lighting conditions. As it turns out, various crops can require an escalating transition period when going from low light to optimal light environments. With LumiGrow dynamic LED fixtures, Andrew was able to use smartPAR to dial back the red and blue light to 40 per cent of their full capacity for five days, then increase to 50 per cent for another two days. By day eight, he had all spectral channels at 100 per cent of their capacity. This smart lighting strategy was deployed and ensured higher crop health through the transition – new growth came in dark green and healthy. During production, Andrew went further to create a light program to “mimic the sunrise” – as he puts it – turning the lights on at 50 per cent capacity for the first hour then back to 100 per cent for the rest of the day.

When Andrew harvested his first crop of LED-lit tomatoes in April, he was able to harvest them a full 15 days earlier than his unlit tomato crop. This translated to shorter turn times and less time spent overall waiting for fruit to ripen, which allowed him to save on greenhouse heating during the winter months in addition to saving electricity on lighting. The LED-lit crop also had a higher yield than the unlit crop. All of these factors allow Andrew to reliably scale his tomato production, mitigate big swings in Alberta’s weather and get his tomatoes to market sooner.
Long-Term Flexibility

Andrew has also played with the spectral channels lighting his cucumbers. He noticed he was able to customize his crop. Increasing the blue light combined with a 12-hour lighting period resulted in generative, short-noding plants. He then dialed back the lights to let the plants stretch and allow the fruit to grow in size.

In keeping with organic principles, he plants a wide variety of crops and maintains a crop rotation schedule in the greenhouse to maintain his soil’s health. The ability to quickly and easily reconfigure zones and adjust spectrum to meet multiple crops needs simultaneously gives Andrew the freedom to pivot his business strategy as he chooses. If he wants to use part of the greenhouse for propagation for a few weeks out of the year, he can set that area to a seedling-friendly light program, then switch to a higher intensity light program when he moves into production. Overall, the flexibility his LED lights offer brings Andrew peace of mind.

“The question of whether or not LEDs work has long been answered for me.”