Features Business Research
Lighting and automation among themes at CGC’17

The conference featured a sold-out trade show, banquet and bus tour, and the mood on the trade show floor and in the educational sessions was decidedly upbeat. 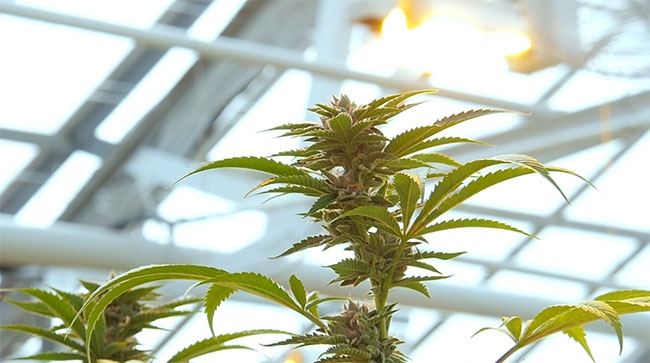 Aphria greenhouse-grown cannabis plants. Aphria was one of the stops on this year’s bus tour.

December 2017 – I’ve been attending the Canadian Greenhouse Conference for 22 years and this year’s edition topped them all.

The show was busy, from start to finish. The trade show sold out early, as did the pre-conference bus tour to the Leamington region, along with The Gathering networking banquet. The educational sessions were all quite busy with an exceptionally strong lineup of presenters drawn from across North America.

The attendees – and exhibitors – certainly got their money’s worth.

Lighting featured prominently in the educational program and on the bus tour stops.

ON THE ROAD AGAIN…
One of the first events of the Canadian Greenhouse Conference to sell out early is the pre-conference bus tour.

And this year was no exception. Eighty registrants – the capacity – toured a number of leading edge facilities in the Leamington region, the largest concentration of greenhouse vegetable production in North America.

And it’s also home to one of the largest, most innovative and progressive medical cannabis operations, too – Aphria Inc.

Tour sponsors were Union Gas and Lumigrow. The following are tour highlights.

Harrow Research and Development Centre: Tour guides included Drs. Genieve Marchand (plant pathology), Rose Labbe (entomology) and Xiuming Hao (crop physiologist). With only a limited time available during the stop, their focus was on some of the supplementary lighting research with tomato, pepper and cucumber crops. The industry trend in the vegetable sector is towards year-round production and that means lighting. Harrow is a world leader in this research.

A number of projects were featured in posters.

It showed “good potential” for suppression under short-season (spring and summer) growing conditions typical of those in Canadian greenhouses. It has been proven to consume more thrips per day than A. swirskii or N. cucumeris did in earlier studies.

It also has a higher intrinsic rate of increase producing more eggs per day than A. swirskii, A. limonicus or N. cucumberis did in earlier studies.

It also has a lower minimum temperature for growth than either A. swirskii or thrips. It also survives better and lays more eggs than A. swirskii at cooler temperatures.

It is a true generalist predator, able to feed on plant foods such as pollen as well as other prey species when target prey numbers are low.

In controlled environment cabinets, researchers showed that when reared under LEDs, HPS or winter conditions, both D. Hesperus and O. insidiosus could complete development to adulthood, but at a much slower rate than under summer conditions.

It was found that low dose of far-red light is indeed beneficial in the early stages of fruit production of tomatoes and sweet peppers grown under HPS lighting, but not for cucumbers.

Aphria: Aphria Inc. is one of Canada’s most successful medical cannabis companies. It began operations in 2014 and was one of the first licensed companies in Canada.

Welcoming the tour was Cole Cacciavillani, Aphria’s co-founder. He is an industrial engineer with 35 years of experience in the agricultural and greenhouse industry.

The new greenhouses will incorporate the latest in automated processes involving transplanting, transporting and packaging.

Aphria has developed its proprietary “509 Step Seed to Sale Certified” process, its commitment to protecting the health and safety of patients by ensuring it only sells clean and safe products. This process includes:

Anna’s Flowers: Anna’s Flowers is a leading four-season garden centre that attracts plant enthusiasts from great distances. It is truly a destination garden centre. Led by Anna Mastronardi, who is assisted by her children Rudy, Albert and Marlene, the business has grown from humble roots in 1998 to some 30,000 square feet – quite impressive for a business that began as a roadside fruit stand.

In addition to premium plants and products geared to healthy lifestyles, it also markets a broad range of locally grown produce. It is well known for its seasonal workshops for do-it-yourselfers, with more than 100 hosted each year.

Virtually every part of the packing process has been automated, and in particular the mini-cucumber line in which robotic arms are put to good use with sorting and packaging. There are a handful of workers on hand to ensure there are no bottlenecks.

He focused on a new smart irrigation system being developed. Benefits include improved labour efficiency and crop consistency, along with savings in water and energy costs. The grower doesn’t have to continually walk the crop to determine watering requirements; the system can make the necessary assessments based on crop sensors measuring such factors as average volumetric water content, average temperature and average plant height.

In one recent trial, plants grown under the smart irrigation system displayed higher overall quality than did plants irrigated by the grower. There wer also 15 per cent savings in water and nutrition.

He also discussed work on advanced sensor systems that will identify when plants are under stress.

Charles Grinnell of Harvest Automation described their work with robotics. The company focuses on robots that “do physical work, make complex decisions for sophisticated tasks, and work in mostly unstructured environments, because that’s where most ag labour is.”

He said that while robotics are a good solution, “there are challenges,” and prime among them is the cost. “Component costs are trending down but remain quite high.”

Quite often the R&D leads to “collaborative robotics,” in which a person does some of the job and the machine will do the rest. There has to be a balance between robotic capability and the cost.

He emphasized that automation doesn’t just focus on labour savings, but also on plant quality improvements and other production efficiencies.

Harvest Automation is enjoying considerable success with its HV-100 robotic container handling units, “perfect for growers who handle a lot of pots.” The units may move fewer pots per hour than a person could do, but overall they move more plants because they don’t take any breaks.

Also taking part in the session was Robert Lando of AgroNomix and Ad Kranendonk of Flier Systems.

Greenhouses are becoming increasingly larger on average, and that encourages more use of automation.

Workers are also expecting better working conditions and automation plays a lead role with this. “Just like we have to compete for customers, we also have to compete for labour,” said Lando, “and that means thinking much differently about the labour experience our employees have. Automation can be a tool that’s not just about replacing labour, but also about changing the work experience.”

European growers are big on automation, and that’s understandable given the average hourly wage rate is about $25 an hour, said Kranendonk, compared to the soon-to-be $15 an hour in Ontario.

There is considerable competition to find experienced growers, especially now since the cannabis sector is paying top dollar for them.

Automation can minimize the “undesirable physical labour” of many greenhouse tasks.

Automated transplanters, for example, mean the crop has greater consistency and uniformity when the plants reach the shipping stage.

With a successful automation strategy, the first system will pay for the next system and so on.

“Automation can help businesses do more with less labour and with a high quality product,” said Lando, all while providing employees with a more rewarding work experience.

Aphria greenhouse-grown cannabis plants. Aphria was one of the stops on this year’s bus tour.

Will Heeman is the Chief Daymaker at Heeman’s Garden Centre (near London, Ontario).

The business should have a distinct voice, something easily identifiable with the store. “People like to engage with your brand and that’s why they need to hear the same tone.”

There are a variety of social media channels, but if you only have time to do one thing, you must do it well. “You’re judged on the lowest common denominator (associated with the business). If you have an excellent garden centre but a lousy road sign, then you’re as good as that road sign.”

Be “social” with your social media. “Engage your audience in a conversation,” said Heeman. For example, ask their opinion of a new variety that’s on the market.

And respond to all comments – the good and the bad.

If a customer has had a problem, and writes in about it, use this as an opportunity to correct the problem.

People will react positively to how you handle negativity, he added. “If we’ve done something wrong, let us know so we can fix it.”

And if you’re posting flower photos, always have staff in the pictures. Customers relate to the people who they meet in your store.

And when talking about products, don’t so much talk about what it is, but more about why it’s an awesome product people should have in their gardens.

SUCCULENTS
Debbie Foisy of Deb’s Greenhouse (Sturgeon County in Alberta) described her success with succulents, and in particular with them “Leading the DIY Craze.”

Do-it-yourselfers are keen to attend workshops to make something “super pretty,” and they “really don’t care how much they spend.”

In addition to formal workshops, garden centres should have areas set aside where DIY’ers can make up their own planters. If you supply the materials and expertise, they’ll supply the enthusiasm.

Among her garden centre’s most popular programs are the Make Your Teacher a Planter workshops held in June. They attracted about 300 participants last year to an after-school drop-in program.

Pinterest is big on succulents and especially DIY projects.

When marketing succulents, be sure the planters are full and overflowing.

This DIY capability that garden centres can provide is one reason Foisy doesn’t lose any sleep over nearby big box competition. “By offering specialty service or products, we are carving out our niche.”

And if you’re not already using videos on your web site or social media, grab your smart phone and begin filming. You don’t need a script or fancy editing, just a quick report on the latest product or service you’re promoting. “Just wing it. Millenials like this approach because it’s real, it’s candid.”

“AND THE WINNER IS … ”
Rob Fluit of JVK earned this year’s CGC Volunteer Appreciation Award.

The award recognizes his many years of leadership with the conference trade fair committee.

Next year’s CGC will be held Oct. 3-4, again at the Scotiabank Convention Centre in Niagara Falls.