News
Life on Earth – and in space – relies on plants

May 3, 2016  By Lisa McLean for AgInnovation Ontario 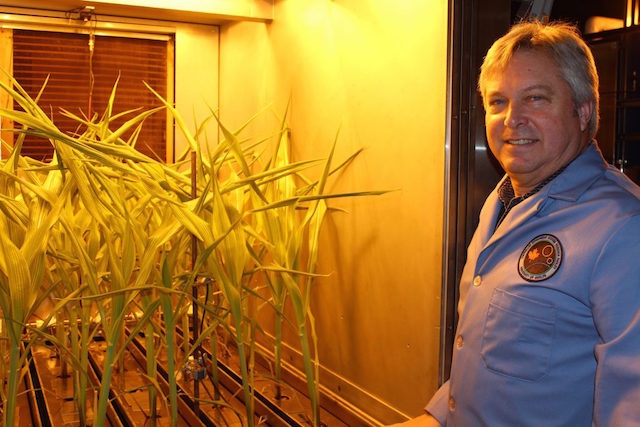 May 3, 2016, Guelph, Ont. – Plants are hardier than people. It’s a lesson Dr. Mike Dixon has learned in his lab, where he grows plants under “weird” conditions.

Someday, astronauts will apply his research to growing food crops in space, but today his findings are benefiting Earth.

Dixon is director of the Controlled Environment Systems Research Facility at the University of Guelph. The lab is the most advanced facility of its kind, housing equipment such as hypobaric chambers that allow researchers to experiment with unusual growth conditions such as reduced atmospheric pressure.

“In our lab we started out 15 years ago asking how low we could take the atmospheric pressure and still have plants producing all the functions of human life support,” Dixon says.

“Now we’re simulating other scenarios – like, what if you have a greenhouse on the moon and it gets punctured? And what if it takes a couple of hours to repair the hole?”

In Dixon’s lab, researchers discovered plants will grow at approximately one-tenth of the earth’s atmospheric pressure, and one-third of earth’s oxygen level.

Recently, in collaboration with NASA scientists on site, Dixon’s team dropped the pressure dramatically and created a vacuum to mimic greenhouse damage in space.

“The plants didn’t like it, and when we brought the pressure back up they had a little frost damage, but they survived,” Dixon said. “You and I? We would be history.”

Biological life support is an essential component of any long-term mission for space exploration. Scientists estimate each crew member would require 60 to 80 square metres of plant production to survive.

And, while there’s no mission to grow a plant on the moon or Mars today, Dixon says there are plenty of opportunities to grow plants in other inhospitable places, like the deserts of Kuwait, in Antarctica or in the Canadian North – where he has research projects in place.

“That part isn’t rocket science. It really is conventional agriculture, squeezed into a relatively small space.”

Dixon’s team has designed special modules that maximize space for growing plants, while carefully controlling conditions. Next, Dixon’s team is working to address a technical challenge he shares with greenhouse growers on earth: managing greenhouse effluent.

“It’s a huge technical challenge I have to fix, because there’s no such thing as garbage in space,” Dixon says. “We have to learn how to recycle or reuse every atom of every thing we take with us, to the best of our ability.”

Dixon’s team is working with the Canadian Space Agency and Canadian industry partners to develop individual ion sensors that will allow them to monitor the status and quality of recycling nutrient solutions.

Dixon says it’s part of the plan to incrementally advance to the point where there is a self-sustaining ecosystem in a controlled environment – but it will offer technology transfer opportunities on Earth as well.