News
LEDs in spotlight of new urban farm in Japan 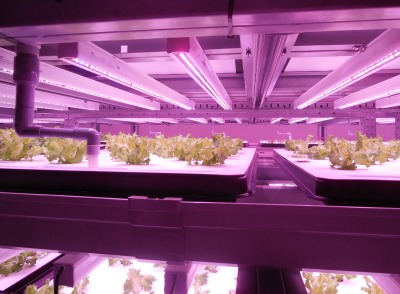 GCN City farm has been set up in an effort to promote city farms and to encourage operations on an industrial scale to produce delicious and safe fresh vegetables for consumers.

Furthermore, the farm will make a social contribution in the agricultural field by offering a verification model in which corporations, universities and the government are closely involved.

GCN City farm is expected to function as a central site that promotes the development and use of groundbreaking technology in factory plants.

GCN City farm will produce leafy vegetables, such as lettuce, every day.

Companies associated with Osaka Prefectural University will soon be able to conduct business trials from production to sale.

As the sales operation behind GCN City farm, GreenClocks will start selling the vegetables produced by the farm under the ‘Gakuensai’ brand beginning in early October.

Producing optimal light in the far-red wavelength, it is expected that the GreenPower LED production module will deliver twice the output of an HF fluorescent lamp for the same electricity consumption, according to research carried out by Kazuhiro Akima, Yuji Miyasaka, and Jun Konishi.

In addition, this LED production module can save up to 55 per cent energy compared with a conventional fluorescent lamp.