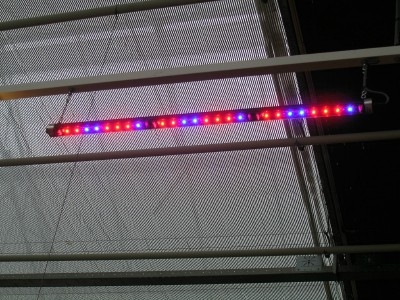 Over the next four years, a team that includes scientists from several US universities and the US Department of Agriculture will be hard at work examining all aspects of LED lighting in greenhouses.

The project’s website states that “Light-emitting diodes (LEDs) are solid state, robust, very long-lived lights.  They can also be designed to emit pure, selectable colors. What’s more, the efficiency of converting electricity to light is improving rapidly as the LED industry evolves, so LEDs are becoming more energy efficient all the time!”

“Unlike traditional light sources used in greenhouses today, the relative ‘coolness’ of LED surfaces allows them to be placed close to or touching leaves without overheating or scorching them. Thus, much less electrical power is needed to achieve the same or better plant response than with traditional lighting systems. LEDs can be designed so the colors they emit match exactly the colors most efficiently used by plant photosynthesis thus improving overall energy efficiency and giving more plant response for less light used.”

The goals of the project are to show that greenhouses can achieve a significant reduction of electricity use though employing LED lights, while achieving equivalent or superior crop response to conventional lighting sources. In terms of how the team will proceed, “LEDs will be evaluated in greenhouse trials, either to replace traditional lighting or to begin using LED-based greenhouse lighting for the first time. Plant performance will be measured by assessing health and vigor of plants, success in promoting or preventing flowering of select ornamentals, and yield of selected vegetables. Experiments will include comparisons with traditional lighting technology and no electric lighting. Energy consumption by light sources will also be measured.”