Ask any mayor or councillor in Canada where’s the best place to live in Canada, and they’ll all say there’s no place like home. For Mayor John Adams and the rest of Leamington town council, their bragging rights have been independently confirmed. 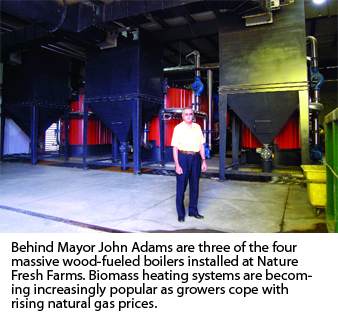 Ask any mayor or councillor in Canada where’s the best place to live in Canada, and they’ll all say there’s no place like home.

For Mayor John Adams and the rest of Leamington town council, their bragging rights have been independently confirmed.

Leamington was recently ranked Canada’s number one place to live by Money Sense magazine, a publication recognized as one of Canada’s leading sources of information on financial and investment matters.

In its April 2006 edition, writer Tim Whitehead conducted some number-crunching of 108 communities with over 10,000 in population. Leamington emerged the winner.

This was no arbitrary comparison, said the magazine. The conclusion is based on a statistical examination of these communities to “impartially figure out which communities actually do have the best combination of natural advantages and economic good fortune.”

The author looked at a number of variables, including weather conditions, housing prices, employment opportunities, economic diversity, income levels, and population growth, among others. “Leamington’s virtues include mild weather and a low unemployment rate,” noted the feature writer. “Its scores for household income and population growth are in the top 25 per cent of communities.”

Mayor Adams is a life-long resident, and a municipal council veteran of some 26 years, the last three as mayor. He’s also a life-long farmer, starting with tobacco and potatoes, before switching to processing tomatoes about 30 years ago. He and his son currently farm some 350 acres, an average size operation for the industry.

Five years ago, they seriously considered moving into greenhouse production. “We had approval to put up three acres.” However, energy price fluctuations were quite unsettling at the time, and they decided against the investment (though John now wishes they had followed through).

He’s a big supporter of the farm communities of Leamington and neighbouring municipalities, and an admirer of the growth of the greenhouse sector. “I think I know about 90 per cent of the growers personally,” he quipped.

The region’s greenhouse sector is an economic pacesetter in Canadian agriculture. With some 1,253 acres (2005 totals) in production, it features the largest concentration of greenhouse vegetable production in North America.

“It has a major impact on the region,” enthused Mayor Adams. It’s a steady generator of jobs, many of them high-tech, in both the growing and supply sides of the industry, and it has fostered the expansion of many related companies, including those in trucking and construction.

He traces the current expansion boom back to the mid-1990s, when growers began adding acreage in double-digit expansions. It settled down to more moderate expansion levels for a few years, but it has “ramped up again the past five years.”

We visited an example of that growth while setting up a photo at Nature Fresh Farms, a technological leader in the industry. The company began operations in 2000 with 18 acres under plastic, and specialized in peppers. They’ve grown steadily since then, including this year’s 31-acre expansion in glass, to some 67 acres in total. They have also expanded their product line to include tomatoes.

The town works closely with the industry on a number of initiatives, the most recent of which is a bicycle safety program geared to offshore labour. There have been some serious accidents in recent years, and the industry and local officials are working hard to increase safety awareness.

The politicians and growers also work closely to address potential problems. The rise in popularity of biomass boilers has been a “good thing,” said the mayor, in helping the industry cope with rising fossil fuel costs. However, the stack emissions can be an issue. “For most growers, we receive no complaints.”
Beyond the economic impact, the greenhouse sector always steps up to the plate when asked to support municipal projects and organizations. “Many of the growers give quite freely of themselves to community organizations or fundraisers,” said Mayor Adams. “They’re always among the first to donate time or money to any project. They’ll do whatever they can to help out.”